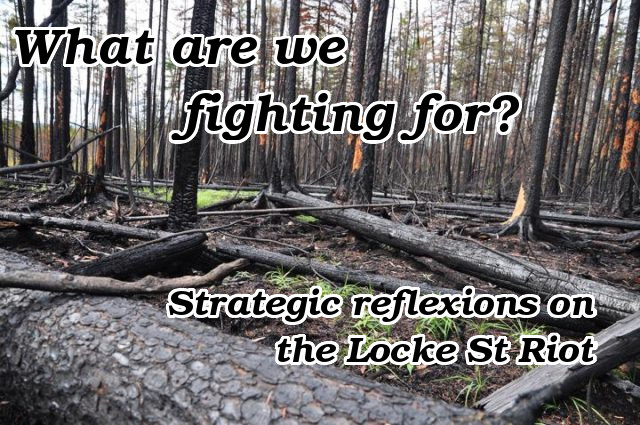 I rarely read fiction. I regret that truth and so every few months, when I get given a book of dystopian sci-fi or imaginative history, I stumble through it halfheartedly. I know that fiction has a lot to offer in terms of expanding our realm of possibility, of inspiring creation of new worlds. Someone near and dear to me once advocated for changing my reading habits by explaining that non-fiction changes what we know but fiction changes how we think. And yet, I find myself falling back into the practical guides for non-monogamy, the exposés of political corruption, the treatises on decolonial feminism. I’m driven by the internal desire to dismantle systems of dominance and hierarchy. If I can learn enough about them, maybe I’ll be better equipped to aid in their destruction. Theory to practice to theory to practice.

Of course, I don’t have to choose between fiction or non-fiction. I can let my tastes and desires ambulate between the two genres. Perhaps one day, when the problems of the world feel less urgent, I’ll gravitate towards the creative potential of fiction. But for me, right now, things do feel immediate. And grave. And aggressive. I feel as though there are battles to be fought on all fronts and me and my comrades are standing back-to-back in a circle with swords drawn. To those who say this rhetoric is alarmist, I say you’re not paying close enough attention. Or maybe living too much inside your bubble.

My politics mean a lot to me. I take them very seriously. A casual friend date with me nearly always involves discussions of autonomy or gentrification or land reclamation. I most often have weeks where I have more organizing meetings than alone time. I won’t partner with someone who doesn’t share my principles, primarily because I need to be able to confide in them and lean on them during the inevitable periods of my life where state repression will play a role. I live and breathe my convictions. But my beliefs aren’t a static set of ideas, they’re a dynamic and beautiful tapestry of truths that evolve with the introduction of new information and experiences. The only constant in this world is change, and that’s a good thing. I want this world to change.

While sometimes victory shared alongside friends shifts my politics by figuring out what works, I’m more often changed by failure – figuring out what doesn’t. The root of transformation is conflict. Friendships become stronger when arguments are resolved and commitment to the relationship is confirmed time and time again. We have a name for those shallow relations who only stick with us through the good times – fair-weather friends. We have a tendency as people to shy away from what feels uncomfortable and lean into what feels nice. There is nothing wrong with this inclination and I believe we are well served by listening to our intuition. The problem arises when these sensations are then attributed a moral value. Happiness and harmony and calm are seen as “good” things and sadness and anger and discord are seen as “bad”, instead of simply two sides of a coin. There is no way to understand joy without despair. There is no way to know peace without conflict. Hurricanes serve a valuable purpose for the sea. Forest fires are very good news to blueberries, but less so to squirrels. It’s important to remember that creation often necessitates destruction.

I do not believe that we can build a society within capitalism that rejects hierarchy and oppression, or that said society would someday grow to naturally overtake the state resulting in an anarchist utopia. My visions of the future necessitate destruction of the current order. When I raise my fist at cries of smashing the state, I literally mean as much. Sometimes that destruction looks like taking down ideas, sometimes it looks more like taking down buildings. The world is going to change whether we like it or not, the only control we have is in shifting it’s direction. I am not afraid of a drastically different world or the transition and I’ll spend my life trying to convince others to embrace the unknown in the same way. It’s going to be okay, we’re in this together. So along we go as organizers, as anarchists, as friends, traversing the tricky terrain of putting thought into action. And then something happens. Specifically, the Locke St Riot. But we can speak about this in more general terms as well.

This isn’t the first time tactics and strategy have sown division in our circles, and – we can hope – it won’t be the last. I understand the reaction from the business class in Hamilton, and I understand the reaction of my fellow anarchists to the bloodthirsty and immediate embrace of mob violence. It’s okay to be afraid. It’s okay to seek safety. But it’s not okay to write off the action as bad, or the principles behind the action as bad, because you associate your feelings of fear and discomfort and confusion as bad. I’m not writing this to ask you to accept what happened uncritically as a show of solidarity. I’m writing this to implore you to step into the confusion as an opportunity to clarify and grow your own politics. There are infinitely interesting and important questions that arise in the wake of the Locke St Riot.

Feelings of discomfort are valuable tools in assessing where we feel unclear or inconsistent in our political analysis. They help us to identify what questions we need to be asking ourselves. Am I truly willing to see the property of the wealthy seized or destroyed? To what extent do I actually support the destruction of Canadian society? How much of my own comfort am I willing to sacrifice in pursuit of a new social order? And maybe most importantly, am I prepared to accept violence as part of the revolution? Because what happened on Locke St shouldn’t be reduced to simple property destruction. There were people eating in those restaurants and sitting in cars and those people were afraid. While there was no threat to their personal safety, they also had no way of knowing that.

These are concepts that I wrestled with in the days and weeks after the riot. I came to the conclusion that I was okay with a moment of social disorder that caused some people to feel afraid. To the larger questions, posed above, the answers would read: yes, totally, most, and yes. My politics do not condemn violence as universally bad, as never the answer. My politics see the rich being afraid as inevitable. These are unpopular answers with a large segment of Hamiltonians. Living a politic that sees as much value in destruction as creation is a difficult position. And at some point putting those politics into action is going to lose us the favour of huge swaths of the population. Not everyone in this world stands to gain from a future free from oppression. Redistribution means taking from the rich, not waiting for them to give it up willingly. Direct action means doing it ourselves. And before you get ahead of me, I’m not trying to say that everyone needs to mask up and loot Locke St or lock down to a bulldozer. All revolutionary work is important, including that which remains behind the headlines. I am, however, saying that we need to remain committed to our politics and to each other even in times of great turmoil. Especially in times of great turmoil. That means not jumping ship as soon as liberals pick up pitchforks. It means not throwing the baby out with the bathwater. It means defending our spaces and our ideas. What happened on Locke St wasn’t perfect. It wasn’t some glorious moment of revolution. It was messy and provocative and emotive. It was human. And it wasn’t about creating a new world in the same way that the majority of our organizing is. It was about the urge to destroy that which oppresses us, to fight back, to defend against the gentrifying onslaught on our neighborhoods. It was about creating space. Because that is the role that destruction plays in creation. It creates space for new ideas and conversations, and sometimes new buildings, new societies, new life.

It is possible to defend destruction in its own rite. But I would argue that it is easier in the context of protracted struggle. As someone who is committed to lifelong anarchism, I see moments of destruction as necessary to make room for the project of creative growth. I can even see them as beautiful. But maybe underneath it all, what happened on Locke St makes you uncomfortable because you see the downfall of capitalism as a lofty aspiration and not a real goal. Perhaps you realize, on some level, that you would be satisfied with more equitable treatment and access under the current system. That what you are really fighting for is a bigger piece of the pie. I argue that those are feelings you have a political responsibility to explore. If you decide that your unease with the riot was grounded in a belief in pacifism, then argue it. But maybe you realize that you’re just a little scared. Scared of coming to terms with what your politics really mean. Scared that living your beliefs will inevitably lead to the loss of your security. It’s okay to be scared. Fear can cause us to freeze and it can cause us to run, but it can also cause us to fight. And that is what I’m asking for. Don’t pontificate on social media, don’t denounce The Tower, don’t try to force anarchism into a pacifist box – step into the struggle and hold your friends tight. Talk about tactics. Sharpen your politics. Prepare yourself for what comes next.

A recent article in the local news ended with flimsy conjecture about the meaning of the flaming, crumbling tower that acts as the symbol of our local anarchist social center. With just a bit of digging, the author could have discerned that it was a reference to The Tower tarot card. A card that represents upheaval. The flaming tower embodies a moment of reckoning for an order built on false pretenses. It represents a revolutionary moment that clears the way for something new to rise from the ashes of the old. It is conflict embodied. It is something we should all embrace. For the problem isn’t the existence of conflict, but our inability to process it in a healthy and constructive way. Moving through conflict together is what builds trust. It’s what builds communities. On the other side of conflict is connection, commitment, and courage. I’m going to keep fighting because it’s what I believe we need right now. We need to make space. But know that I hope to live to see the day where the need for destruction has passed, where the oppressive systems which keep us down and divided have been dismantled, where we have space to create new worlds. I hope you’re standing next to me. I hope to imagine fantastical utopias and see them as possibilities. I hope to read fiction.