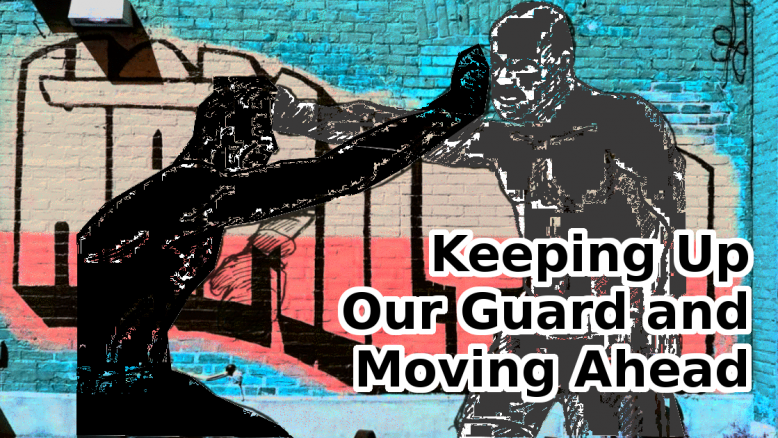 With The Tower about to reopen at its new location, it seems like a good moment to take stock of our situation. The weight of repression in Hamilton has not gotten any lighter, but we have gotten more used to and maybe even more skilled at carrying it. That said, it’s too soon to say the storm has passed and we face challenging times ahead. As we navigate these next days, weeks, and months, there are a couple of things worth keeping in mind to help us all stay safe.

1. Don’t Talk to The Police

The police have still been sniffing around, trying to approach people they believe to be connected to anarchist projects in the city, showing up at homes and workplaces. While it is common for police to claim that it is in your best interest to talk them, this couldn’t be further from the truth. Whether they’re friendly or threatening, remember that you have nothing to gain by talking with them at all. They will likely lie or exaggerate and attempt to manipulate you. You can be polite or not, but it’s best to just say that you aren’t interested in talking with them. If they continue to ask questions, you can just reply: “I have nothing to say”. If they threaten to take you to the police station or ask you to go there, you do not have to go with them unless you are under arrest. You can ask, “I’m not interested in meeting with you, am I free to go?” If they say yes, great, close the door and/or get out of there. If they say no, ask if you are under arrest. If you are arrested, you can insist to talk to a lawyer and will be referred to duty council if you don’t have someone in mind. Once arrested, you are required to give your name, birthdate, and address, and that’s all. At this point, being polite to the cops is out the window – just keep your mouth shut, you don’t have to answer or acknowledge them, and it’s easier to never start talking than it is to realize you’re about to go too far and need to stop. The phrase, “I’m not answering any questions” is a good friend in those times.

2. Be Weary of Rumours, The Devil Really is in the Details

Although there are few details yet, there is an informant of some kind in this case. Beyond that, not much is known, so if you’re hearing more than that, be cautious because rumours move quickly in times like these. Work is being done around this and more details will be announced when they are available. Until then, be smart and keep in mind basic security culture principles and practices, but be careful of jumping to any conclusions, making any accusations, or fueling any public speculation. Paranoia is debilitating, spreads tension, and breeds conflict. Suspicion can be counterproductive and make our spaces unwelcoming to anyone outside of our immediate networks, and false accusations can push good people away. Turning on each other, isolating our projects, and/or closing ourselves off weakens rather than strengthens us. As soon as we have more information about the informant we will make sure that it is widely spread.

3. Don’t Give Into the Hype, Work Through the Fear

House raids, arrests, media stunts, and police visits are scary — they’re meant to intimidate. State repression is intended not only to publicly penalize some, but to scare others into submission and tear movements apart. That’s why it’s important to keep things in perspective and not give in to the hype, to talk about the situation with people you trust, and prepare for it without letting fear take over. The forces we’re up against are powerful, but they are not everywhere and they are not omnipotent. Staying solid is most important when it’s under pressure and we all depend on each other to hold the line against the cops, the far-right, and the rich, while also keeping our priorities clearly in sight. These charges are aimed at individuals who openly and persistently advocate for ideas that run counter to the powerful in this society, arguing against the ability of capitalists to control our basic needs, against the politicians and the visions they impose, against misogynists and racists and the hierarchical nightmare world they represent. Those charged are dealing with this situation with a courage that makes it a little easier for the rest of us to stand up too.

4. Be Defiant, Continue to Struggle and Define the Terms

The justice system and its accomplices want to portray anarchists as criminals, to rob the struggles we engage in of their substance and context, and reduce them to certain acts that they choose to consider crimes. For myself, I am no more interested in being innocent than guilty; those who are charged and those who aren’t all participate in a shared struggle against authority and against the rich and their world. Our best defense now is to continue those struggles on our own terms and to refuse to let them be defined by the courts or the media. Charges, conditions, and police threats might make this harder, but our ideas and projects are no different than they were before these attacks by the powerful.

Support from anarchists and other radicals both within Hamilton and beyond has been very important and will definitely continue to be. One great way to show solidarity over the next little while is to help the new Tower space thrive. Do you live out of town? Consider coming to give a talk on what’s happening in your town, a movement or situation you’re interested in, or a favourite text, or bring a film and some discussion questions. Don’t like being the centre of attention? Just come out to events at the space. Meeting people and participating in discussions is a powerful way of pushing back against the fear and isolation the state seeks to spread.

A previous update encouraged people to invite their friends together to discuss repression and gentrification, using a collection of texts about Locke St and its aftermath as a starting point. Taking steps to clarify our perspective on the situation is important: if you organize a discussion in your town, consider posting it publicly (and anonymously) on North Shore Counter-Info.

-An anarchist in Hamilton