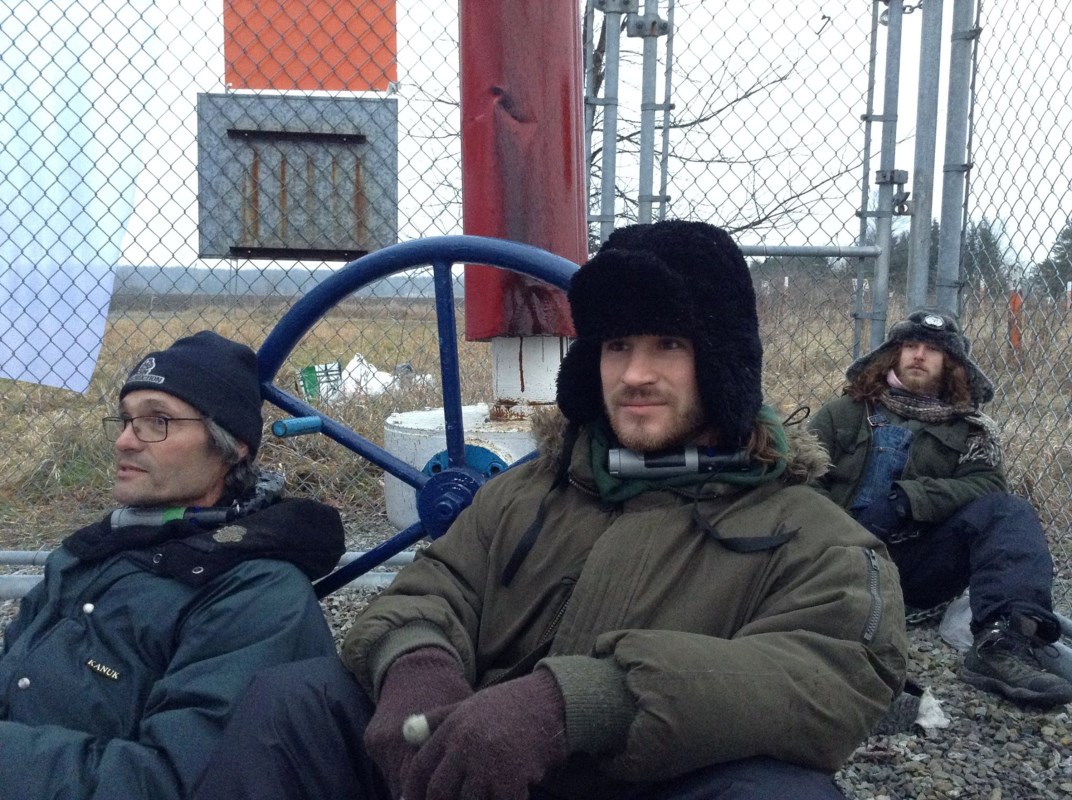 Anonymous submission to MTL Counter-info. Link to fundraiser at bottom.

On December 18th, 2017, two anarchist comrades were sentenced for their role in a 2015 direct action in which a Enbridge’s Line 9 was physically shut down. Their affinity group accomplished this by physically closing a manual valve, thus proving that it was possible to safely shut down pipelines. This action, the first of its kind, inspired a wave of similar actions, including one in which 5 pipelines in 4 different states were shut down simultaneously.

At the sentencing of Fred and Will, the judge found it suiting to give the defendants a lecture. “You were convinced”, he said, “that it was correct”. He went on to compare the activists action, in which no physical entity was harmed, with terrorist attacks such as Boston Marathon bombing and the Bataclan massacre in Paris. The commonality between these actions was the fact that they were all ideologically motivated. The judge went on to reference a man in Germany in the 1930s who believed that he had a righteous cause.

Well, two can play at this game. If the condemnation that follows seems overly scathing, keep in mind that this fucking judge compared our comrade to Adolf fucking Hilter.

This judge is a representative of the very same Crown that has been responsible for atrocities much worse than the Boston Marathon bombing or the acts of the Bataclan shooters. The genocidal residential school system was presided over by many judges, and the human cost of this system was much greater than the terrorist acts the judge cites. How dare you chastise our comrades, as if they were errant children, for disobeying your Law, when much greater atrocities have been committed by people using the Law as their weapon? It is your moral code, not ours, which is ill-conceived and naive.

You are old, and will not live to see the full extent of the coming cataclysm wrought by climate change and the economic and political crises it will precipitate. For those of us who must live with the consequences of your generations failure to address the ecological crisis, we cannot tolerate the rape of Mother Earth that Enbridge and their malignant ilk daily engage in. How dare you scold us for taking action in defence of our future? It is our future that state-sanctioned ecocide has been systemically impoverishing for centuries. Would you chastise us for desiring to pass along a liveable world to those who come after us? Would you rather that we wallow hopelessly and helplessly, watching the web of life upon which our survival depends deteriorate further and further? The political channels you would have us believe in have clearly proven their inability to address the planetary crisis. Would you rather that we shrug and say “Fuck it”? Or waste our lives pursuing state-sanctioned “solutions” that are sure to fail? How dare you claim the moral high ground, you who lives in luxury while the sixth mass extinction rapidly accelerates? What have you done to reverse the damage that this civilization, year after year, inflicts on the Earth?

Fuck you, you old fuck. We are trying to repair the damage that your generation has done. We are trying to staunch the world’s wounds before it is too late. How dare you reproach us for our actions? In your inane lecture, you compared Frederick Brabant to Hitler, for the reason that they both believed in a cause. It insults my intelligence to even dignify this with a response, but since I must stoop to your level, here goes: The election of Hitler was legal, the actions of those who protected Jews and other undesirables from the Holocaust was illegal. The actions of slave-owners whipping slaves was legal, the Underground Railroad was outlaw shit. The residential school system was legal, traditional indigenous ceremonies were forbidden. It is an idiotic abasement of the human faculty for reasoning to equate lawful with right, and unlawful with wrong. The law, in every country, is created by the ruling class of that country, according to the interests and inclinations of that class. That you cannot see this obvious fact demonstrates a poverty of imagination that you should be ashamed to display in public. What you are saying is, in effect, Might makes Right, and in doing so you place yourself in the spiritual company of the judges of countless oppressive regimes, who have legitimized terror and torture by upholding the Law. So I say unto you: in condemning our comrades, you were convinced that you were right, but so was the judge that condemned the Tsilqotin chiefs to death. Or the state toadies who ordered the eviction of Africville and the deportation of the Acadians. Or they who enacted the War Measures Act during the October Crisis. Or they who demanded that Chinese migrant workers pay a head tax or be deported. Or they who ordered that people of Japanese descent be interned in concentration camps during World War Two. Each of these men, we can suppose, believed that what he was doing was right. But this was not the case.

We believe that there will come a day when the actions of water protectors will be seen in the same light as those who fought against slavery and imperial conquest in earlier generations. Moreover, although we are grateful that our activism has enjoyed popular support, we do not need the approval of mainstream society. We acknowledge no authority higher than ourselves, and we will continue to act in accordance with the aspirations of our spirits for freedom and dignity. We will continue to fight in defense of Mother Earth, on behalf of future generations and all our relations, consequences be damned.

And make no mistake – our movement is growing. Those with their fingers on the pulse already know this – the rest of you will soon enough.

May the sun set on all you represent, and as your generation dies, may the asinine ideology you have so shamelessly espoused die along with you. Fuck you, fuck your court, fuck the Crown and the Queen you serve. May the day soon come where all belief in their sanctity fades from memory, and human beings once again honour what is living instead of your dead abstractions. Only then will we as a people to be able to speak meaningfully of justice.

In the name of our fallen comrade, the praiseworthy and beloved Jean Leger, we declare: ON LACHE RIEN – we are not giving up.

the Pukulatamuj brigade of the Imaginary Anarchist Federation

Our comrades are currently fundraising to pay for costs related to this case. Please visit their crowd-funding page, found here: