Politicians, cops, capitalists and bootlickers across the territories of so-called Canada are celebrating the genocidal legacy of colonial civilization with a year full of grotesque spectacles. Canada tries to whitewash 150 years of colonial violence with fighter jets adorned with the colors of the Canadian flag, concerts and parades, and VIA Rail commuter train advertising.

We see nothing to celebrate about the genocidal campaign waged against indigenous peoples, ecological devastation, or the establishment of a State which represses our wild desires and steals our capacity to live free. Instead, we celebrate the resistance of indigenous peoples across Turtle Island; from the Gitwilgyoots peoples resisting the construction of a massive LFG (liquified fracked gas) terminal on their territories, to the Mi’kmaq resistance to fracking on their territories.

Earlier this morning, we defaced the Canada 150 propaganda on the side of the VIA Rail train headed from Tio’Tia:Ke (“Montreal”) to Gichi Kiiwenging (“Toronto”). We wanted to celebrate an anti-colonial July 1st a little early, because colonialism isn’t reserved to a few days on the calendar. This is the same railway that was blockaded in solidarity with Standing Rock last November.

Canada’s rail infrastructure played an integral role in the establishment of this settler society built on dead native and immigrant bodies – colonial expansion was contingent upon building these train lines for the transportation of troops and the transformation of “natural resources” into commodities for human exploitation.

This infrastructure continues to play an integral role in the maintenance of the capitalist economy in the territory dominated by the Canadian State. During the Oka uprising, there were widespread solidarity actions throughout the territory of so-called Canada: road and railway blockades, and sabotage of railway bridges and electrical transmission lines. This solidarity was a tangible threat to the Canadian economy and its politicians who tried to crush this indigenous insurgency.

We covered the train in green and black – the colours of an anarchism that is against civilization and domestication. We are settler anarchists who are inspired by indigenous struggles that assert their autonomy by any means necessary, and in the coming times of resistance to pipelines and territorial incursion, we hope that our solidarity will feel significant and impactful. We share a goal with many indigenous struggles of weakening the Canadian State’s power, and want to destroy it completely. If we want to be able to choose how we live, create the social relations we desire, and be free from cops, bosses, politicians and all authority, we see the only option as the destruction of the State, capitalism, and civilization.

Fuck Canada! Solidarity with all those who resist and revolt!

P.S. We used fire-extinguishers filled with paint. If you’re interested in trying them out for yourself, watch this instructional video. 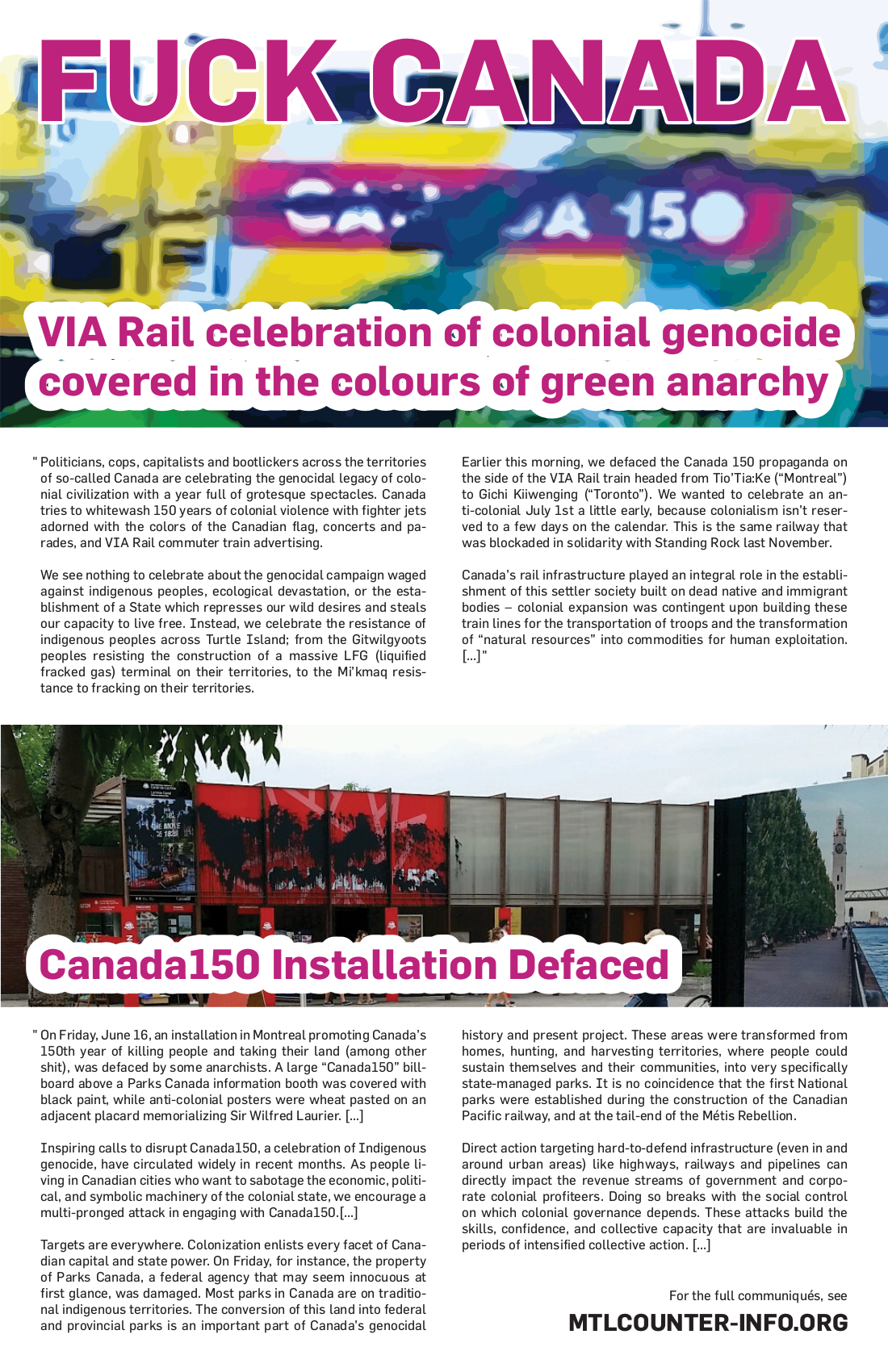