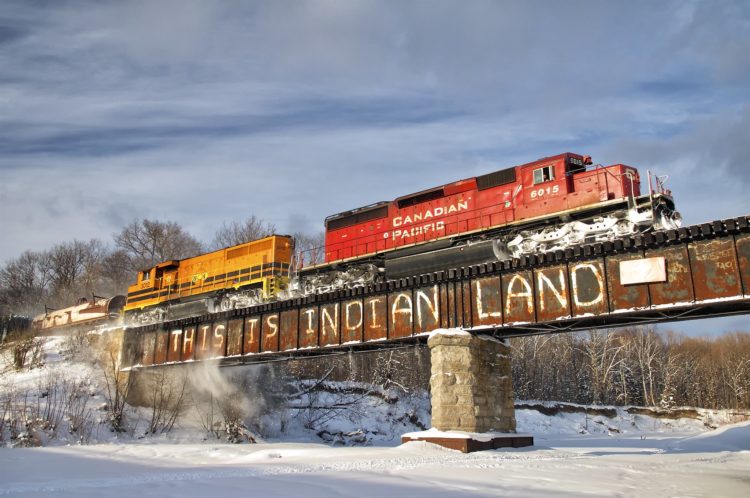 CN’s rail network has been paralyzed for more than a week by blockades in solidarity with the Wet’suwet’en community, who opposes the construction of the Coastal GasLink pipeline on their unceded territory. The Mohawk community of Tyendinaga has been blocking passenger and freight train traffic between Toronto and Montreal since February 5, and a railway blockade in New Hazelton, B.C. has forced the closure of the Port of Prince Rupert. Blockades in solidarity with the Wet’suwet’en have since multiplied across so-called Canada as camps have been set up on the tracks at Kahnawà:ke, Listuguj, Magnetawan, and Diamond, among others.
On Thursday, CN announced the closure of its Eastern Canadian Network and the entire Via Rail passenger network, causing million-dollar losses to companies dependent on freight transportation of goods. Shortages are anticipated nationwide in several regions and international grain exports are further delayed. While the president of the Canadian Chamber of Commerce says that a rail gridlock of this magnitude represents an emergency for the Canadian economy, the Prime Minister is calling on protesters to “respect Canadian law” as threats of court injunctions pile up.

The economic and political impact of these blockades affront the central role of extractivism and rail infrastructure in the Canadian economy, but they also highlight the deep, structural relationship between freight transportation and Canadian colonialism. Strikingly topical, the history of the development of the railway network illustrates how industrialization, the unification of the Canadian nation, Canadian law, colonialism and state violence are intertwined.

Railways at the Heart of the Canadian Constitution

Much more than a mere economic tool, the railway system was at the heart of Canadian Confederation and played a key role in Canadian nationalism. The construction of the Intercolonial Railway, linking United Canada to the Maritime provinces, was made a condition of the signing of the Constitution Act of 1867. British Columbia then joined Confederation in 1871, following Prime Minister John A. McDonald’s promise to build the Canadian Pacific Railway (CPR) that would link eastern and western provinces. The Canadian Pacific Railway project became a major actor in the unification of Canada, both symbolically and materially. The government opted for a route that avoided crossing the American border and the territories belonging to the Hudson Bay Company, which until then had been mostly inhabited by First Nations and Métis communities. Widely subsidized, the construction of the CPR was marred by corruption scandals that ousted McDonald’s government in 1873.

Parallel to the CPR, a multitude of railways with less ambitious routes were built, once again subsidized by the government and raiding First Nations territories. Few of these speculation projects were actually profitable and many were on the verge of bankruptcy following the First World War. Several lines were bought and subsequently nationalized by the government, and then merged to create the Canadian National Railway (CNR).

The Indian Act and the North-West-Mounted-Police

The passage of the Indian Act in 1876 provided the legal framework for treaties that would allow the Canadian government to privatize and appropriate Indigenous lands crossed by the railways. The Band Council system and the reserve system enshrined in the Indian Act imposed a political structure and a concept of land ownership that was at odds with First Nations traditions and cultures, and allowed the government to dictate the terms of expropriation negotiations in a “legal” manner.

In 1873, the predecessor of the Royal Canadian Mounted Police (RCMP) – the North-West-Mounted-Police – was created for the specific purpose of controlling the Indigenous populations of the Prairies. Beginning in 1881, the Mounties were assigned to protect the construction of the Canadian Pacific Railway and moved their base to Regina, newly founded in preparation for the construction of the railway. Rail transportation was a major asset for the Mounted Police, allowing them to quickly mobilize recruits to deal with Métis uprisings and enforce the Indian Act.

Following the intentional extermination of the buffalo herds by settlers between 1870 and 1880, the survival of several prairie First Nations depended on the food supplies provided by the Mounted Police. The threat of famine forced them to sign treaties surrendering their territories to the Crown and assigning them to reserves north of the railway lines. Between 1871 and 1921, the Canadian Crown signed 11 treaties with the First Nations that ceded virtually all of the land from “Ontario” to the Rocky Mountains.

The Continuation of Canadian Colonialism: From Railways to Pipelines

The similarities between the history of railway construction and the various pipeline projects are more than coincidental. Government subsidies, buyouts of failing projects, theft of First Nations land, legal actions and intervention by armed forces: what emerges from the history of railways in the second half of the 19th century is the current persistence of the structural colonialism on which Canada was built. The appropriation of First Nations lands is at the heart of the Canadian Constitution and Law. Beyond the rhetoric of reconciliation, colonialism continues at the same pace and is still maintained today through legislation and brut force. Canada was built on exctractivism and the circulation of goods. The train blockades of the past week highlight not only the colonialist foundations of Canadian territory, but also its weaknesses, its dependence on its transportation infrastructure and the efficiency with which it can be shut down.

ALL EYES ON WET’SUWET’EN

Interactive map of blockages in support of Wet’suwet’en