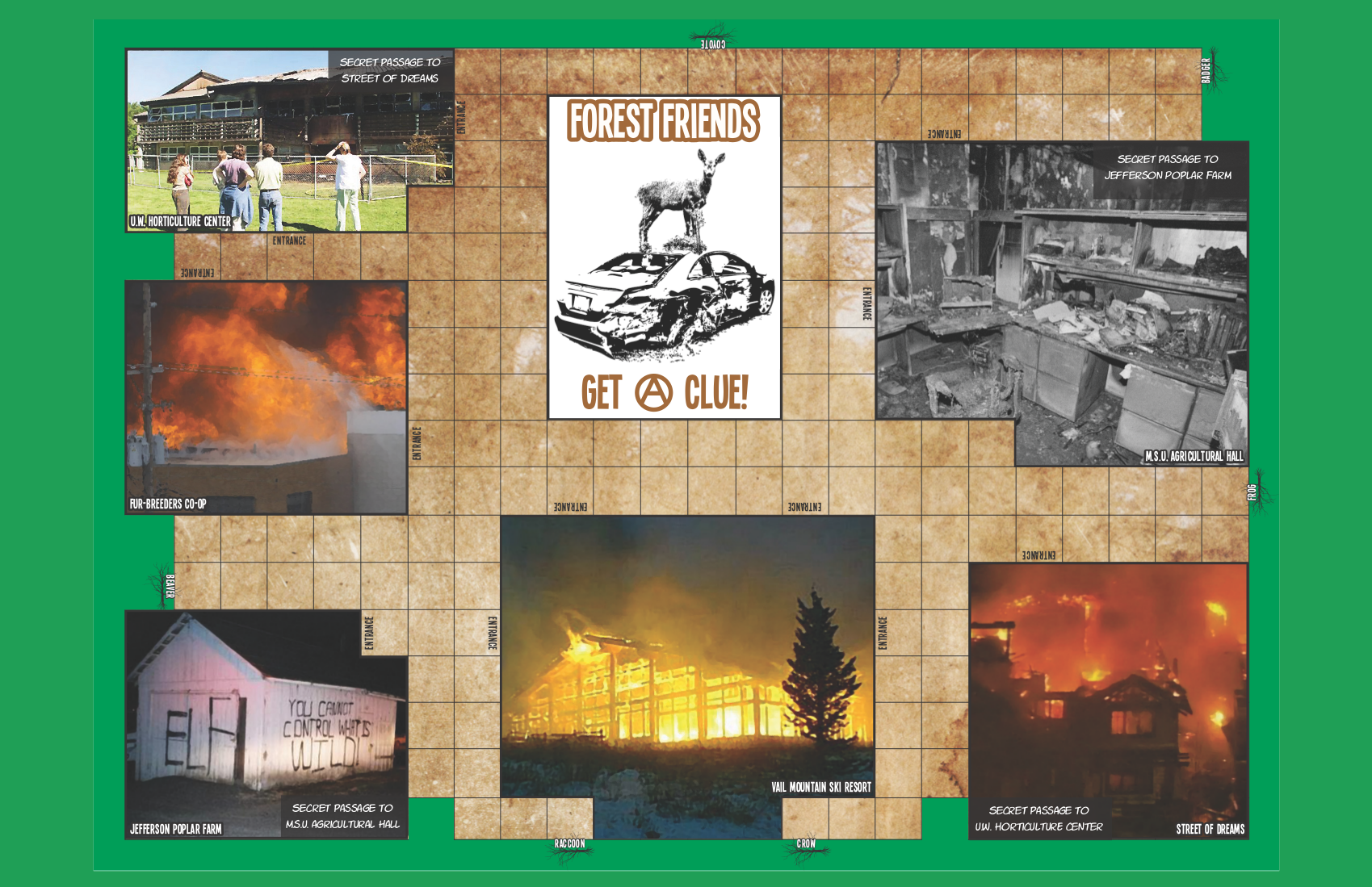 June 11th, International Day of Solidarity with Marius Mason & All Long-Term Anarchist Prisoners, is less than a month away. Montreal will be participating by having a board-game night featuring an Earth Liberation Front edition of Clue! (June 11, La Deferle, 7 pm – check here for more info soon)

Forest Friends: Get (A) Clue! is a game where players try to figure out the three main facts of an attack against Industrial Civilization: the attacker (animal), the location of the attack, and the weapon used in the attack. We do this so that the animal can be celebrated by all of their fellow forest friends (because there are no forest cops who want to imprison these comrades for their brave actions in this imaginary world).

Rather than the library, you’ve got Vail Mountain Ski Resort. Rather than the dagger, you’ve got gasoline and matches. We’ve made the game printable in case other cities want to host similar events, or you just want another way to teach kids this important history.

Vail Mountain Ski Resort
On October 19th 1998 members of the ELF set fire to five buildings and four chairlifts at the Vail Mountain Ski Resort. Resulting in property damages of over 12 million dollars, a communique states that the members committed the arson on behalf of the Lynx, whose habitat would be destroyed by the expansion of the resort.

Jefferson Poplar Farm
On May 21st 2001 members of the ELF set fire to two buildings and thirteen vehicles at the Jefferson Poplar Farm in Clatskanie Oregon, a tree farm which specialized in “fast growing” trees that harmed biologically diverse ecosystems. Damage was estimated at around half a million dollars. Graffiti left on the scene read “You Cannot Control What Is Wild!”

Street of Dreams
On March 3rd 2008 unknown members of the ELF set fire to four multimillion dollar houses in Woodinville Washington, causing about 7 million dollars worth of damage. A note left on the scene read “Built Green? Nope black!” and “McMansions in RCD (Rural Cluster Developments) r (are) not green.” The note was signed “ELF”.

Michigan State University Agricultural Hall
On December 31st 1999 members of the ELF doused the offices in the Agricultural Hall with gasoline and set them ablaze. This arson caused about one million dollars worth of damage. This target was chosen because of the research efforts of scientists working to replace natural crop plants with GMO’s in the poorest nations in Asia, Latin America, and Africa.