Earlier today, at 6 pm, a few friends attacked an SPVM cruiser parked outside of Charlevoix metro in the Montreal neighborhood of Pointe-Saint-Charles by slashing the tires and breaking the windows.

We want to use this attack as a call for actions against police in Montreal between now and the end of March.

As the annual demonstration against “police brutality” approaches, we’d like to move away from only being combative with police during an annual demonstration, for which they can prepare extensively and after which social peace is easily restored. We want to show that the police are vulnerable to sabotage, and that this is possible every day of the year. We want fear to change camps. We want to encourage the anarchist space in Montreal to experiment with a diffuse offensive against the daily operations of police, not just on march 15th, but in the entire coming month.

We scattered copies of this flyer at the site of the smashed cruiser:

Why we attack the police

If you’re reading this, you’re probably wondering why a few masked individuals just smashed the police car in front of you.

It was pretty easy to ruin these cops’ day; we wore scarves, hats, and gloves to conceal our identities, and dedicated twenty seconds to our direct action while one of us was well positioned to watch for police trying to return to their vehicle. We ran a block, changed our outer layer to appear different while keeping our scarves on, and calmly blended back into the crowd as we walked away.

Allow us to introduce ourselves; we are those who never felt content to follow the program of metro-boulot-dodo that schools prepare us for; we are those who see a cop and recognize the legacy of domination they represent and enforce; we are those who want to struggle to destroy the state, the economy, the apparatuses which force us to conform to the predetermined roles of ‘woman’ and ‘man’, and all the innumerable daily violences this society imposes on us. We want to destroy what destroys us, while simultaneously beginning to create a world less miserable than this one.

We’re not fooled by the reforms the state offers us to placate these sentiments, because we also recognize that we can’t just adjust the dials on this death-machine of a society, but must set fire to its electrical board. We want a revolutionary rupture with the daily life that forces us into work and acceptable social relations. Outside of large-scale riots and rebellions, we live this desire for something new by sabotaging the systems of domination in whichever ways we can.

Many of us call ourselves anarchists, though what’s important isn’t what we call ourselves, but rather the rich and inspiring struggle against authority that our actions and projects contribute to. For us, a police cruiser that can no longer patrol the neighborhood hints at the bigger goal of making the system of policing, prisons, and courts non-functional, because this system of repression and control has never and will never be anything but an obstacle to our freedom. It protects and serves the powerful – institutions and people who have more of a say in how we live our lives than we do.

We hope that the sound of those shattering police car windows resonates with you, and that you’re also disgusted by any obedient citizens who understands this as an attack on their own safety. Time and time again, we see that police only worsen our lives. When there’s a rapist in our neighborhood, we’d far rather see a self-organized group of people respond with baseball bats to the rapists kneecaps, rather than see someone who survived rape be dragged through the courts and made to feel shamed at every turn. We’d far rather the people in our neighborhood who are kept in poverty by bosses and landlords organize to loot the IGA or hold up a yuppie business, rather than steal from and call the police on each other.

Every year on March 15, there is a protest against “police brutality”. If we want a chance at free lives, we need to bring the fight beyond just the “brutality” or “excesses” of the SPVM. We need to understand that brutal violence and coercion are intrinsic to the police’s very existence. We refuse the narrative that the media and the state feed us – that the problem is individual police and not the entire structure of policing and the world they defend. That’s why when many of us meet in the streets, it’s against all police, and we bring rocks and fireworks to lob at them from behind barricades. We invite you to find us there, and share in this practice of revolt.

Until next time
Your friendly neighborhood anarchists 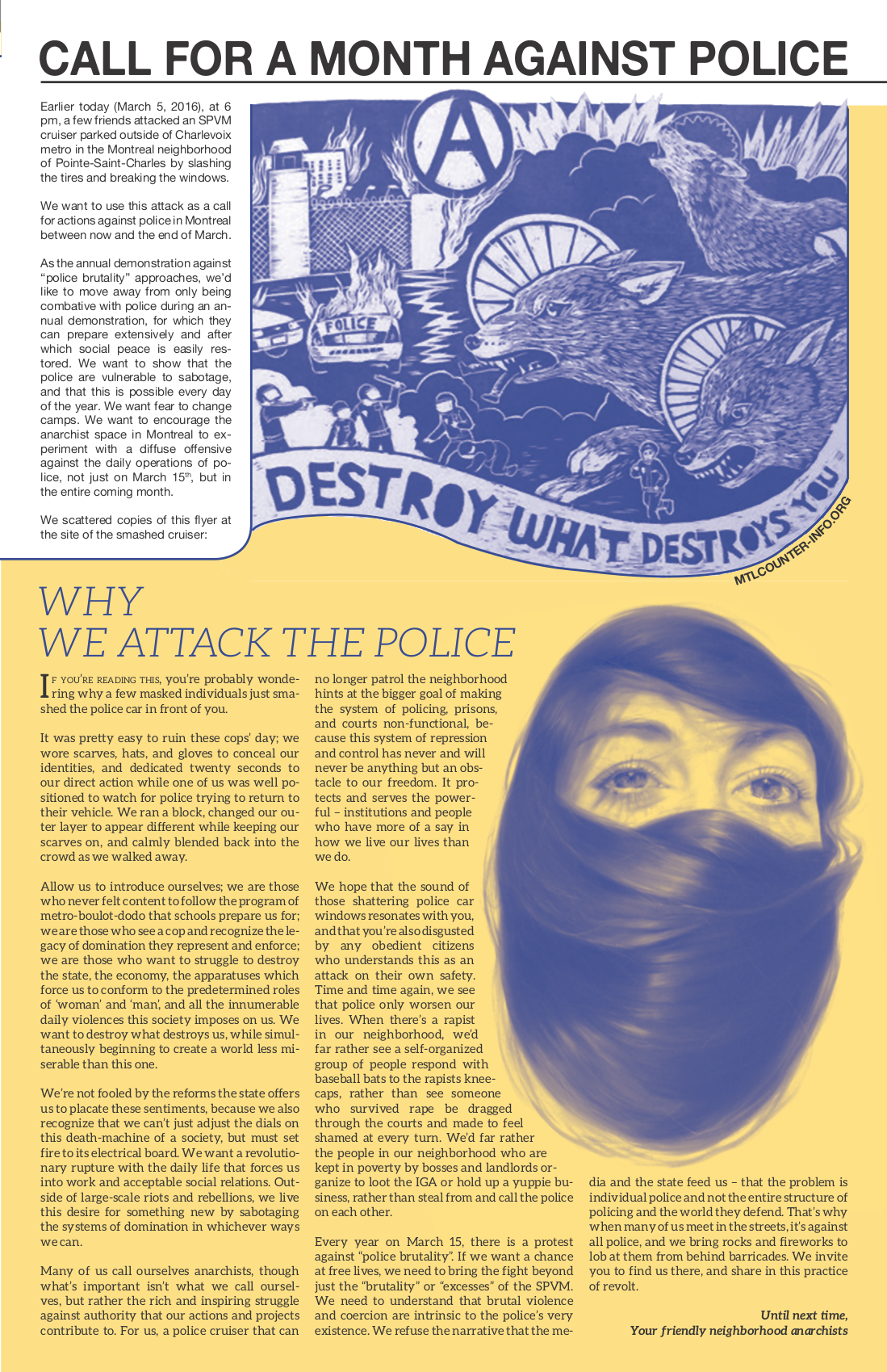