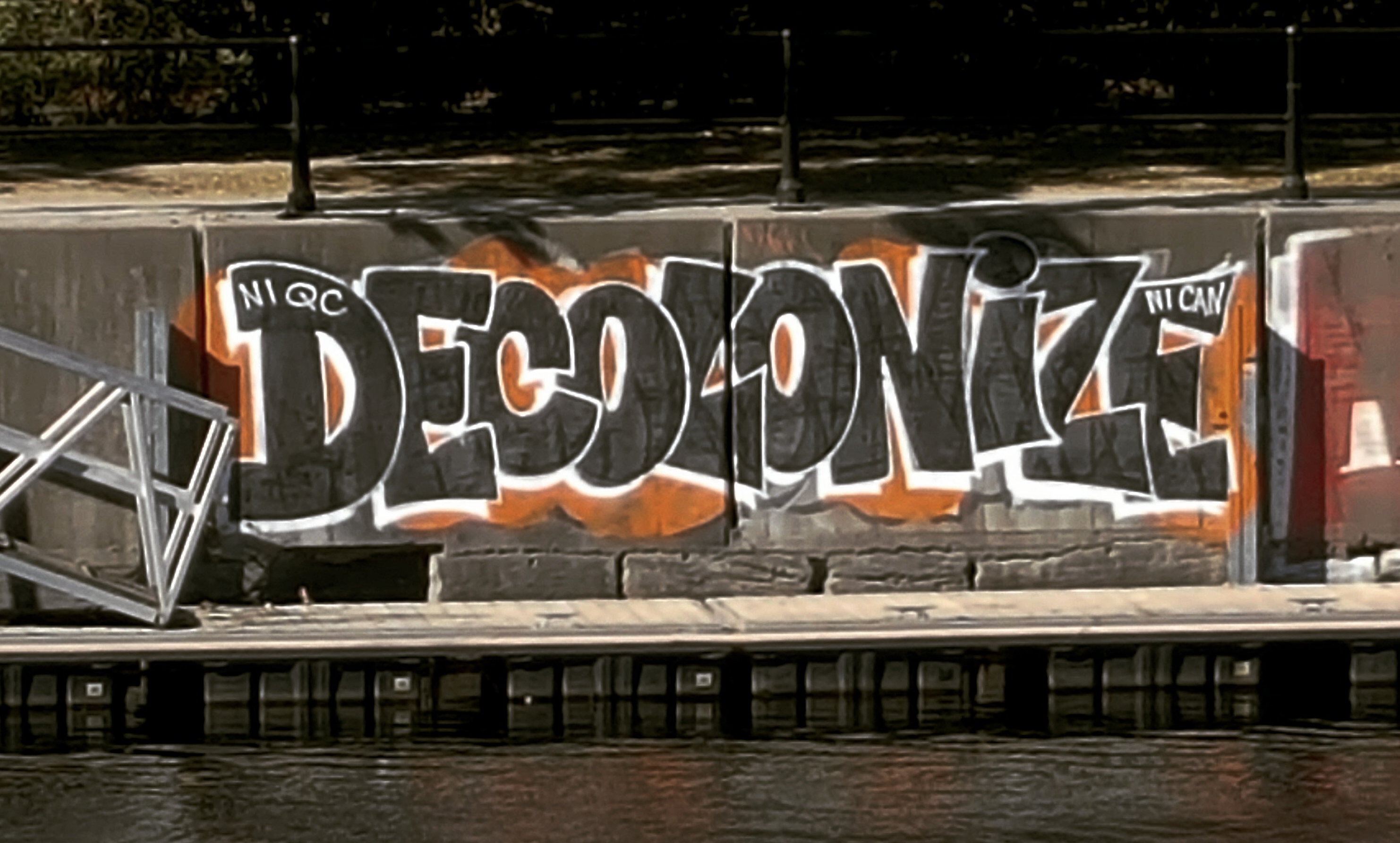 Following Saturday’s “Open The Borders” demo at the Lacolle Border, the message “DECOLONIZE” appeared along a canal wall in an affluent southwest Montreal neighborhood. This piece provides an opportunity to explicitly outline some links between the ongoing struggle of decolonization across Turtle Island and anti-fascist action. In Fascism & Anti-Fascism: A Decolonial Perspective, Kesīqnaeh makes some insightful links to these struggles while questioning the significance of fascism to Indigenous peoples already combatting colonial violence. For the sake of brevity, a few direct quotations are provided below:

“Fascism is when the violence that the imperialist nations have visited upon the world over the course of the development of the modern, parasitic capitalist world-system comes back home to visit.”
[…]
“In the settler colonial context this violence is one that was perfected within the exceptional state of the expansion of the frontier, the clearing and civilizing of Indigenous People to make the land ripe for settlement, and the carceral continuum that has marked Black existence on this land from chattel slavery to the hyperghetto.”
[…]
“To quote the African People’s Socialist Party, ‘our liberation—and that’s what we must win—will only come about by an all-out struggle to overturn the colonial relationship we have with white power’”. [1. African People’s Socialist Party. 2015. “Colonialism Trumps Fascism in U.S. Elections.” The Burning Spear, September 8.]
[…]
“The principal threat then of fascism to colonized peoples is not one that we would move from a state of having not been subjected to violence from every angle to one where we would face that, but rather that the pacing [of] the eliminative and accumulative logics of settler colonialism would be accelerated.”

Contray to the optics of “good citizen/ good patriot” that right-wing Quebec groups construct in the news and social media–for example, throwing up peace signs or copying an anti-fascist demo chant, “toute le monde deteste les racistes”– they are racist, chauvinistic, anti-migrant and ultra-nationalist. These groups’ hierarchal organizational structures, their leaders and members disguise white supremacist values as outrage for the Trudeau government. But, if it’s the liberals they’re after, why mobilize at the Lacolle border? Their inconsistent messaging betrays their true beliefs. We need to pay attention to how they construct their messages (what, how, when they say something, in relation to what other ideas, and the contexts that these messages are communicated in). It’s not only worthwhile to pick apart the extreme right’s arguments to see the ill-informed and porous political analysis they subscribe too, but also, to think deeply about what is assumed and implied because of these views.

“They all thirst for a new frontier, for recolonization, for territories, for a white homeland. In other words, they thirst for the fulfilment of the settler dream…”(Kesīqnaeh, 2017).

Far away as Montreal’s canal walls might seem from this discussion, there are real connections to be made here. “DECOLONIZE” is a piece done by folks involved in anti-fascist organizing and action. Kesīqnaeh states, “if you want to fight fascism, you have to decolonize.” The people behind the canal’s message want this political analysis to be on everyone’s mind who takes up this struggle against far-right groups across Turtle Island.

“DECOLONIZE” performs aesthetically to disrupt the infrastructures that invisibilize the violent colonial processes that have made it possible for condo developments and affluent entrepreneurial shops to emerge while bringing with them residents and patrons who have little regard for the violent structural arrangements they belong to. These infrastructures organize society according to white supremacist aspirations that deploy anti-Indigenous and anti-Black narratives. While fascism may not necessarily appeal to the white wealthy elite, it’s ideological values sustain the privilege and impunity of those who compete for power in this current socio-political and economic climate. These right-wing groups view the state, it’s policing authorities (yup, they clapped when the riot police showed up at Lacolle), and it’s borders as a kind of legitimate power. However, borders are an apparatus of a settler colonial state founded on stolen land, slavery and genocidal politics. This makes borders illegitimate and this is a call to comrades to take action accordingly.