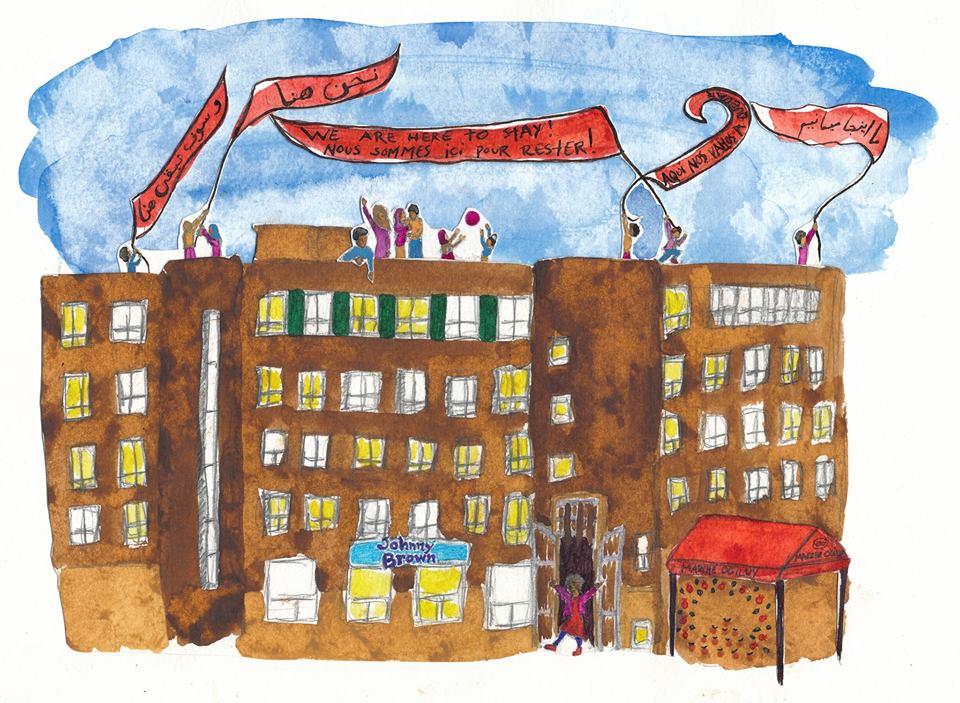 On March 13, we went to the Villeray-St-Michel-Parc-Extension borough council meeting in order to prevent the elected officials of the borough from granting Ron Basal a permit to continue the development of his luxury apartment project in Plaza Hutchison. After the council refused to consider the appeal of residents in Villeray who opposed the Taxi Diamond condo project, we decided to disrupt the meeting, so that Ron Basal would not receive his permit. We were brutally forced out of the room by the police, and two people were arrested and charged. The borough council then approved the permit for the Plaza Hutchison construction, in an empty room, with Basal sitting in the front row.

We have pursued all of the available administrative and political channels, but those have only led us to an impasse. It is time now to take to the streets, instead of trying to work with a system we don’t believe in. If the mayors find this messy, that is too bad for them. We are disgusted, but not surprised by the lack of initiative, openness, and lack of political will demonstrated by borough mayor Fumagalli. Fumagalli has demonstrated that she won’t dare to take even the slightest risk in denying a simple permit, even when facing an issue with such grave consequences for the community. Writing a communique to say that she opposes the project, despite having voted for approving the permit, is an insult for the tenants of the building who have been evicted, as well as to the residents of the neighbourhood. She accuses us of making the council meeting unsafe, but the only weapons we had to oppose the police batons were toy trumpets and noisemakers. The two people arrested, brutally forced to the ground and handcuffed for having tried to make their voices heard would have also liked to feel safe.

We also reject Valérie Plante’s proposal to invest 17 million dollars in projects to promote “social mixity” in Parc-Extension. Social mixity does not benefit everybody; it’s just a polite term to make gentrification easier to swallow. In fact, such projects only result in the allocation of public funds to build housing for the wealthy- and actually furthers the process of gentrification by introducing them to “newly discovered” and “exotic” neighborhoods. We refuse to support the displacement of working class people of colour from our neighbourhood for the benefit of a new wave of richer and whiter inhabitants.

If the mayor and the councillors have thrown in the towel on this project, we cannot. We cannot abandon the struggle to preserve a community space that has been the heart of our community for decades. We will not allow gentrification in our neighbourhood. Together, we will continue the struggle!