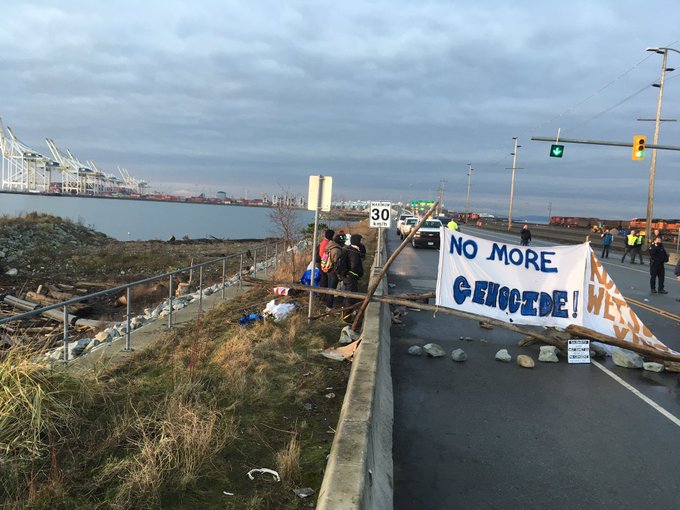 Currently people are shutting down Canada, ports, rails, highways, hell the hashtag’s even trending on twitter. As anarchists we are seeing large parts of the population engage with anti-colonial and anti-capitalist movements. This engagement as our own has been in the past is tricky, and requires critical reflection.

The stench of liberalism spreads far and wide, and although many are sympathetic with Wet’suwet’en demands, confrontational tactics as expected leave many shaking at their feet. In Vancouver we have seen large symbolic arrests prioritized over effective action. Not to say there has not been effective action, people held the entrances to major ports shutting down commercial traffic for days. We should celebrate this. But when facing arrest rather than moving to say the rails or the highways they chose to wait and be arrested symbolically (subsequently released without charges).

In contrast to this a more confrontational solidarity demo happened before the raid with much heavier legal consequences for its participants. This event did not seek to climax with arrest, instead the objective was economic disruption. Currently we cannot discuss this because of charges faced by alleged participants – stay tuned.

Reflecting on the two events – some questions come to mind, why the fuck are activists so reactive? Beginning the blockades of the port before the invasion of Wet’suwet’en territory would have been incredibly advantageous from a tactical perspective. We need to move to preemptive stance. Simultaneously there would have been no “social license” no buy in from the population at large which was maybe necessary for occupations to occur without being willing to take more militant stances to defend themselves.

What does this mean for us as anarchists, are we left to simply wait for buy in from others for action? FUCK NO, we call for uncompromising desire for attack and solidarity.

Seeing these dynamics and reflecting on our own desires for continual conflict with the state, its police forces and capitalist forces at large we produced a poster and flyer to be distributed. This work was heavily inspired by Southern Wind Woman’s Autonomously and with Conviction, an amazing revolutionary text.