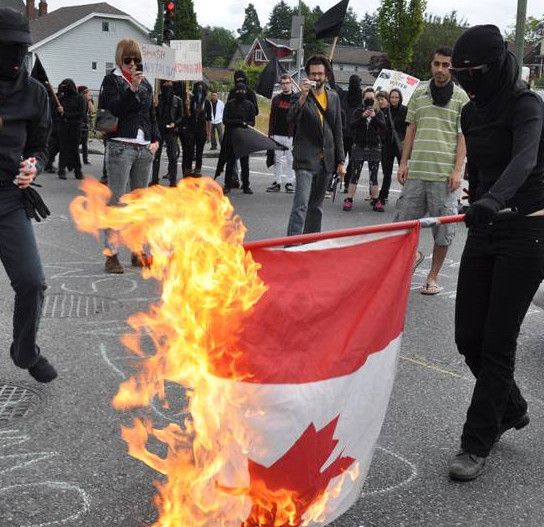 We’re reaching out to allied groups and individuals all over so-called “Canada” because we want to organize an anti-colonial Anti-Canada day on July 1st in Montreal. We’d like to propose you do the same in your city, to have demonstrations, events, disruptions and anti-colonial actions all across Canada.

As you might know, this year is the 150th anniversary of Canada. The government will spend half a billion dollars in 2017 to organize ceremonies, parades and parties to celebrate the colonialism, imperialism and racism so characteristic to nation-states. Those amounts will be invested in questionable projects that will benefit the tourism industry, rather than local residents.

We should never forget that the territory we call “Canada” has been stolen by European settlers from the Indigenous peoples who have lived here for thousands of years. The land was taken in order to appropriate natural resources to make the English and French crown richer. Why should we celebrate that?

Canadian colonialism isn’t something of the past, as the oppression and racism against Indigenous people still exists, whether we think about the disproportionate rate of incarceration compared to white people, to the police abuse they face, or the military interventions (Restigouche, 1981, Oka, 1990, Gustafsen Lake, 1995, Elsipogtog, 2013). These interventions were meant to “discipline” Indigenous communities while they claimed rights that the Canadian government agreed to in treaties. Even then, these treaties were signed after settlers invaded Indigenous territories and destabilized the ecosystems their communities depended on. Once again, is there anything to celebrate?

Even if the vast majority of the Canadian population comes from immigration, beginning with the 16th century period of colonization, the Canadian governments maintain a racist attitude toward new migrants. They are marginalized, deprived of essential services they need to live in dignity, and are often treated like criminals or terrorists. Should we be proud of the welcome we offer to the people that often have to migrate here because life in their country of origin has became unbearable, often because of the imperialistic policies of our government or of other rich countries that can’t get enough power and money?

Everywhere around us are symbols of Canadian colonialism: army buildings, cannons, military museums, government offices, the Hudson Bay Company buildings (created to make money from trading furs with England), the prisons, the courts, the parliaments, town halls, offices of CSIS and RCMP. Be creative!

If you or your group is interested in organizing something in your town, write us at info@clac-montreal.net so we can coordinate together to have an unforgettable Anti-Canada day!