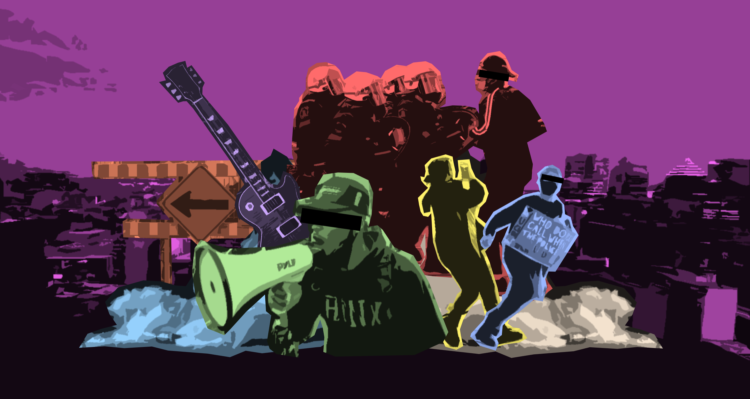 1. Nothing justifies police violence; whether we’re on a morning jog, using a counterfeit $20 bill, or breaking a jewelry store window. What the colonial state determines as crimes are often attempts at escaping poverty and systemic violence, or the result of these two things. We advocate for a restorative justice centered on the needs and experiences of victims, not a punitive justice centered on the needs of commerce and state control. Those who partake in protests while reproducing the discourse of the dominant class and playing police are doing the oppressors’ work.

2. We advocate for the removal of police forces, because even when they aren’t murdering Black and Indigenous people in broad daylight, they still maintain a social order modeled on capitalism and white supremacy. It’s cops who prevent homeless people from sleeping in empty condos, who kick poor families out onto the street when they can’t afford rent, and who beat up hungry migrants looking for a free meal in a billionaire-owned chain grocery store.

3. It’s up to us and our communities to develop autonomous mutual aid mechanisms that render police obsolete. This starts with having conversations with our neighbours, offering help when needed, or by learning how to support eachother during mental health crises.

4. Political vandalism is to be understood and violence against material property is a legitimate response to the violence committed by people in power. Every storefront window represents a barrier between us and a world inaccessible to us. They represent an urban landscape constructed to uphold an economic system that prevents us from sufficiently housing and feeding ourselves without spending most of our waking hours working. Graffiti and burning luxury cars mark a needed break in the daily, invisible, normalized state violence.

5. To those saying Black and racialized people are paying the price of violent revolt, we reply that we’re paying the price of daily life without violent revolt. A historical analysis of liberation movements can only highlight the necessity of a reversal of the balance of power, embodied by the threat of permanent insurrection. If pleading and begging for mercy was enough to make our oppressors consider our well-being, we would have stopped feeling the pressure of their knee on our necks a while ago.

6. To selectively read and amplify the discourse of moderate, depoliticized, and bourgeois Black people is an insidious form of racism that allows non-Black people to comfortably perform their allyship without jeopardizing their privileges. White people who truly care for our lives should read texts by Black revolutionaries and get educated on decolonial and anarchist ideologies.

7. The mainstream media and police discourse around last Sunday’s vandalism being an adventure separate from the otherwise docile protest isn’t based in an understanding of our motives. It’s simply a strategic discourse meant to weaken our movements. Their deepest fear is that we realize how insurrection isn’t the domain of a few specialized groups but rather the materialization of popular anger — and in turn realize that we can recreate May 31st anywhere, anytime, and with anyone.

8. The idea that only “white anarchists” participated in Sunday’s revolt is insulting to Black, Indigenous, and other racialized protesters who risked it all. Whoever said that must not have stuck around for very long. After the second and third waves of tear gassing, the majority of white marchers had gone home, leaving behind crowds of mostly Black protesters east and west of Saint-Urbain. In any case, all accomplices fighting alongside us are appreciated, more so than those of us reproducing police behavior or who are only concerned with keeping up with the Joneses of the white world — a world that suffocates us. Their success is a testimony of individual perseverance but never of a collective victory. We fight for an entirely different world.

9. Finally, when we chant “no justice, no peace”, we literally mean it. We want to bother those who can usually afford to live their lives oblivious to our pain. Last Sunday, as we were running to the rhythmic clanking of construction signs bouncing off the pavement and to the sound of glass shattering, it felt for a moment like those satisfied with the prevailing order wouldn’t be able to ignore us. No justice? Then no peace.