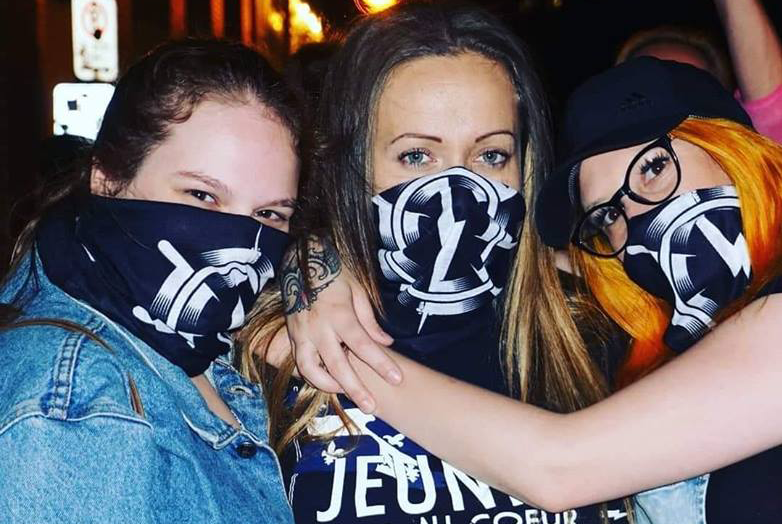 Montréal Antifasciste recently published an in-depth report on the neo-fascist organization Atalante Québec. That article covers Atalante’s links to similar organizations worldwide, as well as the group’s fascist-inspired political project. It also reveals the identities of most of the group’s core members based in both Québec City and Montréal.

One part dedicated to the RAC band Légitime Violence revealed that this type of organization needs to cultivate a presence in very specific communities, namely counter-cultural musical scenes, in order to recruit new members. This is precisely the role played by Légitime Violence, whose members are also all members of Atalante and which was started by the fascist group’s leader, Raphaël Lévesque aka Raf Stomper. We have also seen that a large proportion of Atalante’s members and sympathizers are fans of Légitime Violence, as well as fans of so-called “extreme” music subgenres such as National Socialist Black Metal (NSBM).

Many other scenes and groups (musical scenes, particularly those related to heavy metal; tattoo artists and shops; political communities; universities; the LARP scene…) also have links to Atalante and/or its members, to various extents. This means that the work of identifying all of the organization’s members and associates is far from over.

In the coming weeks and months, we will publish a series of short articles entitled ‘Atalante and its sympathizers.’ The overarching goal of the series will be to present public figures, individual members, or group associates who participate, in one way or another, in normalizing and popularizing Atalante Québec as a political organization.

In this first installment, we will introduce you to Heïdy Prévost, aka Heïdy Valkyrie, an active member of Atalante who dreams of a career as a social media influencer.

Heïdy “Valkyrie” Prévost was born on December 14, 1990. She lives in the suburbs of Québec City and is a mother to three children. She works at the Québec City Centre des Services partagés du Québec (CSPQ) (Quebec Shared Services Centre) and is a member of the Syndicat de la fonction publique du Québec (SFPQ) (Quebec Public Servants Union). On weekends, she occasionally works at the ParadoXe tattoo and body piercing salon (2480 Chemin Ste-Foy, suite 025 G1V 1T6 Québec). 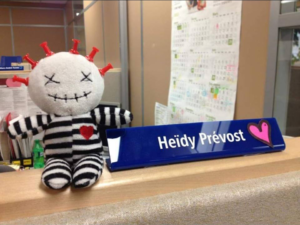 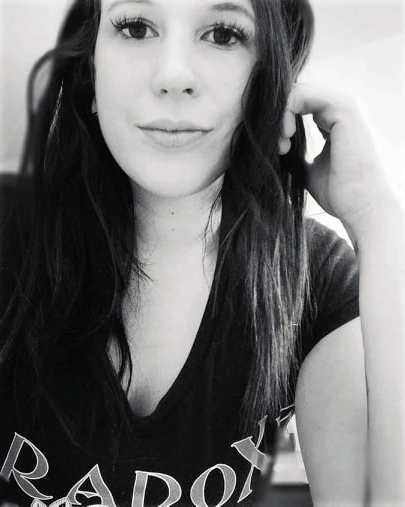 On the weekends, she works at the ParadoXe shop (she wears their T-shirt in this photo).

Heïdy Prévost is a multidisciplinary artist (singing, drawing, photography …) who has recently been developing herself as an “alternative model”, with the objective of becoming professional. She also seeks to represent brands, bands, etc. Like any good influencer, she is very active on Facebook and Instagram, where she shares her daily life. On both social networks, she maintains separate personal and professional accounts. Even though her professional accounts do not have a very strong audience yet, having only started a few months ago, she already has several photography contracts to her credit and has just signed a contract with the Montreal agency Dress 2 Impress.

From black metal to fascism

Heïdy would be just fine – if she wasn’t also an active member of the neo-fascist organization Atalante Québec. In fact, Heïdy has been close to the far-right for years. She probably entered the movement through her involvement with the Black Metal scene in Québec, many of these bands being openly racist and/or claiming to be National Socialist Black Metal (NSBM). To read more about the Black Metal scene, check out this article “Épidémie de peste noire dans la scène black métal”, written by French antifascist group La Horde. 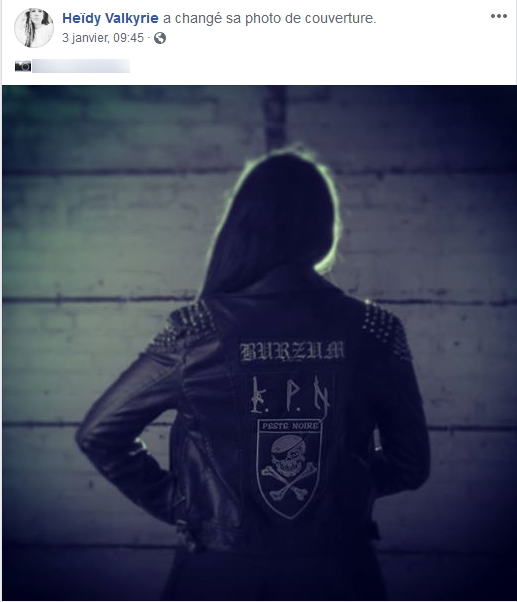 Heïdy is pictured above with Burzum and Peste Noire patches, both NSBM (National-Socialist Black Metal) bands. 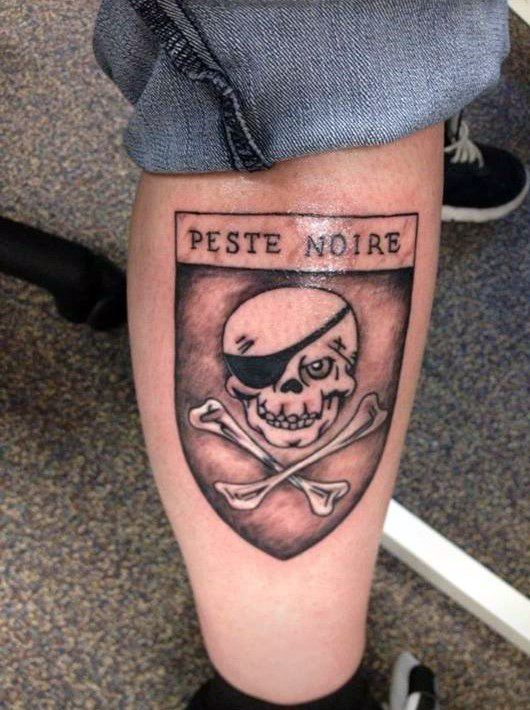 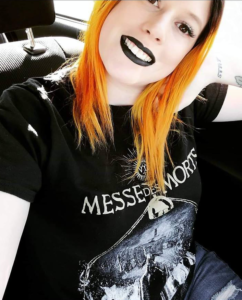 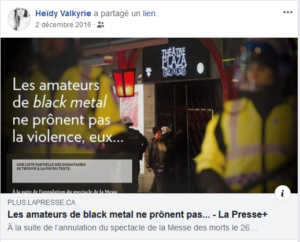 We see her here wearing a shirt branded with the Black Sun symbol – this is a variant of the swastika, now recognized as having been created by Nazis. 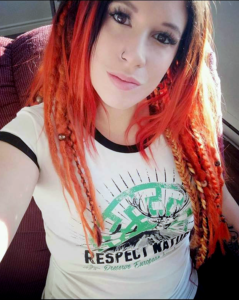 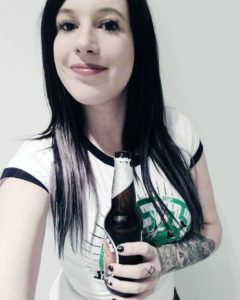 On the above photo, we also note her Odal Rune tattoo (on her hand), a symbol taken from ancient Nordic imagery and widely used by neo-Nazis as an identifying sign. (See also our visual guide of the Far right.)

It’s hard to say precisely when Heïdy began campaigning alongside Atalante. That said, the next series of photos constitute proof of her direct involvement with the organization and its activities. The following are photos of a food distribution activity conducted by Atalante in the summer of 2018, and shared on the organization’s website and official Facebook account. Furthermore, Heïdy Prévost proudly shared the same images on her personal Facebook and Instagram accounts. 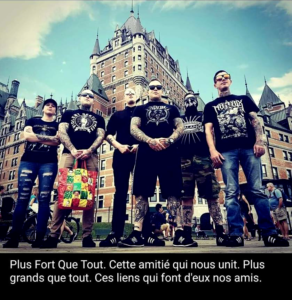 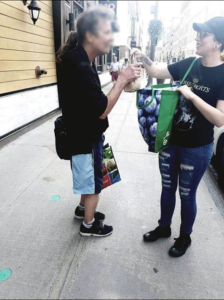 Heïdy Prévost in the middle of one of Atalante Quebec’s food distribution excursions. 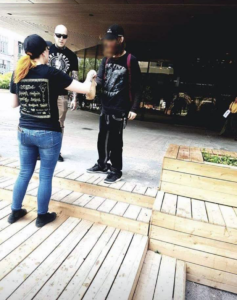 She is therefore an active member of the organization, and recently announced her participation in an Atalante training, which took place over the weekend of November 24-25. On the program: ideological training and boxing. « Jeunesse au cœur rebelle » (Rebel-hearted youth) is an Atalante slogan. 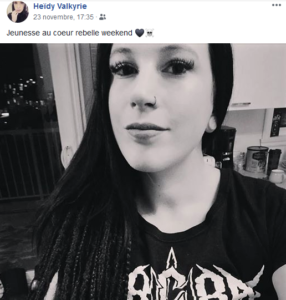 A simple overview of Heïdy’s publications confirms that she is friends with Atalante’s overall membership, and particularly with the core of the organization: the Québec Stompers. Here is a screenshot of people who reacted to one of her Facebook publications:

Screenshot of the reactions to one of Heïdy Prévost’s Facebook posts. Jonathan Payeur, Benjamin Bastien, Yannick Vézina and Raf Lévesque are all prominent members of the Québec Stompers crew. 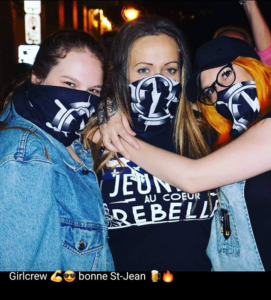 Very recently, we saw Heïdy posing with Jean Mecteau (Jhan Delabanniere), bassist of the group Légitime Violence. On another occasion, when unrepentent Nazi scumbag Shawn Beauvais-MacDonald (Hans Grosse) – a member of Atalante’s Montreal branch who was present at the deadly Charlottesville protests – posted an anti-Semitic reaction photo in response to the name of a party Heïdy and her friends were attending (a photo of him with a long nose, a typical racist caricature of Jewish people), Heïdy responded with an amused reaction emoji. 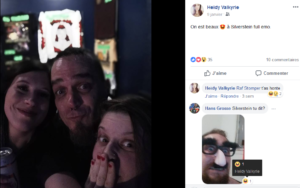 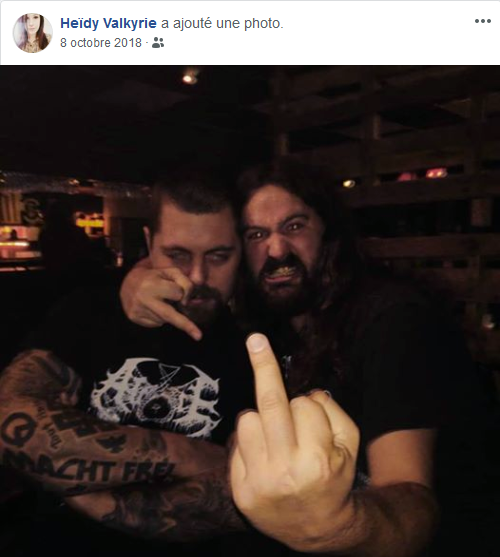 Heïdy shares a picture of Olivier Gadoury (left), of the Québec Stompers and Atalante. Note the “Arbeit macht frei” (work sets you free) tattoo, the infamous phrase posted at the entrance of the Nazi death camp in Auschwitz.

The other problem – and the reason we are devoting an article to her – is that she is one of the key people working to give Atalante a respectable, even glamorous, image. How is she doing this? She slips references to Atalante (stickers, clothing, chants, …) into more innocuous posts and updates on her photo shoots, her daily life, her professional life and her projects – just like product placement in a TV show. 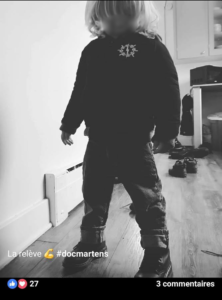 A photo of one of Heïdy’s sons wearing an Atalante sticker, captioned «La relève» (the succession).

Her guitar, decorated with an Atalante sticker. A few months later, we find the same guitar with multiple other Atalante and far-right stickers, including this one: 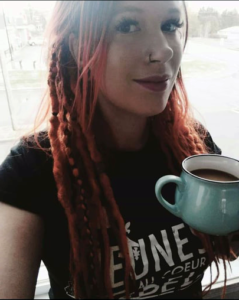 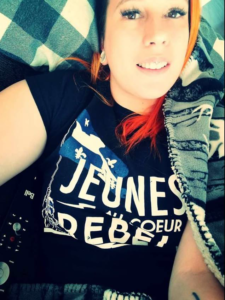 Even more disturbing is the fact that Heïdy seems to be very successful in creating confusion even among anti-racists, since she is booked as a “one-night waitress” on February 21, 2019 for a special event at Scanner Bistro, a pillar of Québec City’s punk community – the same punk community which has a reputation for not tolerating the far-right. 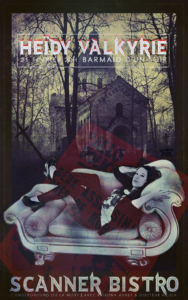 Scanner Bistro announces a special evening with Heïdy Valkyrie as a “one-night waitress.” 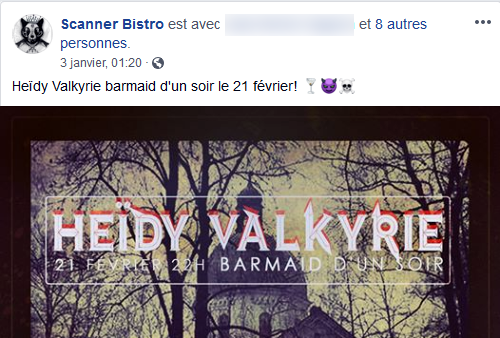 [Update: the Waitress for Night event at Scanner with Heïdy Valkyrie was cancelled within two hours of publishing this article.]

Fighting fascism – in all its forms

We can conclude that Heïdy Prévost, aka Heïdy Valkyrie, is not an ideologue for the organization, nor is she its most active member. But, much like Légitime Violence, she represents Atalante in her own way.

We implore the punk and metal music scenes, the tattoo and piercing scenes, and photo artists – don’t be fooled, and firmly refuse the presence of fascism in whatever forms it may present itself.