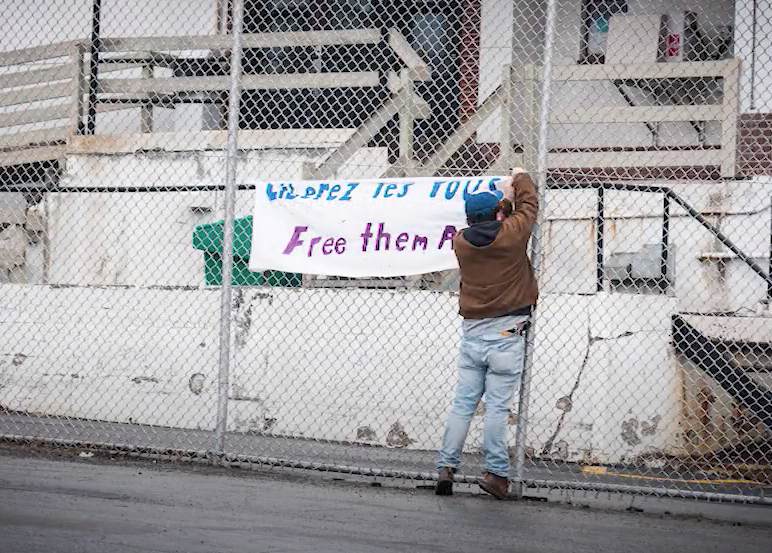 After two months of resistance by detainees and their supporters, the Laval Immigration Holding Centre now stands almost empty. Only 2 men and 1 woman remain inside, watched over by dozens of guards. While the struggle continues to empty this prison entirely, and to ensure it never reopens, we now confront other ways the state controls migrants and is even pushing forward new forms of surveillance under cover of the pandemic.

At the end of March, detainees in Laval’s migrant prison (run by the Canadian Border Services Agency (CBSA)) undertook a brave, 8-day hunger strike demanding immediate release. Through written statements and daily audio updates, their call gathered support from Halifax to Vancouver. While the government refused to publicly concede to the demand to free them all – even after guards tested positive for COVID in both the Montreal and Toronto migrant prisons – the detainees’ releases were accelerated through individual detention review hearings. With deportations suspended, there seem to have been no new detentions and the centre has emptied.

However, migrants are also imprisoned in provincial jails. Quebec’s jails have the highest COVID-19 infection rate of any province, but the government has refused calls for a comprehensive release plan. Instead, guards have used pepper spray and force against prisoners who have taken action to protest the life-threatening conditions being forced on them. On May 5th, prisoners in Quebec’s Bordeaux jail responded to these conditions by beginning a brave hunger strike that continues at the time of this writing. Some migrant detainees have been transferred from Leclerc and Rivière-des-Prairies (RDP) provincial prisons to the Laval migrant prison and then released. As of April 28th, 15 men remained in RDP on immigration holds while over 100 more remain in provincial jails across the country.

For many migrants, getting out of the detention centre has not led to much greater security or freedom. Release often involves large cash bonds (in effect, some of the poorest in society are paying thousands of dollars to the state to secure their freedom). Many still face deportation and in the meantime live in precarious housing with no income. Work permit processing is currently suspended for those requiring biometric data and welfare takes weeks or even months to process for those who are eligible. Conditions of release may include frequent reporting to CBSA, living with one’s bondsperson, and even curfews and confinement to defined area perimeters. Moreover, through its new “Alternatives to Detention” programme, the CBSA is outsourcing control of migrants to third parties such as the John Howard Society, which oversees punitive parole-like “case management” programmes in Quebec, sometimes in combination with GPS-voice recognition tracking.

Under cover of the pandemic, the CBSA is now also attempting to introduce ankle bracelets to GPS-track migrants in Quebec, “offering” it to several detainees as the price of freedom. We do not know whether anyone has already been released under this condition. While lawyers can fight the bracelet being imposed on their clients, the legal fightback is time-consuming and may not appear worth the effort to all lawyers.

As Quebec moves to send more workers into dangerous conditions during the pandemic, construction work on CBSA’s new migrant prison in Laval is set to resume as well. While people continue to get sick and die in prisons and detention centres across the country, and while so many are struggling to get by, it is appalling that the state would choose to continue the construction of a new prison and divert resources into intensifying surveillance of migrants.

Free them all! Status for all!