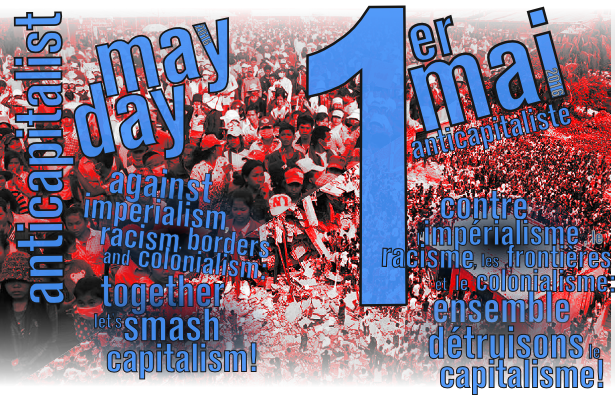 THIS YEAR AGAIN, THIS IS A CALL FOR ECONOMIC DISTURBANCE IN DOWNTOWN MONTREAL, NAMED BY THE BOURGEOIS THEMSELVES AS THE NEW “GOLDEN SQUARE MILE”, ESPECIALLY THE PERIMETER FORMED BY THE SHERBROOKE, RENÉ-LÉVESQUE, PEEL AND UNION STREETS.

Again this year, the attacks against workers were dazzling : permanent economic crisis, increases in the cost of living, bosses and governments squeezing even more from employees. Notwithstanding the sacrosanct deficit zero we’ve been getting served for the last 20 years to justify cuts in social programs and help provided to poor workers and unemployed people. To divide our resistances even more, they wave the specter of terrorism and unearth xenophobia on a part of the population to encourage anger toward migrants, foreigners and people of color. Workers, the unemployed, students from everywhere in the world must unite against capitalist power. Against these attacks we must answer with solidarity:

The bombings and the occupations of Iraq and Afghanistan, amongst others, have destabilized these regions and have created the conditions for a unification of local armed groups against occidental control. With the puppets and ISIS, the war in Syria is just another chapter in an imperialist war between the big States of this world to access resources. This is why the bombings only reinforce anger against the occupying forces, destabilizing the region even further.

Control of the middle-eastern governments is crucial for the Global North in order to access oil reserves and cheap labor. The arbitrary imperial frontiers drawn after World War II serve to exclude the world population from wealth that has been accumulated in Europe and North America.

If we don’t oppose these massive injustices, we are complicit in a racist regime, which creates the “everyday low prices” of our occidental overconsumption. Let’s also not forget the rise of racism, by way of physical attacks on migrants (or identified as such, often by mistake), but also all the forms of exclusion and discrimination reinforced by the hyperselective migration system.

We need to recognize that goods accumulated in Canada are directly derived from the land stolen from Indigenous Peoples, who are also the first victims of the economic development projects that are necessary for the permanent economic growth of capitalism. The government thanks these communities by closing their eyes on the police violence that they endure, and by ignoring the murders of their women. Our struggles must help out all those displaced by capitalism, whether those put on reserves, or those coming to our doors by the conflict we have caused abroad.
Together, let’s smash capitalism!

As long as there are workers that can be exploited for less, here or abroad, wages will be pushed down. As long as our struggles do not include all those suffering under capitalism, the governments will keep cutting down other oppressed folks to give crumbs to the rest, while keeping the biggest part of the cake for itself. This is why class war requires an understanding of how our interests oppose those that are getting richer every year because of the increasing gap between rich and poor, whether locally or internationally. Let’s celebrate a Mayday of real solidarities ! Let’s not become divided ! Lets attack together those who benefit from these conflicts, and overthrow capitalism while we still have time ! 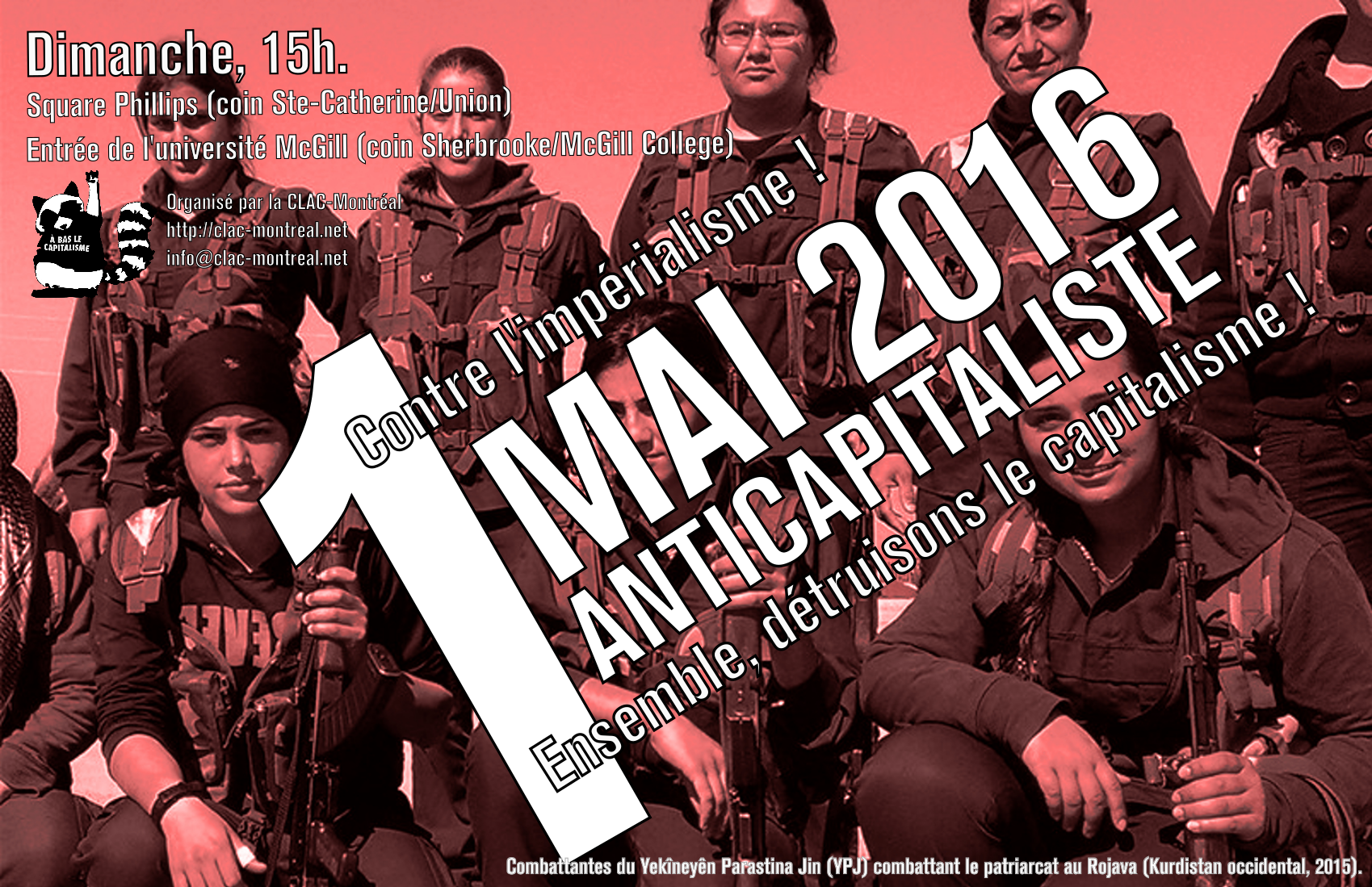 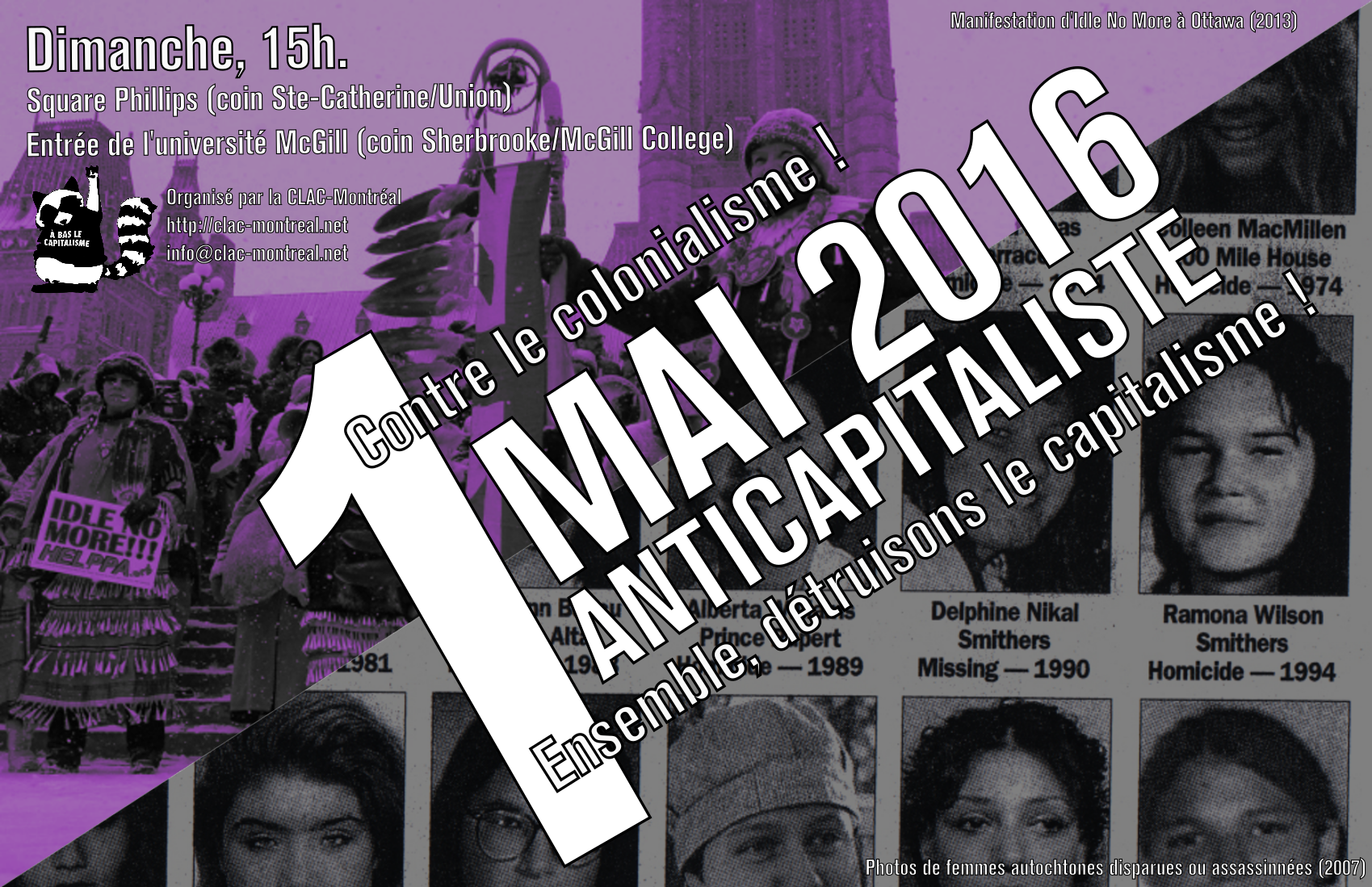 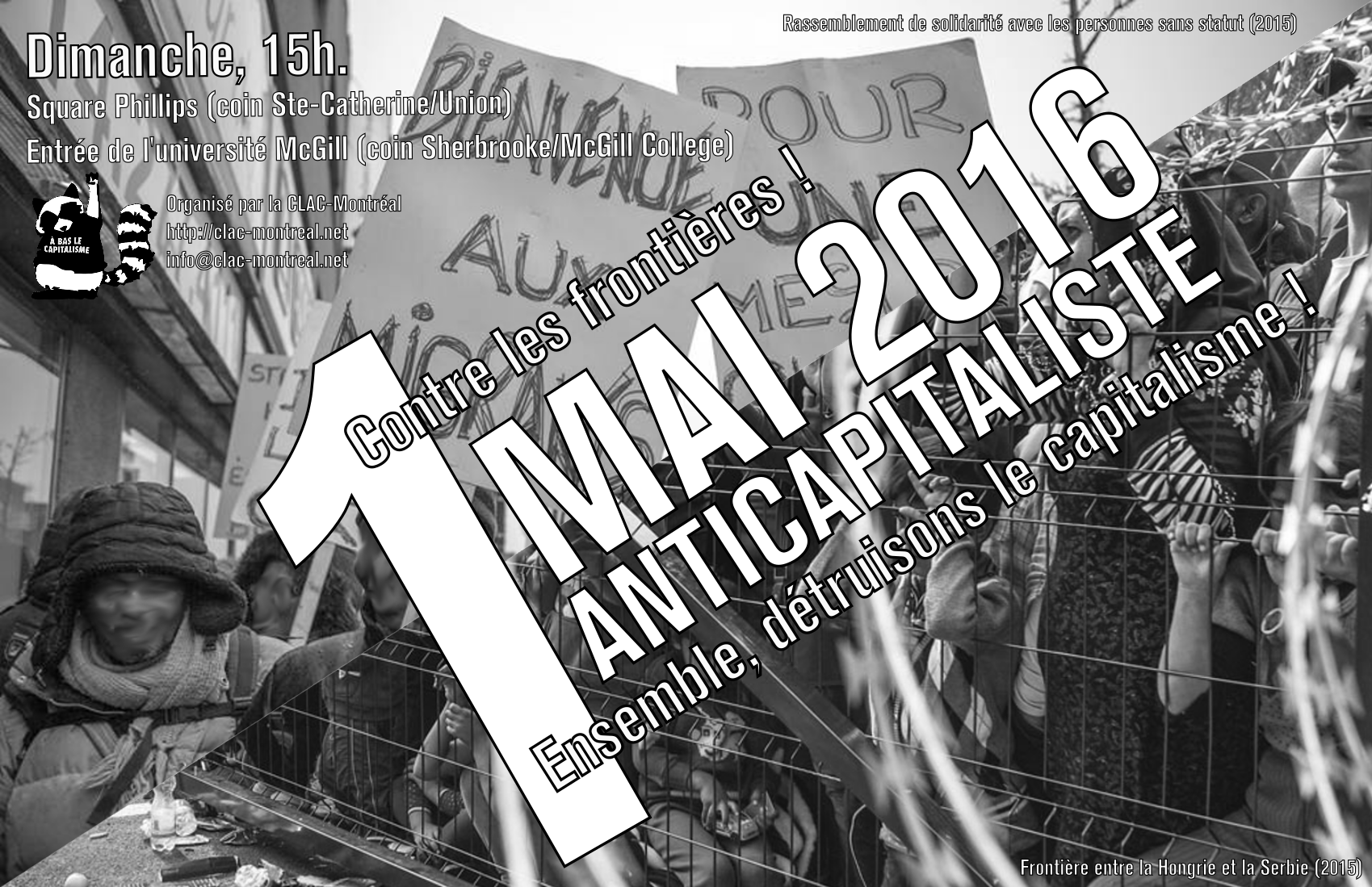 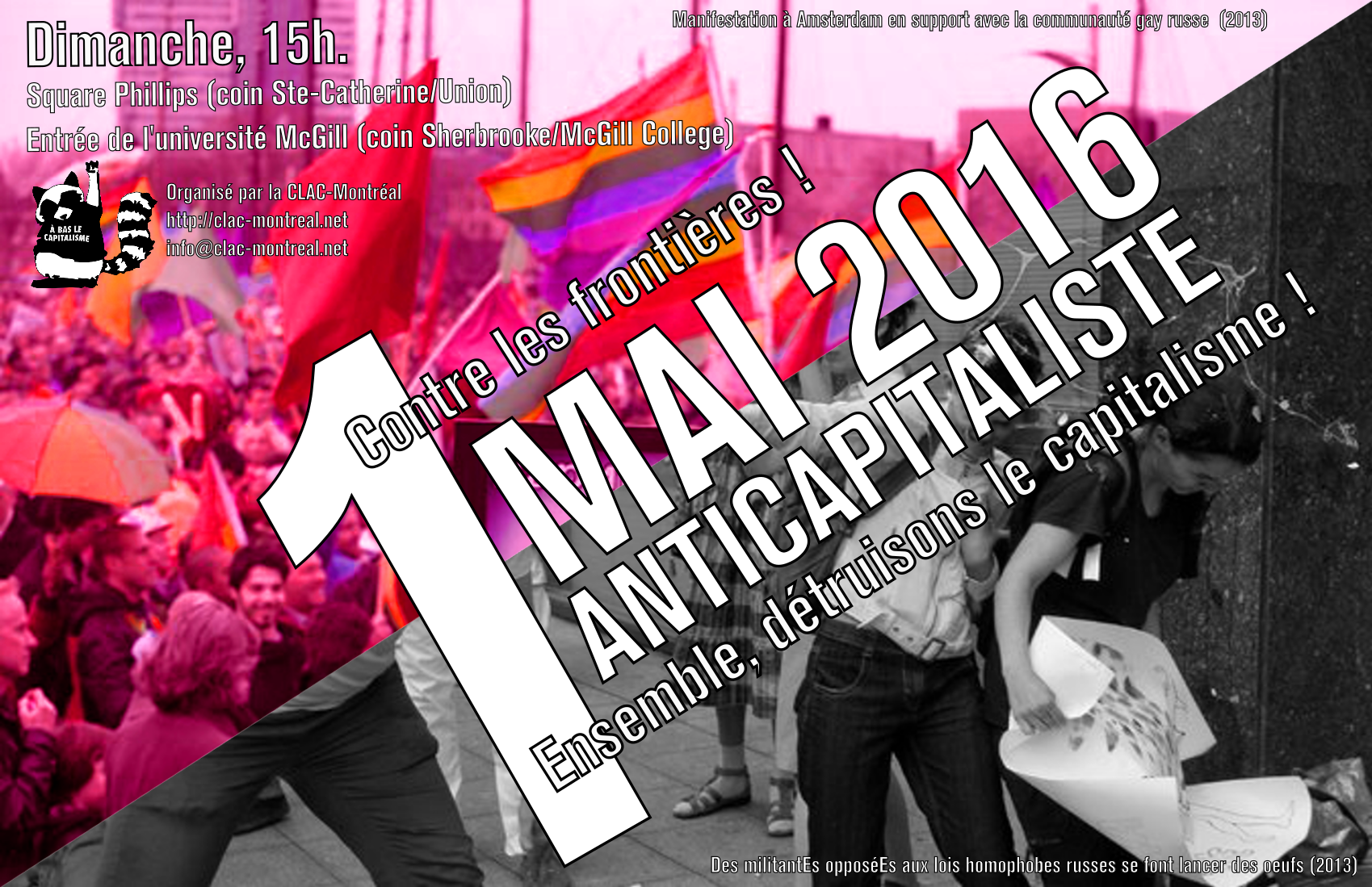 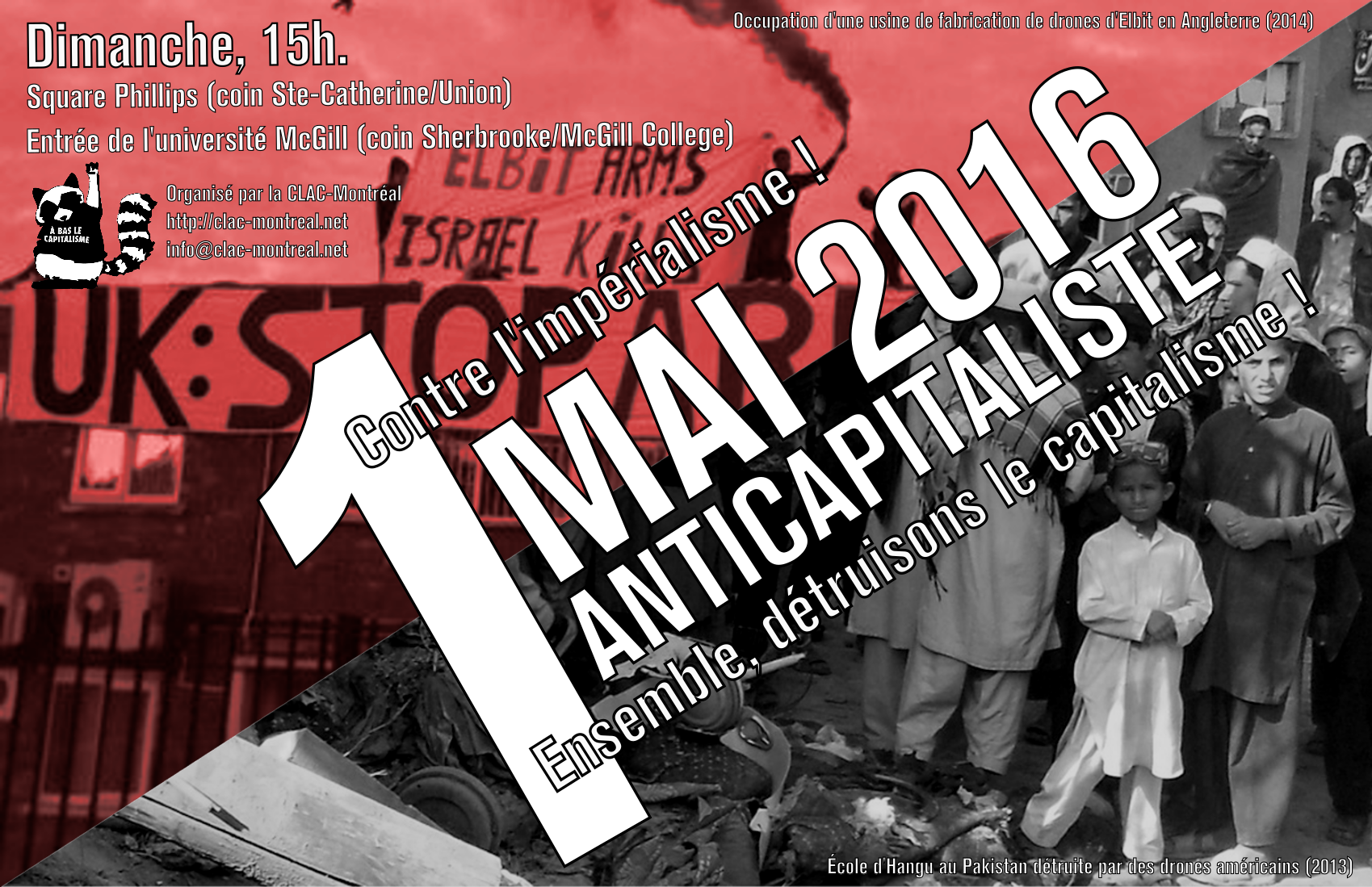 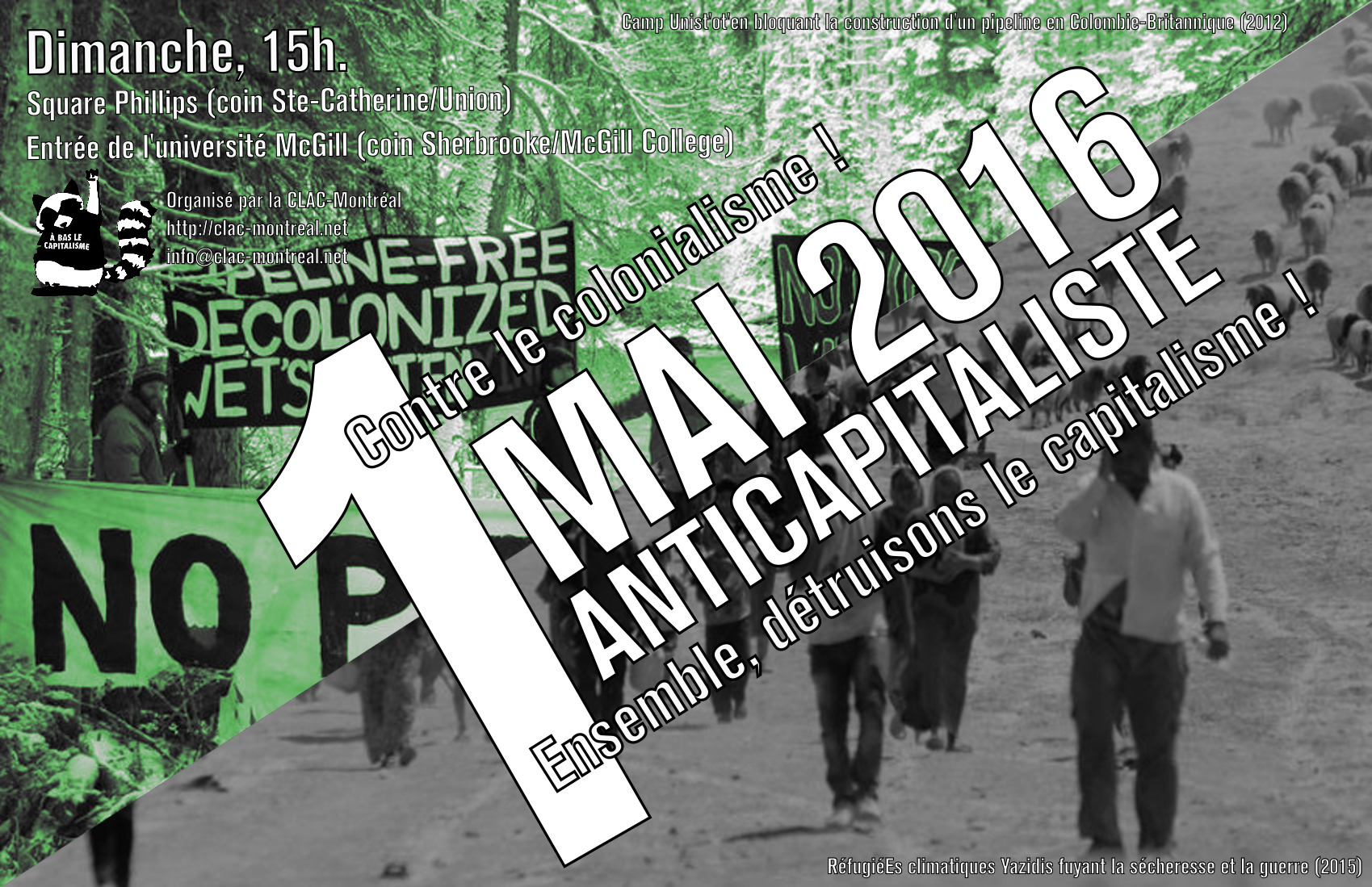 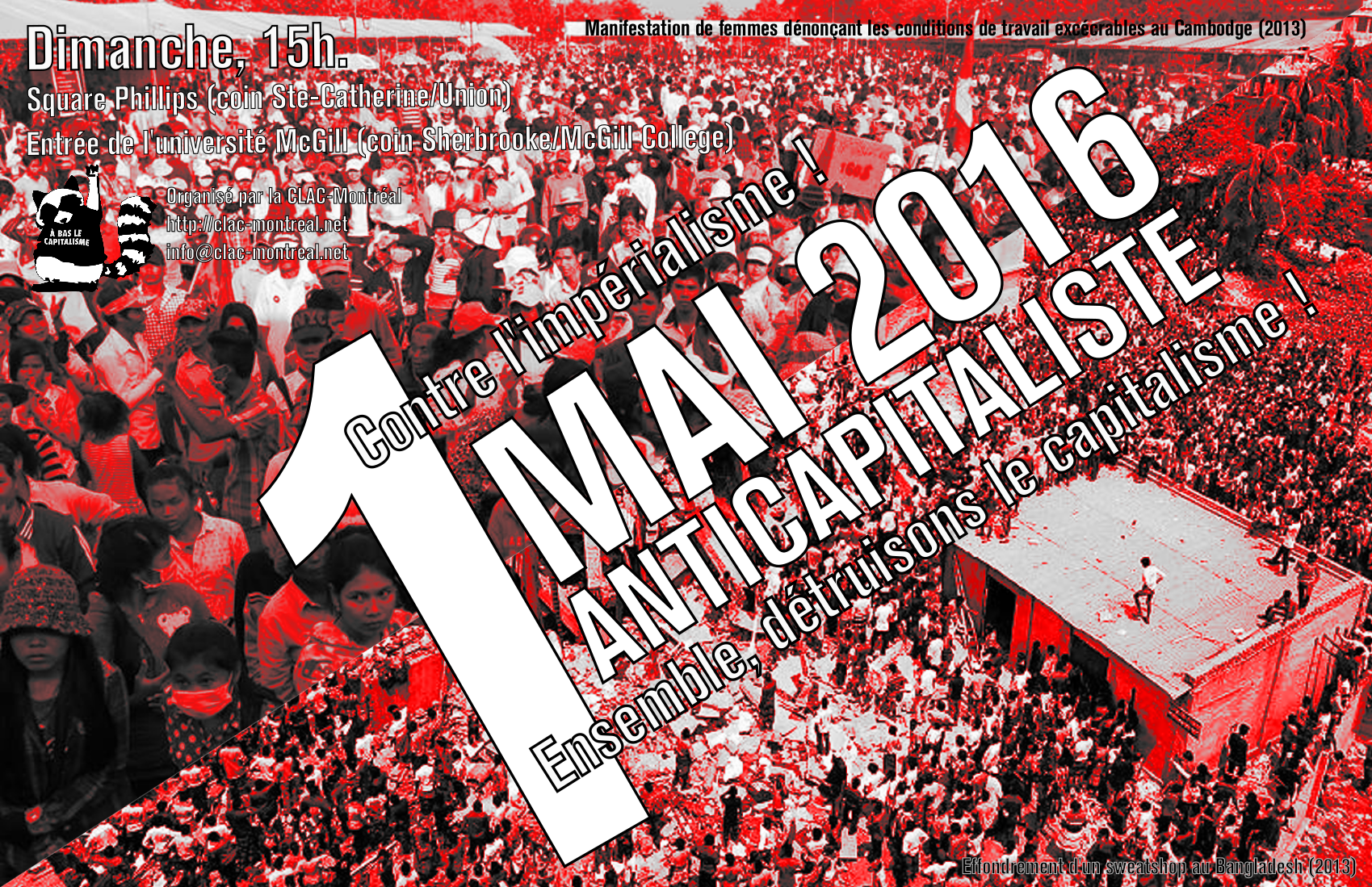