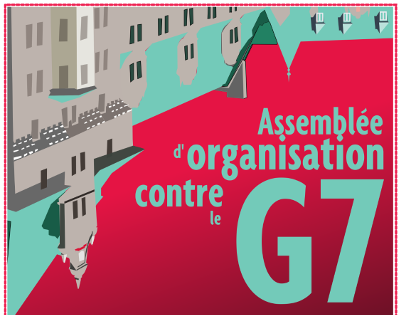 Anti-G7 resistance is revving up! The yearly G7 meeting will happen on Friday June 8th and Saturday June 9th at the Manoir Richelieu in La Malbaie. Is there a better place than a casino to welcome the corruption and collusion of the wealthiest powers of the world? The G7 summits are used by these seven presidents and prime ministers for shaping our world, and are therefore followed everywhere by the resistance against them. We won’t leave them in peace!

The next organization meeting will be held on Saturday, November 18th from 1PM to 5PM at Comité social Centre-Sud, 1710 Beaudry, near the Beaudry metro station. The room is wheelchair accessible.

This assembly follows one held in September, where a brief introduction of the G7 was made and where five basic decisions were taken. Two of these decisions were about activities:

The other three decisions were about structure:

For the November 18th assembly, we’d like to get things moving forward. Two proposals emerged from the September assembly, but they are still vague. We’d like everyone to come to the next assembly with more elaborate proposals. It is time to start thinking about what we’d like to do exactly, where we want to go, who we want to confront. Though, please note that the assembly is public; make sure that what you want to propose can be debated in public.

Everywhere the G7 meets, populations gets mobilized, protest and resist! People in Italiy and Germany mobilized against the G20 this summer, make sure to take the relay and prove our solidarity with all the peoples of the world. Spread this call to people and collectives resisting the capitalist hydra!