In memory of Pavlos Fyssas, a 34 year old anti-fascist rapper who was murdered by a Golden Dawn member in Greece, we spent an evening postering hundreds of anti-fascist posters against Golden Dawn, whose members have opened a chapter in Montreal. 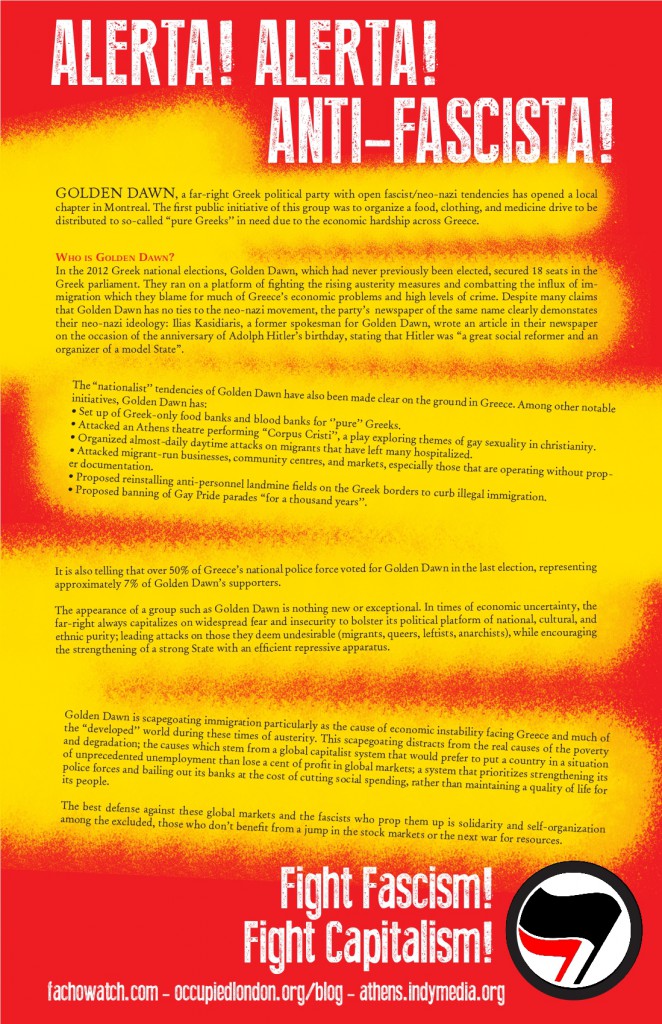 Golden Dawn, a far-right Greek political party with open fascist/neo-nazi tendencies has opened a local chapter in Montreal. The first public initiative of this group was to organize a food, clothing, and medicine drive to be distributed to so-called “pure Greeks’’ in need due to the economic hardship across Greece.

Who is Golden Dawn?
In the 2012 Greek national elections, Golden Dawn, which had never previously been elected, secured 18 seats in the Greek parliament. They ran on a platform of fighting the rising austerity measures and combatting the influx of immigration which they blame for much of Greece’s economic problems and high levels of crime. Despite many claims that Golden Dawn has no ties to the neo-nazi movement, the party’s newspaper of the same name clearly demonstates their neo-nazi ideology: Ilias Kasidiaris, a former spokesman for Golden Dawn, wrote an article in their newspaper on the occasion of the anniversary of Adolph Hitler’s birthday, stating that Hitler was “a great social reformer and an organizer of a model State”.

The “nationalist’’ tendencies of Golden Dawn have also been made clear on the ground in Greece. Among other notable initiatives, Golden Dawn has:
• Set up of Greek-only food banks and blood banks for “pure” Greeks.
• Attacked an Athens theatre performing “Corpus Cristi’’, a play exploring themes of gay sexuality in christianity.
• Organized almost-daily daytime attacks on migrants that have left many hospitalized.
• Attacked migrant-run businesses, community centres, and markets, especially those that are operating without proper documentation.
• Proposed reinstalling anti-personnel landmine fields on the Greek borders to curb illegal immigration.
• Proposed banning of Gay Pride parades “for a thousand years’’.

It is also telling that over 50% of Greece’s national police force voted for Golden Dawn in the last election, representing approximately 7% of Golden Dawn’s supporters.

The appearance of a group such as Golden Dawn is nothing new or exceptional. In times of economic uncertainty, the far-right always capitalizes on widespread fear and insecurity to bolster its political platform of national, cultural, and ethnic purity; leading attacks on those they deem undesirable (migrants, queers, leftists, anarchists), while encouraging the strengthening of a strong State with an efficient repressive apparatus.

Golden Dawn is scapegoating immigration particularly as the cause of economic instability facing Greece and much of the “developed’’ world during these times of austerity. This scapegoating distracts from the real causes of the poverty and degradation; the causes which stem from a global capitalist system that would prefer to put a country in a situation of unprecedented unemployment than lose a cent of profit in global markets; a system that prioritizes strengthening its police forces and bailing out its banks at the cost of cutting social spending, rather than maintaining a quality of life for its people.

The best defense against these global markets and the fascists who prop them up is solidarity and self-organization among the excluded, those who don’t benefit from a jump in the stock markets or the next war for resources.