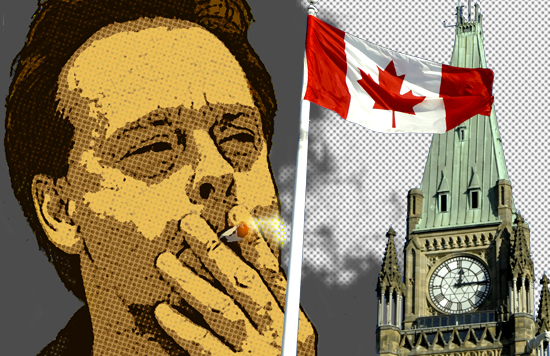 The text that follows is part of a zine that was handed out at 4:20 this year in Montreal, along with two other texts that were posted to anarchistnews.org recently (A Lament for Criminality and Psychonauts Can Also Be Pirates: How to Do Drugs and Get Free). A report-back from the event will soon follow with a pdf of the zine for others to hand out elsewhere at similar events.

I approach the “issue” of weed legalization, and the spaces it inhabits with two main things in mind:

Perhaps in our desire to show the seriousness of our positions (or because we think we’re too cool?), it seems we have abandoned non punk, queer, or hipster alternative spaces to the right wing and liberals. These spaces are dominated by people we have no affinity with as anarchists, but are participated in by all sorts of (at least mildly) rebellious youth who are hostile to certain aspects of law and order, and don’t take “cannabis culture ” on as the stupid identity it usually is. As an iconoclastic weirdo who tends to get along with lots of people, but never really fits in anywhere in particular, I hate the tendency of anarchists to voluntarily pigeonhole ourselves.

I’ve always been disgusted by the racist and anti-working class prejudiced elements of the right-wing of the weed legalization movement which is largely dominant where I come from: Vancouver. I want to intervene in these spaces to show other potential rebels that there are non-reformist paths to take, and that we should not be striving for legitimacy in the systems which feed our misery and alienation.

In honour of all the old friends and acquaintances who are dying at a horribly tragic rate in the fentanyl epidemic in the Lower Mainland in BC, that neither the right-wing of the weed legalization movement, nor the left-wing of those focused on harm reduction can adequately address. What is needed is an all-out assault on both the state and the bosses who have left us all totally disempowered and isolated, towards a free and creative individuality based in rebellious communities that the neoliberal world intends to destroy and erase.

A war has been raging for over a millennium. A lot can be said about this war, but generally we can sum this up as the consolidation of force, resources and legitimacy through the dispossession and commodification of humanity and the earth. We can call this war the state. This war initially only affected small parts of the world, around the territories controlled by various empires such as the Incas or Egyptians. But by now, after over five hundred years of capitalist globalization, this war effects nearly the entire earth, with only small pockets such as in Papua and the Amazon rainforest remaining out of reach. Consistent waves of domination and exploitation have brought greater levels of wealth and control to the powerful and greater tragedy to the dispossessed. Through these processes, people have been enslaved or otherwise exploited, genocides have been carried out, and whole ecosystems have been reduced to their chemical components.

But what does this all have to do with the “drug war”?

Since this war has always been about dominating people, cultures, animals and the environments they inhabit, it has also been about controlling peoples thoughts, what they can do with themselves, and what they can put in their bodies.

For example, during the middle ages, elements within european society, primarily peasants, had retained certain aspects of their pagan, pre-christian cultures. These cultures emphasized a strong connection to nature and sexuality, less rigid gender roles, queer sexuality, women’s control over their own pregnancies, and the taking of medicinal herbs and psychoactive drugs for spiritual purposes. In order to gain more control over their rebellious populations, European states carried out military campaigns, branded as Crusades, and Inquisitions that went on for hundreds of years. People who engaged, or were rumored to have engaged in these kinds of behaviors, were tried as “witches” and “heretics” with many people, especially women, being tortured into confession and burned at the stake. In many cases the cost of running the inquisitions was paid for by the accused, who’s property was seized and divided between the judges and accusers.

At the time, there was also free land that belonged to no one, and was shared by all the peasants of the local areas, referred to as “the commons”. This land was used for harvesting herbs and cultural practices separated from the church (of which there was only one you were allowed to belong to at the time). The commons were gradually swallowed up by the privatization of land during the Crusades and Inquisitions.
We can see parallels to this history in the legacy of colonization here in the place we call “Canada”. Native people’s languages and cultures, which also had strong connections to the land and the wild plant-life upon it, were made illegal, with native children being forced into religious schools, and taught to hate themselves and their cultures. This all coincided with a massive dispossession of land from native peoples, by state and private landowners, as well as through the creation of Parks – that is, places where people could visit and observe a wilderness from which they had been alienated, but where they would be forbidden to live as a part of the land.

Looking specifically at the “issue” of marijuana, we can see that along with opium and cocaine, the laws that first criminalized its use were part of a racist narrative targeting Chinese, Mexican and Black people in the United States, with the same logic being applied throughout much of the British colonial empire. A key element of this racist narrative, was a paranoia that white youth were being coaxed into interracial relationships through use of these drugs, which was seen as an attack on white-supremacy.

The “drug war” has never been a purely local issue and has until today played an important role in capitalist globalization. The “drug war” is an important fixture of modern capitalism, and fills prisons locally, disproportionally with people of colour. In the United States, the flooding of crack and heroin into poor neighborhoods is part of a well documented government strategy to repress rebellious social movements.
In places like Mexico, where the government is often referred to as the “narco-state”, the “drug war” plays an important role in terrorizing workers and peasants. Paramilitary organizations play a role in a process started by the North American Free Trade Agreement that dispossesses indigenous people of their collectively worked lands to open them up for the growing of Coca to produce cocaine, as well as legal crops like Avocados for the global capitalist market. This has a triple effect of producing profits for capitalists, keeping workers and peasants obedient though fear, and repressing, delegitimizing and denying resources of rebellious social movements.

This is a dire situation, and it is sad to see the response it gets from the weed legalization movement here in Canada. While it is true that we are up against a vast enemy, and this enemy can only be attacked in parts, the reformist tunnel-vision being pushed by the likes of Marc and Jodie Emery will only strengthen the system we need to oppose. We can’t effectively address only one minuscule aspect of this war, because the monster we are fighting will continue on its path of misery and destruction from other angles.

If the weed legalization movement is successful in its meager goals, this will only mean greater profits for liquor and pharmaceutical corporations, and a few small business owners (like Marc Emery). The rest of us will lose the opportunity for tax free income, our weed can be regulated and filled with more chemicals that it already might be, harvesting the infinite variety of other wild medicinal herbs will become more precarious as the land continues to be plundered and poisoned by industry, and the carceral system will always find more reasons to kill and imprison people of colour, as well as poor or working class people, in the same ways it always has. In fighting prohibition it is important the we question the notion of legality itself.

It’s important to point out that along with preventing a broader analysis of the problem itself, the weed legalization movement distracts us by emphasizing pacifism and ineffective lesser-evilism in favour of various political parties during election time, to attain its goals. Sadly, it also emphasizes solidarity towards only “non-violent” drug offenders (meaning white middle class business owners), and we are unable to practice an expansive solidarity through action – one that considers those who are not perfect innocent angels, those who might have trouble surviving in this world for a million reasons – that could actually address the problem.

Yes, it is important to fight against the absurdity that is the possibility of being kidnapped by armed police for lighting a plant on fire. But it is also important to break and help others break all the other absurd laws too.

This war that is the state has never been a complete victory and defeat. Historical resistance to domination has included communities of escaped slaves (known as maroons) that organized and attacked their former masters, Native communities engaging in long-term struggles against colonizers; women, queer and trans people self-organizing to defend themselves against attacks and living joyful lives on the margins of a society that wants to destroy them; youth and counter-cultures taking their freedom into their own hands, women taking control of their own bodies and refusing the logic of patriarchy, workers sabotaging machinery that deepened their subjugation under the economy, and a multitude of other forms.

Total war against the market and hierarchy!

Free weed, free lives and free lands for all!