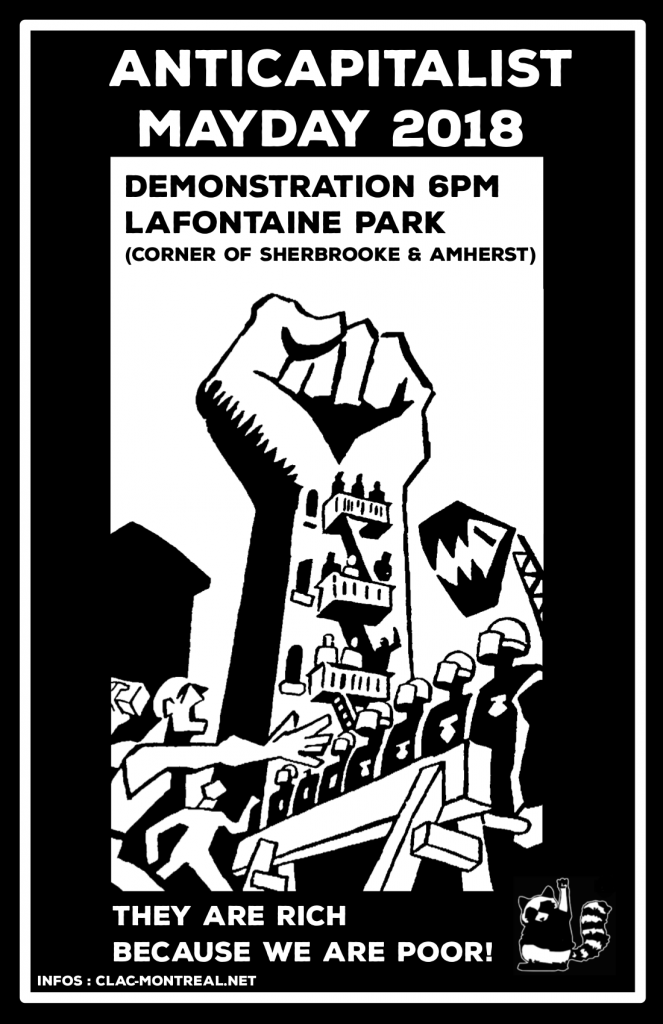 Now as before, they are rich because we are poor.

The financial masters of the Western world and seven of their political puppets will meet later this year at la Malbaie. They will fight to continue the exploitation of the global South and the pillaging of natural resources. The G7 will be a magnificient circus, paid for by our own exploitation. Paid by those who break themselves at work, by cut to social services, to education, to healthcare, to human dignity. A circus which will encourage free work given by unpaid internship, which will support the staggering profits of real estate moguls forcing us outside our homes. A circus whose sole goal is to promote an immoral statu quo. Imperialism and colonialism will be celebrated, at the expense of those who produce most of the world’s wealth. But it is not too late to fight back.

We cannot stop to dream for a better world. There will be hope as long as there are people dreaming of solidarity between all people. Our duty is to quench the flames of hate, and to carry that dream to everyone. Facing despair, it can be easy to turn against each other. After all, our neighbors are easier to reach than our exploiters.

This ease is taken advantage of by shameless profiteers, which exploit the divisions between us all to flee with their ill-gotten loot. For an ounce of political capital, fake news are published against migrants, hiding the awful exploitation they face in their home countries from quebec and canadian companies. Bombastic statements are made for the rights of native peoples, but noone gets offended when they get assassinated in plain day by notorious racists. People get worked up for the free speech of idiots spreading calls for genocide. Obvious lies are distributed at face value, from a smiling far-right who hides its assault rifle.

They are rich because we are poor. Two years ago, 130 persons owned as much as half the poorest of the world. Last year, this wealth was within the hands of 85 persons. This year, they are only fifty. Fifty misanthropes, isolated, which try to shove their vision of the world down our throat. Fifty against the whole world. We might be poor, but at least we are poor together.

After 132 years, there will be, once again, an anticapitalist MayDay, because this world is still unjust. But, unlike those fifty rotten leaders, we will come together in solidarity.