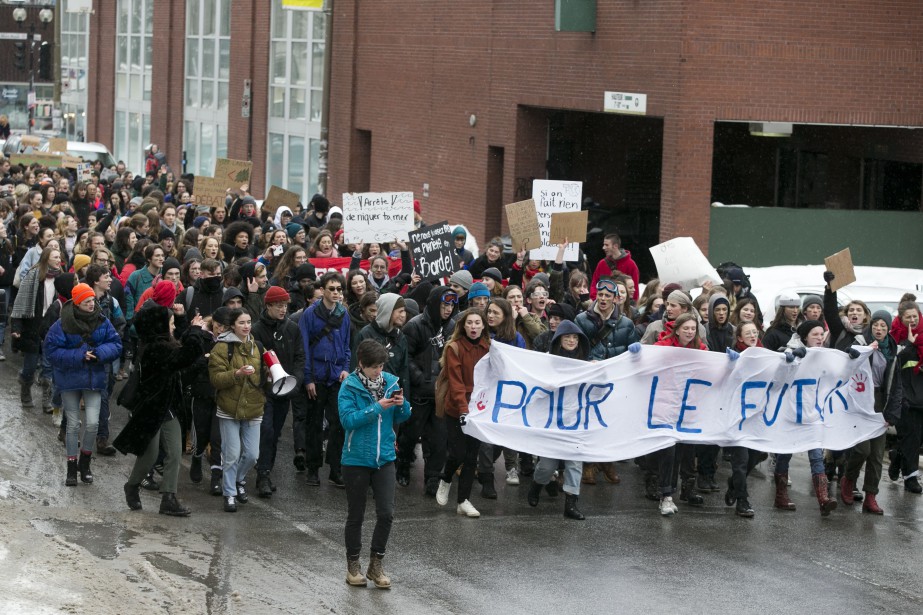 We’re asking ourselves if we want to go to the March 15th climate demo. We tried to go to a reformist demo for the planet a couple months ago. It felt like crap. We’ve been in demos before where we weren’t feeling it, where we didn’t feel in our place (like in a union demo). But there it was really of an entirely different order. Like total incommunicability between our bodies and theirs (or something like that). Like, we didn’t even feel like we were on the same side of the barricade.

The thing is, we came to realize, in that struggle there is no barricade whatsoever.

It’s a struggle without conflict, without antagonism (moreover, it isn’t a struggle). These citizens see themselves as all in agreement and all guilty (as is proper to citizenship, we might add). So we don’t hold it against this movement that it isn’t going far enough, as we reproach so regularly syndicalism’s remaining elements of class struggle. We hold against it what it prevents, by mobilizing people as interior to the system, therefore amputating the negativity of their struggles. We take issue with it for spreading so widely the myth of entirely positive action, where “initiatives” are not corollaries of the destruction of that to which they claim to be alternatives.

That said, as weak as these foundations appear to us, one really gets the impression that people seem to be doing shit. They’re becoming zero-waste, they’re refusing to eat pork roast in their family dinners, they’re dropping out of social sciences to go study agriculture in VICTORIAVILLE (?!?)

Maybe it doesn’t only suck.

We ought to think through the fact that anxious anticipation in the face of the present environmental disaster is an affect widely shared by our generation. And ask ourselves why a certain atemporal anti-capitalism doesn’t succeed in resonating with this affect. We should maybe consider our contemporaries’ obsession with modifying their behaviors and individual lives not only as a variant of their obsession with the construction of their own personal identities, but also as the neoliberal disarming of a rage of which they’ve been dispossessed. To see the compulsive agitation around environmental concerns as not just another fashion, but as the system’s last chance for channeling a panic that traverses our generation. A panic that we feel too, even if, when we think about it for more than 15 seconds, we deal with it by telling ourselves that capitalism is the problem.

In any case, this panic doesn’t start the first time we learn whatever catastrophic statistics on climate change: it is felt, it circulates, it exists between us. The endless awareness campaigns targeting us don’t set it off: they pacify it. Because it’s indeed an unprecedented achievement in pacification that a generation that has been told since a very young age of the coming collapse of the world it inhabits is not already in armed struggle.

Their March 15th and ours shouldn’t prudently ignore one another. Because, you know, our infinite capacity for disinterest in what’s going on outside of our milieus maybe isn’t among our best qualities. Maybe, in fact, it’s interesting that mainstream environmentalism is seeing the possibility for a certain offensivity opened up (offensivity that of course exists already in land defense struggles and among radical environmentalists).

Guys! We really don’t want to be the 50 dumbasses just doing their annual March 15th demo, believing we’re experimenting with the actions of their civil war, and not even able to feel concerned by the fact that people who have never gone on strike have begun saying that the climate is a structural question. How about we admit that environmental concerns are one of the rare things right now that are pushing people to make changes in their lives. Perhaps we shouldn’t let this momentum pass us by completely, even if sometimes it seems driven solely by the winds of neoliberalism. We could work to return to it the conflictual dimension that should in all logic be its foundation.

The night of March 15th, we’ll be happy to find ourselves amongst one another. But we’ve got to remember that when something really goes down, we’re always the first to be surprised, so let’s keep on the lookout for what could surpass us.