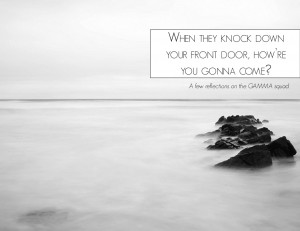 A few reflections on the GAMMA squad

Word on the street is, there’s a new police squad in Montreal called GAMMA – short for “Guet des activités et des mouvements marginaux et anarchistes” – whose goal is to investigate and repress anarchist and marginal movements. The following is a series of reflections on this development from a few anarchists. Needless to say, it’s not meant to be representative, but is rather our own analysis of this situation, and can hopefully stimulate some discussion amongst our various circles.

We understand the GAMMA squad to be a sign of the state adapting its strategy not only to an increasing amount of attacks against it, but also to a broader context of increasing austerity, and therefore of potential rebellions to come. Its ultimate goal, of course, is the maintenance of social control, necessary for the preservation of this system.

The new squad is part of the “Specialized Investigations” division of the SPVM, which is the umbrella group that has organized crime as one of its focuses. Taking a cue from how the police investigate street gangs, mafia, and the bikers, GAMMA has a mission to profile and accumulate information on the actions, interests, and lifestyles of people considered anarchist or marginal, and so specifically targets anyone who questions the dominant social order.

Why, then, a specialized squad to target anarchists? There are several reasons that we can think of. One the one hand, this is the state’s attempt at shaping the discourse around anarchist ideas and actions. By using the media to single out anarchists, the state tries to personify the anarchist as a dangerous terrorist and asks the population to become pre-emptive snitches in order to protect themselves from this supposed menace. An example of this sort of discourse put into practice is the citizen-snitches during and after the English riots this August, organizing vigilante squads, taking cell-phone photos, and calling in toll-free numbers to denounce the rioters. In casting the anarchist as “the dangerous other”, the specter of GAMMA hopes to draw a clear dividing line between those who are anarchists and will therefore be criminalized, and everyone else (who presumably doesn’t want to be criminalized) – a sort of classic divide and conquer, separate and box in. This is meant to discourage everyone else from getting any ideas about rebelling themselves, of identifying with the rebels, because they just may. Because in reality this line is a blurry one, and the desire to fight this social order is by no means unique to “the anarchists”, so in doing this the state is attempting to paint a line over already stormy, ever-shifting waters.

By creating a squad with this intention, the state is contributing to the maintenance of social control that capitalist society needs in order to function. In fact, it is physically impossible for the police to be everywhere at once – they can’t be everywhere all the time. They can try to get around this fact by installing all sorts of other technology of control – surveillance cameras on every corner, wiretapping phones, mapping out networks through facebook and twitter, store anti-theft detectors, ID cards, biometrics, collecting people’s DNA, x-ray machines at customs, flying drones over borders, the threat of prison – but the key element of social control is our own internalization of it, ie. the cop inside our head. It is the residue of the fear that they create. In the end, police squads like GAMMA accomplish as much through the ghost of their possible presence, as through their actual physical existence.

Of course, there is also a material logic to the creation of GAMMA. It appears to be a bureaucratic re-organization of police forces in order to more efficiently collect and process information about our struggles. They are focusing on anarchists and consolidating their databases to try to better understand patterns and draw links between distinct events.

Repression more broadly, and a rejection of the discourse of “rights”

GAMMA can only be understood by looking at the role repression plays more broadly. Repression has always been an integral part of the functioning of the state. Every state has at its foundation the monopoly on organized violence which it expresses through its laws, its police and its prisons. It therefore isn’t surprising to see the police trying to repress a struggle that has as its honest intention the total negation of the state.

Likewise, political profiling has always existed. Liberals like to boast about how we have freedom of speech, and that other one – freedom of thought. As long as ideas remain exclusively in the realm of just ideas, we have these “freedoms”. As soon as people start to put their ideas into practice, however, and when these challenge the dominant social order, repression suddenly makes itself felt and these freedoms fade into a quickly distant memory, echoed in the walls of the Toronto East detention centre, in Pinochet’s torture chambers, in the ruins of Warsaw, and in the sandy cemeteries of Afghanistan.

The rights that constitute this democratic state are compromises that are offered us in exchange for the maintenance of social peace (ie the absence of rebellion) and our obedience in the face of this system of misery. Within the discourse of rights is implicit the need for the police, the laws and the state to exist, to protect them. In reality, however, as soon as state power is threatened, rights rapidly disappear. To quell the uprisings in England, the government imposed a state of exception. Prime Minister Cameron ordered the police to use all the tools at their disposal in order to reestablish order – to do whatever it takes. The law was on their side. As soon as order was transgressed, democracy turned tyrannical. It started to look like scenes from a science fiction movie. The police symbolized the limits of the possible.

In our context, rights are often invoked in a moral way, a mythology to which people can refer to, the glorious constitution and such. We argue that rights are a concept that can, like all language, change its meaning, application, and intentions, and can be used or let go by the state depending on circumstances, as convenient. In building a serious struggle against the state, then, banking solely on our rights and throwing our lot in with that concept is a form of insanity. We need something else.

Democracy and fascism are two sides of the same coin, and it flips based on the social, political, geographic and economic context.

Repression in the austerity era

And the context is changing. We’re now full on in the era of austerity. Everywhere in the world, states are cutting their social and public sector policies, as well as their spending on public health, education, and social welfare. In order to deal with the current global financial crisis, the welfare state, established after the Second World War, is now being drawn back, with increasing privatization of whatever remains. By cutting social measures the State is also preparing to face the revolts of an increasing number of those exploited or excluded completely from the system, many of whose labor power has become redundant and who teeter around the service economy, trying to ink out a living. Austerity is the engine that is influencing the changing face and form that repression takes. Meanwhile, a real rage is simmering under this surface, and there are always those who chose to fight for freedom and for the destruction of this prison world that envelops us.

As anarchists, not only are we not surprised by these developments, but we refuse to hide behind the veil of justice to claim our innocence. What role does innocence play in a struggle anyway? For us, the courts are not the terrain of struggle on which we can win this war, even though we may have victories here and there. We refuse to use the discourse of the courts. In a world based on exploitation and misery, our desires for total freedom will always be criminal. The law’s main function is the maintenance of this system. Our struggle is against capital and the state in its entirety, and against all manifestations of this in our daily life, against the police and other forms and institutions that serve and reinforce the state’s power and control. As our struggles grow, develop, and intensify, it is not surprising that they will try to respond with greater repression.

How can we respond?

The question is, then, how do we respond? How many people hate this system? How many hide their rage, feeling isolated and alone? A world that needs prisons isn’t ours. Each pig is a symbol of rational domination over the body. Because we imagine a million other possible ways to live, and we have dreams, we refuse to bow our heads in front of the social order and its laws. Our power lies in the fact that we are not the only ones who are suffocating in this and who choose to fight it. The state’s control over our lives grows proportionally to the increase in people’s general sense of alienation. In the city, urban planning leads to a mapping of every inch of space, where there are less and less places to hide. Capital wages war on us by appropriating every centimeter of our space, every muscle of our bodies and the ideas in our heads. If we refuse to be colonized by this, we must find ways to fight it. We’ve made the choice to be in active conflict, together, in the face of this system rather than waiting in front of the television hoping that this system will collapse on its own. If the rioters of London, or those of the ghettos of Paris, or Egypt, or Greece, chose to take their lives into their own hands, we are surely capable of doing the same.

Now is the time to find each other as comrades in struggle, to self-organize. We need to create the things we want to see ourselves, because nobody will do it for us. We need to develop our practices in terms of communication, creativity, and conflictuality. The gap between ideas and action is really not that wide at all.

Now is also a time to work out our differences, and build a critical solidarity with each other, not letting the state tear us apart over petty conflicts. This doesn’t mean that we should erase our differences, or that we all have to work together, but we can still support each other.

Finally, we should be careful not to get cornered, or to get stuck in a war of attrition against the police. If we remain few, we will eventually lose. The repressive strategy of the Canadian state, similar to France, US, England and other dominant countries, is based on the theory of permanent counterinsurgency. This means that they must try to repress each social struggle in its infancy, before it has had a chance to grow or reach a certain critical mass.

Our greatest strength, then, is not our passion, nor our rage, nor even the sharpness of our revenge, but rather the possibility that our ideas and practices will spread to the powder keg that is this fragmented society.