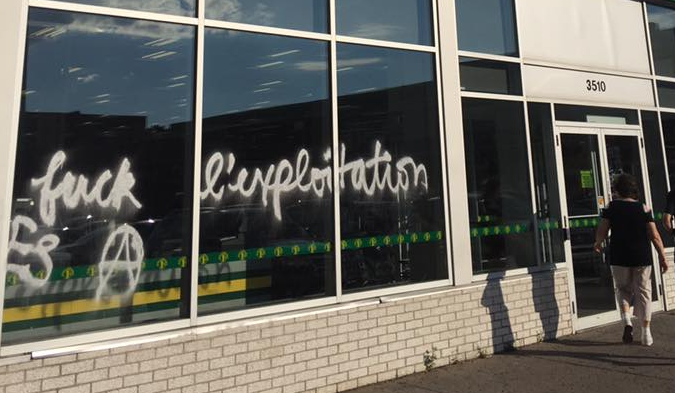 Last Tuesday, August 16, a widespread power failure plunged Hochelaga into darkness. No more light in the streets, no more functioning cameras… When we realized what was happening, we quickly exchanged knowing looks and smiled under the glow of candles. We gathered our rain jackets and several tools, then left to play in the night. The torrential rain had disrupted the stifling machine of the city and its system of surveillance. The storm offered us a respite, a moment of chaos to not be missed. Completely drenched, with joyous hearts, we strolled in the streets, improvising our targets with excitement. We took several precautions: planning an exit route for each location, and having lookouts. Darkness was our accomplice. We hurried to play until electricity returned, then headed to our homes without any problems.

We smashed the windows of three gentrifying stores : the restaurant Burrito Revolution and an e-cigarette store on Ontario, as well as the yuppie cafe Le dîner on Ste-Catherine.

We slashed the tires of two luxury cars.

We covered several spots in graffiti. On the Arhoma bakery, which has already been targeted by a similar action in the past, we wrote : On vous lâchera pas / Hochelag ≠ Plateau (We’re not gonna let you get away / Hochelag ≠ Plateau). On the Jean Coutu : Toi aussi tu fais partie du problème / Fuck ton empire (You’re also part of the problem / Fuck your empire). On the Dollorama : Fuck l’exploitation / Solidarité sans frontière (Fuck exploitation / Solidarity without borders). On the real-estate office Royal Lepage : On veut pas de vos condos (We don’t want your condos). We also redecorated all the cars in the car dealership on Ste-Catherine, where they plan to build 120 condos, using classics such as Pas bienvenus (Not welcome) or Mange ton bourg (Eat it, yuppie), but also funky inspirations like Spaghetti.

The next time that such an opportunity presents itself, we hope to run into you in the street!