We’ve made an ‘introduction to anarchism’ flyer, merging several texts by comrades from elsewhere. The flyer includes a list of local spaces and resources for anyone interested in anarchism in Montreal. For distribution at schools, workplaces, barricades, events, and demonstrations! 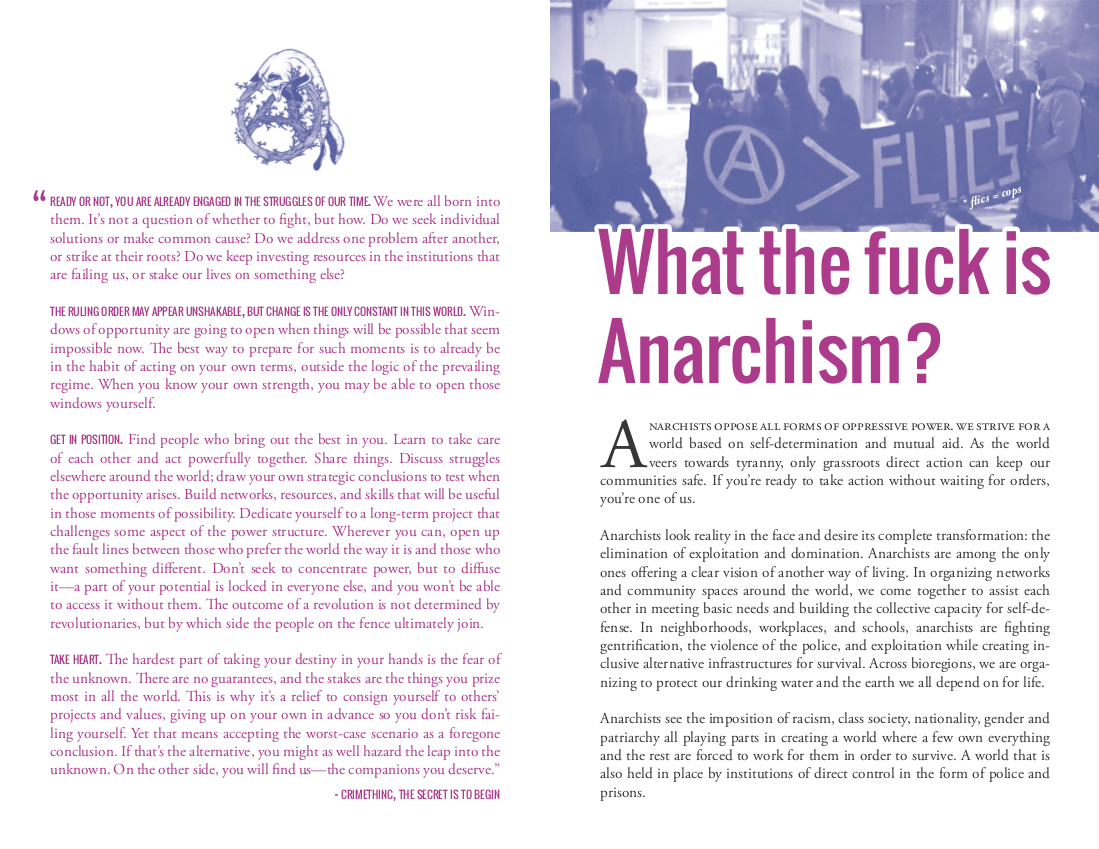 Anarchists oppose all forms of oppressive power. we strive for a world based on self-determination and mutual aid. As the world veers towards tyranny, only grassroots direct action can keep our communities safe. If you’re ready to take action without waiting for orders, you’re one of us.

Anarchists look reality in the face and desire its complete transformation: the elimination of exploitation and domination. Anarchists are among the only ones offering a clear vision of another way of living. In organizing networks and community spaces around the world, we come together to assist each other in meeting basic needs and building the collective capacity for self-defense. In neighborhoods, workplaces, and schools, anarchists are fighting gentrification, the violence of the police, and exploitation while creating inclusive alternative infrastructures for survival. Across bioregions, we are organizing to protect our drinking water and the earth we all depend on for life.

Anarchists see the imposition of racism, class society, nationality, gender and patriarchy all playing parts in creating a world where a few own everything and the rest are forced to work for them in order to survive. A world that is also held in place by institutions of direct control in the form of police and prisons.

Anarchists recognize the one-two punch of the right and left wings of the state. The right-handed uppercut of market capitalism and the strong left hook that more government offers have taken turns pummeling people and the earth for hundreds of years. Anarchists are those who have had enough of it all.

Naturally anarchists are decried as dangerous by cops, politicians, and the rich, and rightly so, because if anarchists had their way those roles would no longer exist. While we’re told to grow up, to quiet our rage, to check another ballot, wait another decade for change, our limbs and minds grow weary. Our dreams and desires yearn to overflow, for something different.

Anarchism means destroying the forces that seek to keep us on our knees, as much as it means finding your friends, lovers, families and communities to have each others’ backs, with unbounded rage and joy. The riot that spills into the streets with dancing and laughter, the potluck that leaves everyone fed, the social center filled with books and ideas, the friendships based in affinity and unconditional solidarity, the window smashed to let in the light from outside.

In a world full of alienation and apathy, anarchists are willing to act in accordance with their ideas. Anarchists are those who would set fire to a bulldozer or a new luxury home rather than let a forest be cut down, who would rather hear the sound of shattering glass than a politician’s speech. Deserting and disobeying all the rules written against us, by squatting and stealing for our survival, and rejecting the roles we’re assigned, as good worker, good student, good citizen, good woman or man. Rewriting the usual endings; by supporting prisoners rather than letting them disappear in isolation, by beating up rapists and homophobes rather than suffering their violence, by creating forms of love that only strengthen us rather than containing and limiting us. Taking control over our surroundings by painting graffiti on the walls or occupying space and planting gardens. By arming ourselves with the ability to create a new world and destroy the one that has been imposed on us.

Montreal Counter-information is a local website that publishes news and analysis about anarchist struggles in Montreal.

Visit resistancemontreal.org for a calendar of radical events in the city, and a larger list of anarchist groups, spaces, and news.

If you want to learn more about anarchism across North America, you can visit these (anglophone) websites: