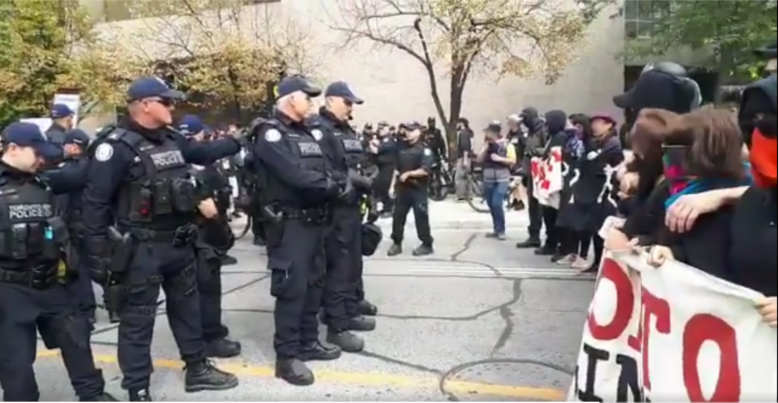 On August 8, the racist far-right group PEGIDA and their friends the Proud Boys, Soldiers of Odin, Northern Guard, and Canadian Combat Coalition got together for one of their now regular meetups and public displays of racism and Islamophobia. This time, it seemed they were particularly interested in using the upcoming anniversary of 9/11 to forward their anti-Muslim, anti-immigrant message. This is one individual’s report back on the day; ARC also has a good timeline and photos.

PEGIDA once again assembled on Armoury Street at University, with a rally planned to begin at 1:00. By 12:30 there were around 10 PEGIDA members, mostly of the angry-soccer-mom and your-racist-grandparent variety. Police had assembled several layers of barricades around their gathering. There was already a significant police presence, which increased throughout the day. At the time there were around 30 antifascist/antiracist demonstrators. Both groups’ numbers grew over the next few hours, though the racists’ unfortunately more so. The various far-right groups again used their tactic of showing up after counter-demonstrators were assembled, in groups ranging in size from around 5 to 20. While folks were aware of them coming from a distance, we didn’t have the numbers to go confront them before reaching the protest zone, so we focused on forming lines around the police pen and trying to block their entrance. Cops responded by forcing through the lines to open up an entrance. On a couple occasions this got pretty violent and resulted in one arrest of a counter-demonstrator.

The PEGIDA crowd was, by some observations, set back farther onto Armoury Street than previous times they’ve assembled there. For the first couple hours, counter-protesters stayed clustered around the police barricades, mostly along University and a bit down Armoury. The police presence, which was pretty high by then, ranged from bylaw officers to riot cops, all forming different parts of the human barricade surrounding PEGIDA’s rally and facing out at counter-demonstrators. It felt like, due to the fact that the groups were farther apart, there was a bit less direct back-and-forth/engagement with the racists, and that it was a bit harder to tell what was going on in their pen (at least from the University Avenue vantage point). It also felt like our chants (some of which got pretty inventive!) could be seen both as being shouted directly at the racists and some as more generic anti-hate messages, which isn’t a bad thing to be intentional about as we consider how much we’re trying to engage directly with those groups vs. people passing by and possibly engaging at these events.

Less than a block down the street, the environmental group 350 was holding a climate change rally. We got a bit of engagement from those folks on their way to the rally and on what turned out to be a slow trickle of a march down the sidewalk on their way to Queen’s Park later. Definitely not all, but a number of the passerby’s seemed supportive of our action, or stopped for a minute to ask questions. A few counter-demonstrators were prepared with flyers to hand out to folks passing by with some information on our action, though I didn’t get a chance to see these materials so can’t really comment on the content or how they were received.

Things got interesting around 2:30 when PEGIDA & co., and more police started concentrating around the eastern end of their Armoury pen (the side closer to Nathan Phillips Square). For a minute it was unclear whether they were getting ready to disperse or to march. Shortly after they left though, it became clear that they were marching, with the intent to lay a wreath “for the victims of 9/11” on the cenotaph in front of Old City Hall. This lead to what felt like a momentarily chaotic dispersal of our group in pursuit. A number of people took off east across Nathan Phillips Square, while other stayed closer to the group and (from what I understand) were able to slow down their march at a few points. A few minutes later, the racist groups (police included of course) were marching down Bay Street and a small group of us had assembled about a block down, quickly joined by the rest of our comrades. PEGIDA and co (by some estimates about 60-70 by that point), led a by a police escort, stopped a bit short of us, allowing more police to stream in around them.  Meanwhile our group assembled in a line (between 1-3 people deep at different points) across Bay Street. There were at most around 50 of us at that point. In a disgusting and unsurprising display of support for the racist groups, about 100 police were used to allow these groups to safely march. To be clear, police could have told those groups to disperse, but they didn’t, and allowed them to have their highly performative and outright display of hatred down a major street in the city.

We were informed that police would be allowing the march, and were ordered to clear a path. We stayed in place, linked arms, and used banners to form as solid a line as possible. This seemed like the last real chance to stop the march, because it was clear if that if they wanted to push through us they could, it was just a matter of the level of difficulty or inconvenience we could cause. Unfortunately numbers weren’t on our side, and the police lined up in a wedge formation and advanced into us. Maybe due to the size of our group, they didn’t bring out bikes or batons or any other real instruments (that I saw), but rather they just had the numbers to push us back in a hand-to-hand sort of manner. In some parts of the line this mostly looked like a slow walk back, with some resistance to police, as we tried to stay linked with those in the center, who were getting more violently shoved down the street and struck by police. At this point the goal seemed mostly to be to provide some resistance, and to stay together to stop anyone from being arrested.  We were slowly moved down Bay Street, with resistance every step of the way. While we were definitely outnumbered and not going to be able to stop the march, this display of unity, courage, and determined resistance was seriously beautiful and inspiring.

While our line held pretty well, police were able to break it at times, and two comrades were arrested. A number of others were able to be pulled back from police. Eventually, at Bay and Queen Street, the line broke and our group ran to reassemble on the steps of Old City Hall. Police were able to form enough of a barricade to allow the racists to lay their wreath, and shortly after, the groups dispersed. One more person was arrested at this point, seemingly for something that had happened earlier in the march, as they were basically snatched off the street as things were dying down (based on reports from some comrades who witnessed it). A few comrades took this opportunity to address the significant crowd of people who had stopped to watch at this point. They spoke about what had happened that day and why it should be of concern to everyone. I think they seized an important opportunity here – one thing that seemed clear from Saturday is that we need more people on our side; and that has to start somewhere. If even some of the people who stopped to enjoy the spectacle while we faced down police on Bay Street had felt compelled to step into the street, the day might have ended differently. There’s a variety of ways that could happen, and it’s definitely worth putting more thought into.

In total four people were arrested, and after things died down folks headed over to 52 Division for jail support. A few interesting things happened, including a cathartic moment where the shitty dollar store wreath the racists had used to advance their cause was reclaimed and torn to shreds, and a tense moment where around 7-8 smug Proud Boys and C3 types walked past our group (unsure if coincidentally or because they were looking for a fight). Things did escalate, mostly to yelling but also a few blows, before they left, I guess because…we were standing right in front of a police station. Folks stuck around into the evening, and all four were released by midnight, with charges. Given reflections from previous similar events around jail support, it felt good to see a good number of people there and communicating with legal support. As well, I was glad there were as many of us as there were when the proud boys came by, and that’s something to be careful of.

Overall, the number of people we had out really shaped what we were able to do that day in terms of concrete goals like confronting the racist groups on the street and stopping them from marching. Whether it was just an unlucky day in terms of people’s availability, an indication of the tactics people are interested in engaging in, or anything else, it’s worth talking about and working on. There’s also, always, space in this conversation to be clear on what our goals are in engaging in events like these, how and why we confront these groups, and how this relates to our wider goals for the world that we want to live in.

In the context of Saturday, there was lots to build on, and furthermore, it seemed like things went as well as they did because people have been showing up consistently and building skills and trust with each other. I’m inspired by the spirit, courage, and tactical skills that were shown that day, and look forward to conversations about how we can use them and build on them to make things really interesting.