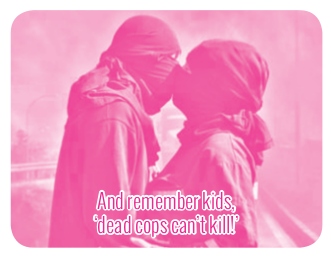 The following flyer was distributed during the Trans March of Pervers/Cité (the “radical queer pride”) which had its route approved by the SPVM:

In the last two weekends in Montreal, two of the summer’s bigger queer parties have been shut down by the police (July 18th Cousins and July 25th fundraiser party for perverse/cite). In the first case, a large number of filth conducted an operation against La Vitrola forcing the organizers to finish the party and violently dispersing partygoers – there were numerous beatings and several arrests. In the second case (perverse/cite), one car with two officers successfully ended the fun by threatening people with individual tickets; the response by queers at the party was dismal, lacked solidarity, and in the writers of this article’s opinion was ‘unqueer’ (we’ll explain what we mean by this later). Despite the efforts of some agitators to hand out face masks, the party was swiftly shut down and people drifted off into the night. These attacks by police are only one of many forms of violence against queers, but they are one of the most easy to fight back against since they are attacks on large groups of people; if we take collective action, we can resist and we can win. Below are some reasons why we cannot sit back and let these things happen, we hope they will encourage you to take a mask next time someone offers you one.

Premise 1: You have to take what you need by force.

Repression is nothing new to the queer community, but inaction in the face of State violence has never been and should not become the legacy of our milieu. From the historical battles of Compton’s Cafe riot and the Bash Back blocks at the Republican and Democrat conferences to the contemporary struggles of Washington DC’s ‘Check It’ “gang” and the so called “Gully Queens”, LGBTQ+ people have a rich history of self defense, collective action, and militant antagonism against the State and those who would commit violence against us. We should feel honored to have and obligated to defend this legacy. More than that though, we see in these struggles, riots, and defenses of space the acquisition by queers of greater protection, better material conditions and more fulfilled existences; without these struggles we would be even more vulnerable to violent transgressions, have less/no access to hormones, and would be unlikely to have a Queer Milieu to exist in. If we don’t continue to struggle against police incursions into our space, we will lose what little we do have.

Montreal’s queer community appears on paper to be committed to “anti-oppressive” politics and “safer space”; to this end, commitments towards changing our language, behaviors, and interactions with others are an important part of combating fucked up systems of oppression such as sexism, cisexism, trans-phobia, white supremacy, and classism, but personal behavioral changes cannot be the limit of our anti-oppressive politics. The gang known as the SPVM are one cornerstone of racist, classist, trans-phobic, and anti sexworker oppression within our city, maintaining social peace through violent repression, kidnap, murder, and theft. For many queers living here they pose a greater threat than someone getting our pronouns wrong or saying something trans-phobic. Especially if you are white, cis, middle class and/or not a sex worker, you have a duty to keep space safer by not letting the police enter, by refusing to allow them to interfere with events, and by actively interrupting their everyday activities. Standing quiet in the face of police attacks bolsters the arguments for “policing by consent”, makes individual police officers feel safer, and encourages cops to greater acts of violence against the most vulnerable people. To be anti-oppression means to be anti-the police; it might mean getting hurt or going to jail, but for many queers that’s already a reality whether they actively attack the police or not. If you leave a space as soon as the police arrive you are actively making that space more dangerous for other people. Sometimes you might decide that’s necessary for your own well-being, but most of the time it’s safer for everyone to stick together. It’s pretty hard for the pigs to arrest 200-300 party goes, but it’s easy for them to arrest 20-30.

Premise 3: Queer as a position of Social War ¹

Never mind getting drunk and dancing till your feet hurt, the raw joy experienced by fellow combatants in street conflicts with the police is something your dealer wishes they could market! If being queer is about forming new kinds of exciting, strange, and meaningful interactions and social relations, then what could be more interesting, exciting and strange than actively dismantling the State hand in hand with your new date/s; than breaking windows together, dancing atop a ruined cop car and running away into the night to make joyous criminal love. We don’t want to over-glamorize conflicts where friends get hurt, but fighting together and winning is one of the most exciting, joyous and liberating experiences these writers have ever had. Wouldn’t it be fun to chase the pigs off streets that belong to us and turn the whole fucking road into a queer dance party?

This communique was written by “The Angry Trans Mob”, we’re a crew of trans people from different backgrounds, struggles, and experiences who see the need for the expansion of conflict between Montreal’s queer milieu and the police/State/transphobes. We stand in solidarity with all those fighting to defend their communities (be those physical spaces/districts/towns or metaphysical ideas/identities/formations) from domination, attack, and destruction regardless of the weapons they choose to employ. We hope this communique inspires others to action.

1) Social war refers to the conflicts waged everyday against our bodies by capitalism, the State, and the police, as well as by our friends, families, lovers, and ourselves. It is a way of describing the violence of all existing paradigms of reality/social relations and the struggles to change or destroy them. Positions within social war are constantly shifting insofar as individuals constantly, simultaneously and interchangeably embody the roles of oppressor and oppressed. Lines of conflict are drawn throughout physical and immaterial reality, and manifest as everything from the moment a doctor decides the gender of a newborn baby, to throwing bricks through the windows of a bank, to even the project of constructing the “human” subject.

Some Clarifications, thoughts, and rebuttals

▼ When we talk of fighting, we want to clarify we don’t think of fighting as inherently violent (not that we oppose violence) or necessarily as taking violent action (which we support). We think of fighting as anything from non-compliance, to staying close and solidaritous to prevent targeted arrests, to molotoving a police car; we don’t think everyone should be prepared to do all of those things but we do think people should be prepared to support and enable them.

▼ Space for us is not just a particular party or event, space extends physically and immaterially around and along any line that people call queer, from personal identity to physical locations. The milieu is a “space”; to this end we think that many “spaces” can occupy one location e.g. When defending a certain party from police incursion one is defending both the location and space of the party, but also queer space as concept, and milieu space as a formation. For these reasons, we think that the defense of every and any queer location (be that cousins, the queer book-fair, a sex party, etc.) is essential in order to maintain the concept of queer space which acts as a safety net for some of those most targeted by repression. An attack against a queer party is an attack against queerness; if enough parties are shut down the amount of space queerness occupies will be reduced.

▼ We are against the discourse that certain Diasporas of people cannot engage in conflict because of oppressions they experience or dangers that they face. While we completely support any individual who feels they cannot engage due to issues of status, race, class, gender, etc., we think that narratives such “certain people can’t do x…” are often infantilizing, untrue, and patronizing. While we should never expect anyone to be prepared to act in a certain way (unless they want to), we should not presuppose people’s abilities for them; all over the world people in precarious situations struggle (often illegally) despite the cost that they might incur. It is just as true to say, for instance, that a demonstration which has been approved with the police is likely to make people feel unsafe as one that is declared illegal – if you don’t know people’s personal histories, you don’t know whether seeing demonstration organizers collaborate with police might feel more unsafe than being at an illegal demonstration. Moreover, collaborating with the police because a demonstration is not likely to do illegal things or to make certain people feel safer may further isolate people whose lives and existences are inherently illegalized. The hierarchies of danger established by the milieu should be constantly contested and debated.

▼ We reject the idea that violent resistance is inherently and exclusively white and male; we think this position is often used to delegitimize tactics that don’t fit into certain people’s ideas of acceptability and is sexist and trans-misogynistic as well as historically inaccurate.

▼ Although we firmly support self-identification, we reject postmodernism and the idea that anything can be called queer. We believe that queer is a positionality connected to other positionalites (such as race or class) and that there are certain limitations to what and who can be considered queer (just as a cis person cannot be trans, and a self identified trans person cannot be cis). For example, we think that a police office cannot be queer, because the role that they take in enforcing existing gender paradigms is contra queerness. 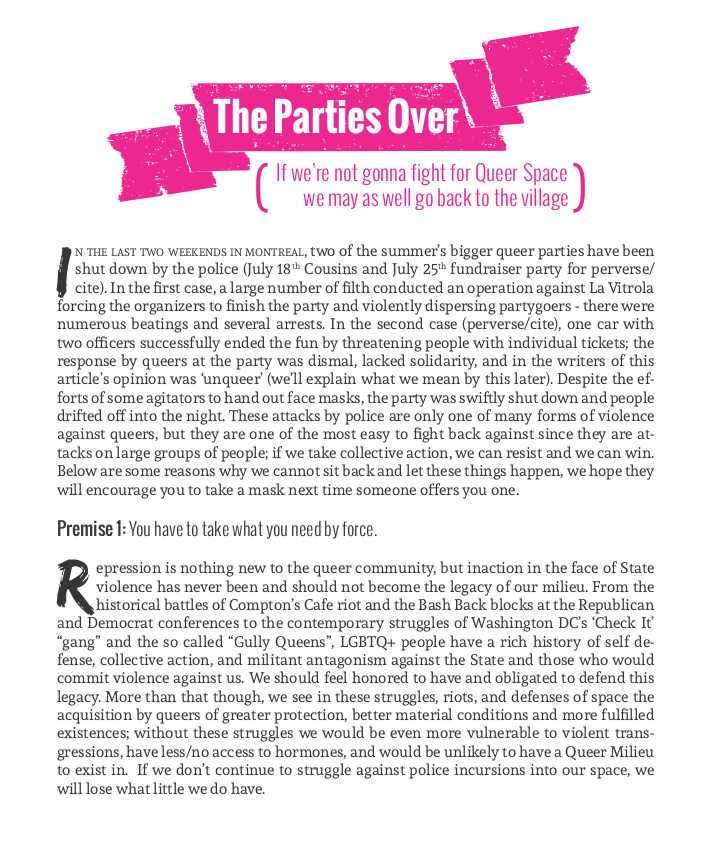