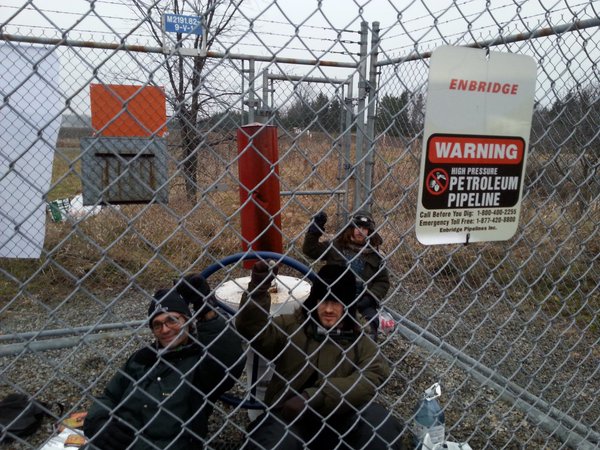 After a years-long, hard-fought campaign against Line 9, which employed a diversity of tactics, from lobbying to legal battles to direct action, Line 9 transported crude to a refinery in Montreal on December 3, 2015.

On December 7, we shut it down. Literally. Most media reported that Enbridge shut down Line 9 as a “precautionary measure”, but we know better. We closed the valve manually. This is historic: to our knowledge, this is the first time that activists have manually shut down a pipeline. Who would have thought that it be so simple?

The day of the action, Enbridge stock plunged 8 percent. For a company worth almost 60 Billion dollars, that`s about 4.8 Billion dollars. Take that, ya malignant scum!

There is a definite sense of exuberance following this action. One of the notable successes is how this action, which many people would consider radical, enjoyed broad support. This lockdown was organized by anarchists, but was publicly supported by citizens’ groups, including the ex-mayor of the town where it took place.

This whole action was a test of Canada`s new anti-terrorism law C-51, which expands the definition of terrorism to include tampering with critical infrastructure, specifically naming pipelines. Our line of thinking was this: If they charged us with terrorism, what they’d be saying is that a large segment of the population supports terrorism, and the state would lose the usefulness of the terrorism label to demonize an isolated political element. It wouldn’t be in their interests, but it would be good for our movement, since in all likelihood, once C-51 is tested in court it will (eventually) get thrown out as unconstitutional.

And the sooner that happens, the better. So get out there and start pushing the envelope, comrades!

There is a general sense that this action has breathed new life into the anti-Line 9 campaign, which NGOs long ago abandoned as unwinnable. For the first time in a long while, activists are expressing optimism that Line 9 can be shut down before it spills. We’ve arrived at a critical juncture, and the time for bold direct action has come.

In the aim of spreading accurate, in-depth information about this action, we present to you the most detailed account of events yet available. It is our hope that this inspires you beloved outlaws out there to start plotting.

6:15 a.m. First affinity group arrives at site. They unload supplies from vehicles and move them off-site.

6:45 a.m. Jean Leger calls Enbridge emergency number and tells them that he is closing the valve. This is filmed by a co-conspirator journalist. The whole valve and the ground starts vibrating. To avoid a potential explosion, the valve is opened slightly. The ground continues to vibrate, and sound of pressurized flow is audible.

7:30 – Patricia Domingos, ex-mayor of Sainte-Justine-de-Newton shows up on scene. She has been very active in the fight against Enbridge for over three years, and she is completely delighted about what is happening. For the rest of the day, she acts as spokesperson. Because Enbridge has still not showed up, she calls the Enbridge emergency number  a second time. Incredibly, she can`t reach someone who speaks French. Enbridge takes her name and number and tells her they`ll call her back.

8:24 Ontario Provincial Police show up on scene. Hilariously, they have no idea what is going on, they were just showing up to tell someone to move their car, which was parked in a church parking lot. When they figure out what`s going on, they express their gladness that the valve is on the Quebec side, hence not their problem. They leave the scene.

Approx. 8:30 – Second affinity group (larger than the first) shows up on scene and begins setting up tents, hanging banners, filming, tweeting, and being an awesome support team.

Approx. 8:45 – A francophone Enbridge employee calls Mme. Domingos and finally, they get the message. They tell her that the pipeline isn`t closed, that everything`s showing up as normal on their monitoring system. Take a second to think about that – what does that say about their much-hyped high-tech security measures?

Approx. 9:00 – Activists unlock and the valve is firmly closed. The vibration reaches a fever pitch, but once the valve is wrenched as far as humanly possible to the right, the vibration stops altogether. Activists lock back onto the valve.

13:53 – “Specialist“ team arrives on scene. Whatever they`re specialists in, it sure as fuck ain`t cutting locks. The next few hours are a comedy doing nothing to disprove stereotypes about the intelligence of cops (or lack thereof).

14:22 – SQ establishes perimeter, tells media to go to the road. Media leave initially, but are back minutes later, and continue to film at close distance for the rest of the day. The crowd of supporters also remains close at hand, maintaining and unruly and bold presence throughout the action. No supporters were arrested.

Around this same time, the two activists locked to the valve super-glue their locks shut. From this moment on, they no longer have any ability to unlock themselves. People begin to sing, and the sun comes out.

The activist locked to the fence is arrested, to raucous cheering, singing, and chanting. He is taken into custody and released about an hour and a half later.

When attempting to handcuff one of the activists locked to the valve, another valve that is part of the infrastructure sprays oils all over the place. All hell breaks loose at this point. One woman rushes towards the cage and is knocked down by cops. The intensity of the crowd reaches a fever pitch. The cops seem genuinely scared at this point, as they suddenly realize that they`re in a potentially explosive situation.

Crowd begins chanting for paramedics and firefighters to be brought to the scene, taunting the police for their incompetence. Police stop trying to extract the two people still locked down, and the jubilant crowd breaks into song, which continues for a long time. This is the energetic high point of an already awesome day.

Approx. 16:00 or 16:30 – Firefighters arrive with a whole bunch of heavy-duty equipment and break the valve, hauling the two remaining activists away with reinforced U-locks still on their necks.

Speaking as a participant, this action was definitely a high point in my activism career. The support was absolutely incredible, the solidarity expressed through song and action was beyond beautiful, and everything about the entire day seemed to unroll according to the benevolent whims of some trickster god.

So there you have it: Enbridge`s secret is out. Shutting down pipelines is easy, and their security is woefully inadequate to prevent either direct action or disastrous spills.

For that reason, it’s appropriate here to temper this glee with a sober dose of reality: Enbridge`s Line 9 is currently active, and recent actions have shown that we have even more cause than before to be concerned about the very real prospect of an immanent spill. We can also be damn sure that any spill that does occur will be poorly managed. All the more reason to intensify our organizing.

Also, we can expect that industry pigs, their political boot-lickers, and their police peons are now having emergency meetings about how to neutralize our movement. It would be wise to prepare for a wave of repression and infiltration, though it’s hard to imagine them slowing the momentum of our movement at this point.

Lastly, the three activists who were arrested were charged with mischief, trespassing (breaking and entering), and obstruction. They plan to aggressively fight the charges, and given the staggering amount of witnesses and evidence, it could be a long time before they get to trial. They’ll have raise funds because one of them, the C-51-defying, tactic-pioneering badass Jean Leger, isn’t eligible for legal aid. All
this to say: don’t forget about your comrades!

And may the words that were chanted throughout the day resonate with you, dear reader, as they will resonate in my heart for the rest of my days.

(translation: WE`RE NOT GIVING UP!)