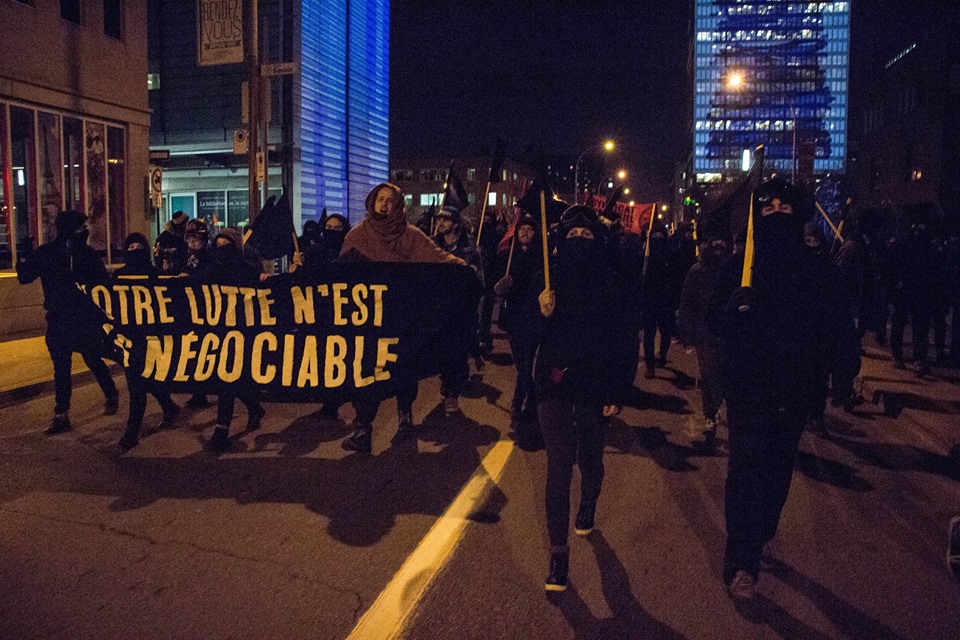 On the night of Wednesday December 9, a demonstration against austerity took the streets of Montreal, under the banner “Our Struggle Is Not Negotiable“. Québec’s public sector had held a general strike earlier the same day, and some union leaders have been supporting mobilizations on a scale not seen for decades in an effort to increase their bargaining power.

The callout read: We won’t let ourselves be pacified by a sell-out agreement or by a special law. To the front: our struggle is non-negotiable, we won’t back down. The night of December 9th, let’s retake the street. Let’s warm the city with our footsteps and our shouts!

A week earlier, during the night demo of November 30th, a smaller-but-determined bloc had smashed a cop car immediately upon taking the street, entering into a fifteen-minute battle with riot police who were hitting people with batons and plastic bullets at the intersection of Sainte-Catherine street and Bleury street. The successes of the 30th helped provide momentum for the 9th, and the tension and excitement were palpable as participants began to gather at Berri Square. 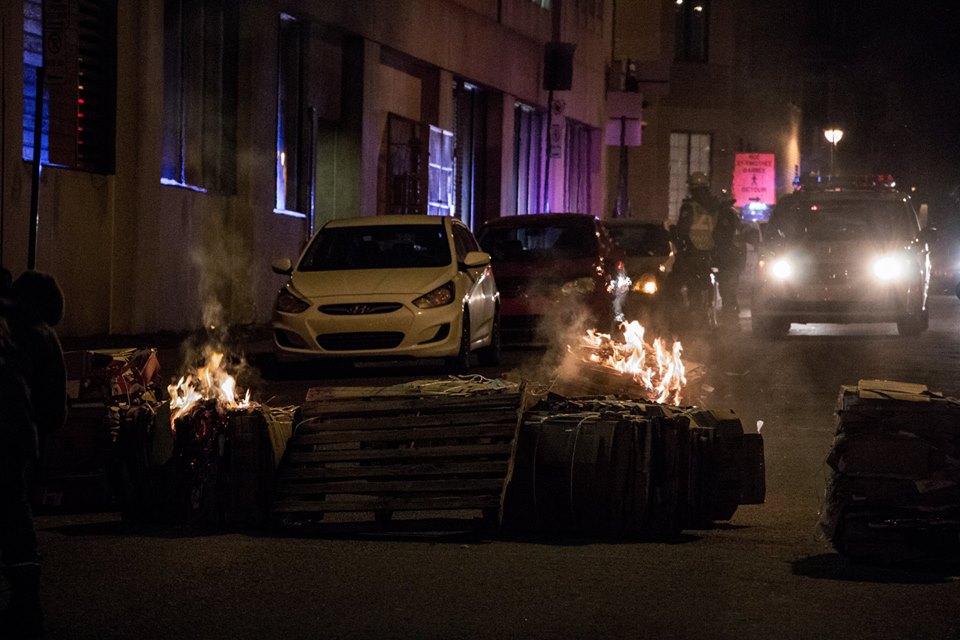 A few dozen black flags were distributed throughout the burgeoning crowd. Upon taking the street and heading west on Maisonneuve avenue, those who were not masked from the get-go began to cover themselves up. Within minutes, most participants in the 200-person demonstration had concealed their identities, forming potentially the largest black bloc in Montreal since 2012. Our enemies in the mass media didn’t even try to frame the destruction that unfolded as the work of outside agitators as they often do; the bloc was undeniably constitutive of the entire demo.

Early on, half a dozen people swarmed an obnoxious Québécois nationalist who shows up to nearly every demo and snatched away his Québec flag and sign, punching him in the throat when he tried to hold on to his props.

Ten minutes into the demonstration, riot police formed a line to our front and right, at the intersection of Maisonneuve avenue and Saint-Dominique street, trying to funnel us south where they were preparing the same maneuver at Sainte-Dominique street and Sainte-Catherine street. Their strategy was clear: to contain us in the Quartier Latin and away from the prime targets in and around the business district, including the police headquarters. The crowd had the collective intelligence to not let the police determine our route, and reversed upon itself, heading east on Maisonneuve avenue. Masked groups were seen sharing rocks, and the crowd darted south through a parking lot and housing project courtyard to get onto Sainte-Catherine street, where the police had not had time to form new lines to restrict our movement.

What followed was a half hour of riotous cat-and-mouse in which the crowd stayed one step ahead of police control. A group of six bike police on Sainte-Catherine street who were naively approaching to flank the demonstration were attacked with a hail of rocks. Surges of excitement were felt in the crowd as the cops were struck with fear along with projectiles, and rapidly fled east out of view. It was on.

The demonstration made a sprint toward René-Lévesque Boulevard, while those further back chanted calls to stay close together. The demonstration took up all six lanes on René-Lévesque, and looking around, our capacity for destruction appeared significant. The semi-armored units with plastic-bullet guns that typically march along each side of the demo were nowhere to be seen, having been blind-sided with volleys of rocks to the back of the head during the demo the week before. For a breathless twenty-minute stretch, the demo acted as a grand criminal conspiracy. Hammers, flag poles, rocks, and the removable metal garbage canisters on every street corner were used to smash the windows of Citizenship & Immigration Canada, construction conglomerate and defense contractor SNC-Lavelin, several banks, and other buildings. For a festive touch, people also wrecked the Christmas decorations assembled at office building entrances, and overturned SNC-Lavelin’s Christmas tree. A few participants ran ahead and broke the back window of a police van with rocks, while others shot off some very large fireworks at the remaining vans positioned in front of the demo. Cheers erupted with the sound of every shattered window. Unknown accomplices could be seen searching for and sharing projectiles; when the demo passed a construction site, comrades ran ahead to find any materials that could be pillaged, and were successful in breaking up decorative stones along René-Lévesque into throwable chunks.

Police began shooting tear gas while trailing the demo to the east on René-Lévesque, using guns that can fire each canister more than a block. At first, it wasn’t successful in dispersing the demo because the crowd just moved west faster while staying relatively tight. The demonstration began to head north on University, smashing yet another Bank of Montreal window as it passed by. The demo split when faced with a cop car blocking a smaller street, but quickly managed to regroup with itself and responded by howling joyfully. At this point, the police continued to fire tear gas and the crowd had thinned to around 50 people. People began to disperse to the surrounding streets, while groups of police and vans continued to harass small groups of demonstrators walking along the sidewalks back to Berri Square. The Media reported one arrest of a minor for obstructing police work, but no charges related to the mayhem.

Against one of the largest and most experienced riot policing squads in North America, those who took the streets on Wednesday decidedly swung the balance of forces in our favor, at least briefly.

We felt moved to write a reportback because we see a lot of potential in the determination and preparedness of the crowd, and have some further thoughts for how we might expand the scope of these moments, both quantitatively and qualitatively. For now, we offer a few notes on tactics which could expand the time and space of combative demonstrations. Ultimately, though, we want to escape the pattern of being successfully fought out of the streets after smashing a few windows and break with this routine of containment.

These ideas mean little on paper, but we look forward to the possibility of elaborating them together in the streets. Our hearts are warmed by the sparks that constitute our history of collective revolts, and the potential for these sparks to catch, because we desire nothing less than a city in ruins. 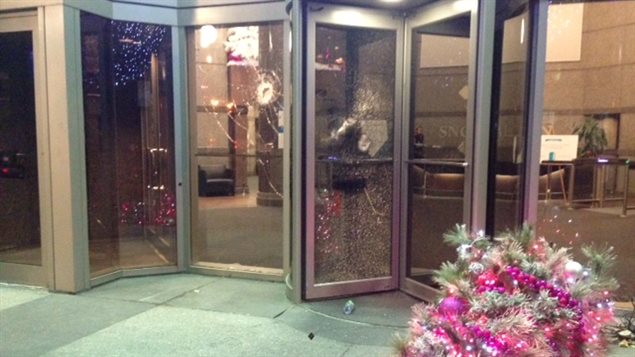