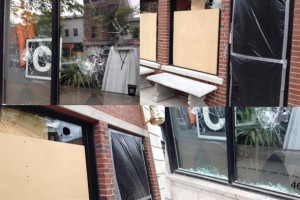 In a brazen attempt to vandalize several businesses at around midnight on Saturday, a group of individuals wearing ski masks broke the windows of four businesses located on Notre-Dame Street in St-Henri.

Dressed all in black, the vandals damaged storefronts as seen in a security video obtained by Global News.

The damage to Jesse Bowden’s shop, Campanelli, was just shy of $8000 in glass alone.

“We’ve never seen or witnessed a group like this, at this time, with so many witnesses, with weapons running en masse in the middle of the street, this isn’t a war zone” says the concerned business owner.

There is speculation that this is a result of growing anti-gentrification sentiment from some people in the community.

According to another local business owner, Corey Shapiro, “It’s no longer vandalism, it’s causing terror to people who live in the area.”

Two of his businesses were attacked over the weekend, businesses he says help the neighbourhood to thrive.

This is not the first time attacks like this have happened in the area.

According to a barber named Thaddeus who works at Shapiro’s barbershop, “We’ve been , and the night before, there was an incident outside Juicyyy lab, so obviously there’s a bunch of people who don’t like what were doing.”

Police are investigating after at least eight stores in St-Henri were vandalized at 11:30 p.m Saturday night as a group of masked individuals wearing hoods went on a violent destructive rampage on Notre Dame St. W. near Delinelle St. in the Southwest borough.

The masked vandals came equipped to smash windows. “There were about 10 guys all dressed in black and they came with pool balls and crow bars and broke the windows and 30 minutes later everything was broken everywhere,” said Vincent Powell.

Several witnesses called 9-1-1, but when the suspects fled the scene before police arrived.

The Saturday night attacks came one night after an opening night party for a juice bar was targeted by what appeared to be the same attackers. Entrepreneur Corey Shapiro said that smoke bombs were tossed into his newly-opened juice bar Friday. When he went out to look at what was going on, he was hit in the face by pepper spray. 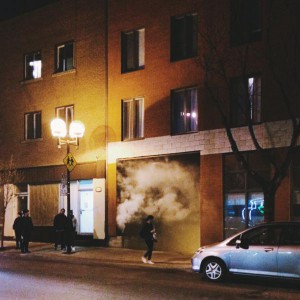 “I ran outside to see what the story was and I got pepper sprayed by people dressed all in black with masks, who had made a strategic attack on a crowd of a couple of hundred people,” he said. “This was an attack potentially endangering people’s lives.”

Jesse Bowden, who is a co-owner of the Campanelli boutique, was on hand Sunday evaluating the damage. He told CTV Montreal that there has been a history of such attacks on the strip.

“They came through about eight months ago spray painting the whole front of the storeface and a group then put out a manifesto on a website saying it was a politically motivated attack to stop the gentrification of this neighbourhood. These are people who are unhappy with the neighbourhood has changed, but the people that are changing it are all from this neighbourhood,” he said.

Business owners in St-Henri are calling on the city of Montreal to take action to stop what some are calling an organized campaign of anti-gentrification “terrorism” in the Sud-Ouest borough neighbourhood.

For several months now, graffiti denouncing gentrification has been appearing on walls and windows of businesses along a stretch of Notre-Dame St. W., a formerly rundown area that has been attracting business catering to higher income residents in recent years.

Last Friday evening, several masked individuals dressed all in black threw a smoke bomb into a crowd celebrating the opening of a high-end juice bar on Notre-Dame St. W. near St-Philippe St. One member of the group also pepper-sprayed the owner of that business, Corey Shapiro, in the face.

And early Sunday, a similarly dressed group was seen breaking windows of several businesses along Notre-Dame St. W. with crowbars and billiard balls. The vandalism was witnessed by many, as it happened shortly after midnight, when bar and restaurant patrons were still out in numbers.

“I’m asking people to stop,” Shapiro said in an interview with the Montreal Gazette on Tuesday. “I’m asking the city to come in and to stop this. It is no longer vandalism. It is terrorism. Somebody is terrorizing the neighbourhood.”

Montreal police say it is too early to say whether the two incidents are linked, but police spokesperson Sgt. Raphaël Bergeron acknowledged there have been a number of similar incidents in that area in recent months.

New condominiums along the Lachine Canal and the opening of the nearby Glen site of the McGill University Health Centre have been attracting wealthier residents to the area in recent years, and not everyone is happy about it.

In an anonymous article posted last November in anarchistnews.org — a website that describes itself as a non-sectarian source for news about and of concern to anarchists — “some anarchists” claimed responsibility for vandalizing several new businesses along Notre-Dame St. W.

The article describes with derision the “new foodie restaurants, high-end boutiques, art galleries and ‘drinkeries’ catering to the residents of all the canal-side condos, replacing the dollar stores and flea markets.” The post goes on to say, “we decided to render some of our disgust with gentrification by vandalizing two such examples with fire extinguishers filled with paint.”

One of those businesses named as targets in the post was Shapiro’s barbershop, Notorious, and another was Campanelli, a coffee shop and clothing boutique. Both were again attacked in last weekend’s vandalism, along with other nearby businesses.

Shapiro also owns an eyewear store called Vintage Frames Company on Notre-Dame St. W. and a half-dozen modest residential properties in St-Henri. But he says he is not in the business of pushing anyone out of the neighbourhood.

He said most of the people in the neighbourhood are happy to see new businesses.

Shapiro admits he may be a particular target for criticism from anti-gentrification activists because he wears gold chains and drives a gold BMW. He says he got the car for free in a marketing deal with BMW and the gold theme runs through his businesses, but he is “not a rich man.”

He seems frustrated when asked how he proposes that the city solve the problem. He is a businessman who deals in eyewear, juice and hair, not a politician, he says.

“I don’t have the solution because this is not my forté. I mean, if the mayor comes to me and says that to solve this problem, he needs a powerful pair of glasses, I’m your guy. Or if he feels he needs a boost in the morning, I got him on the juice. Or if he feels people don’t like him or don’t take him seriously because he has a bad haircut, I’m the guy to cut his hair. But I’m not the guy to plan or tell anybody how to fix this.”

The mayor of the Sud-Ouest borough, Benoit Dorais, said he is already working on some potential solutions. First, he condemned the vandalism publicly and asked Montreal police to increase their surveillance of the St-Henri area.

But he also acknowledged that there is some resentment of the neighbourhood’s new, middle and upper-middle class residents and the businesses that cater to them.

More than half of the Sud-Ouest borough’s residents still live on incomes that fall under the poverty line, he said, and businesses that cater to that clientele are not actually being pushed out.