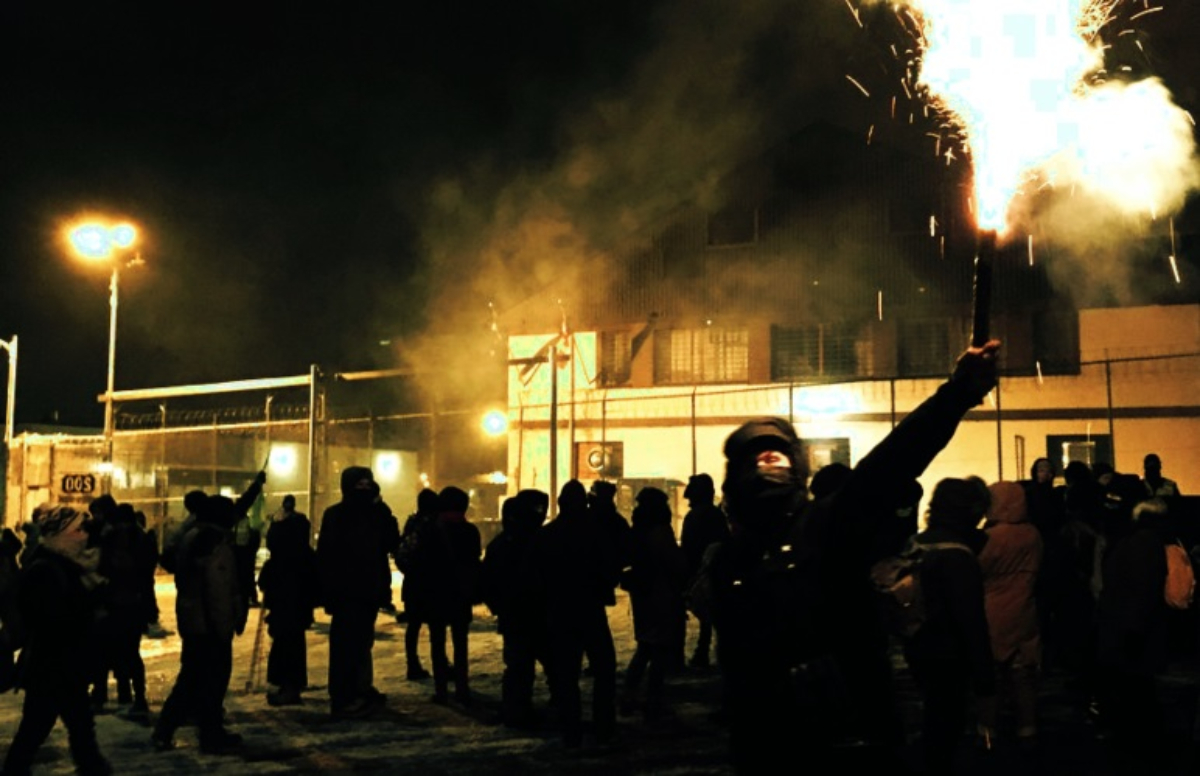 On New Years Eve 2018, a crowd of around 150 people gathered near Henri Bourassa Metro on the island of Montreal to take three school busses out to Laval, Quebec. Every year since 2014, and intermittently in the years prior to 2014, people gather outside prisons in the Montreal area to set off fireworks, wish people in prison a Happy New Year, and show our opposition to prisons, borders, and the industries and governments that sustain them.

After a brief bus ride, we stood together outside our first stop, the Federal Training Centre’s Minimum Security prison at 600 rue Montée Saint-Francois. Stretched out along Montée Saint-Francois with nothing but a regular chain link fence separating the living units from the road, the Federal Training Centre Minimum is the only stop on our route where we can see people’s faces in the windows. This year was no exception. Dozens of people stood in their cell windows waving and shouting back to us as we set off fireworks, played music, and yelled greetings. We showed off our banner, which read “Happy New Year! Free all prisoners!” and chanted “Pour une monde sans patrons, ni flics, ni prisons!” (For a world without bosses, cops, or prisons).

Our second stop was at Leclerc, a provincial prison for women. This year we were able to get closer to the gates than last year and after setting off fireworks and blasting music, we noticed lights flickering on and off in the windows of the prison! This prison is set far back from the road and we were excited to know that people inside could hear us and see us. Leclerc has been denounced over the years for having horrendous conditions, most recently in early December 2018 by a coalition of groups in Quebec. The cells are so cold that prisoners have to sleep with their coats on and the water is undrinkable. While we wouldn’t settle for nicer prisons in our fight for a better world, we think it’s horrible that prisoners in Leclerc have to deal with such shitty conditions!

Next we stopped at the construction site for the new migrant prison that is currently being built. We pointed out the construction site to the crowd and filled them in on the plans for the new prison. Overseen by architecture and engineering firms Lemay and Groupe A, the new migrant prison is part of a government overhaul to spiff up the deportation machine. The government claims the new building will have a warm wood interior and be designed to “not feel like a prison” despite plans for just as many security cameras and fences as one would expect. We think these plans are all bullshit and fully expect the new prison to turn out the same as the regional federal prisons for women built in the 90s and 00s with high security units, cameras everywhere, and no budget left for programming because the security costs ran so high. That is, if we don’t manage to stop the construction first! 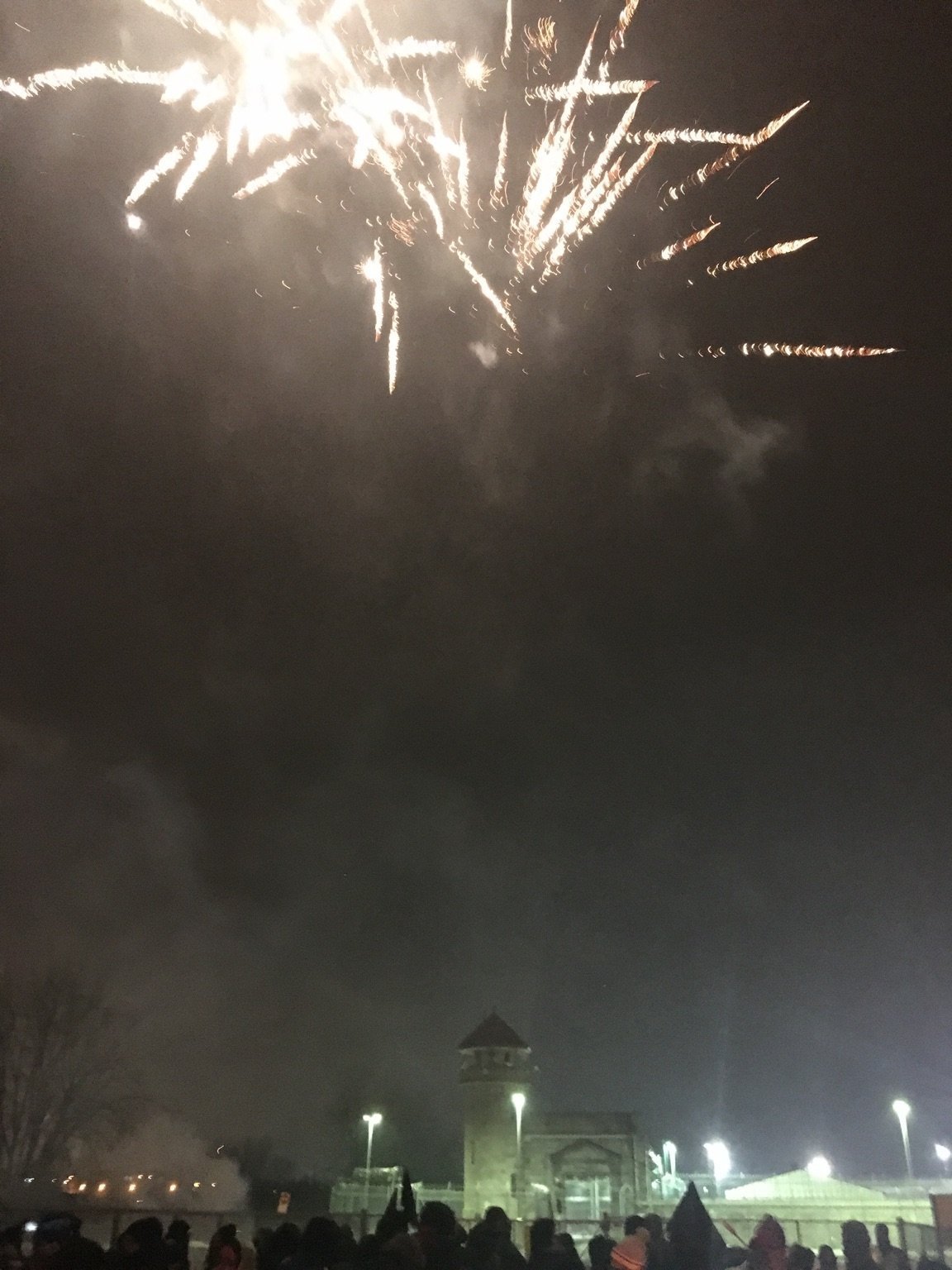 Then we walked up the road to the migrant prison that is currently in operation. We set off fireworks and shouted to folks (including the kids!) inside. Some drummers in the crowd kept a good beat going. The MC’s reminded us of the hunger strike against the government’s “alternatives to detention” plan that imprisoned migrants in Ontario carried out in September of this year. This plan includes introducing an electronic monitoring program and contracting the John Howard Society and the Salvation Army to create “parole-type” programs for migrants. We think it’s all a way to control and monitor more and more migrants who come to this country, who are often fleeing situations of violence that Canadian imperialism helped create. Shame on the John Howard Society and the Salvation Army for taking these contracts! And fuck the government’s plan to increase deportations by 30% in the coming years! For a world without borders or prisons!

Our fifth stop was at the Federal Training Centre – Multi level. This prison has a wall and two fences around it, so it’s always hard for us to get close and always hard to tell if anyone inside can see or hear us at all. Despite that, we set off fireworks and shouted to folks inside. Our sound system battery had died by this point, so we meant to read out a statement from our imprisoned friend Cedar in Ontario, but didn’t have the lung power to do it with no sound system. Solidarity to Cedar and everyone else who has to spend this holiday behind bars! We’re thinking of you all and fighting to make it so no one ever has to spend New Years inside!

Finally, we walked back up the road to pass the Federal Training Centre Minimum one last time and say our goodbyes. On this second trip by the prison, a few people had come out of the buildings to stand in the yard despite the cold and they waved and yelled to us from across the fence and line of cops. A hearty fuck you to the cops who insist on standing between us. Some folks in the crowd sang the Helicopter Song and tried to teach everyone some new lyrics to Ke$ha’s We R Who We R. We set off the last of our fireworks and headed to the buses.

This New Years Eve Noise Demo tradition feels super important to us! Thanks to everyone who came out, we were thrilled with the number of people that showed up this year. Solidarity to folks inside fighting the system from in there!