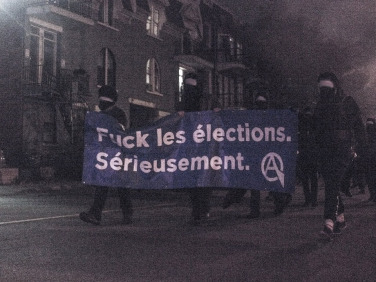 Late on election night, dozens of black flags lined the streets just south of Lafontaine park. Discarded in the midst of an altercation with riot police who shot canisters at us, broke us up, and temporarily shattered our togetherness, they remained, at least momentarily, scattered across the pavement, there to mark our passage. A passage too short. A passage not nearly close to sweet.

The demo began around 10pm. The lighting of a pink smoke grenade marked the beginning of what was going to be a brief but fiery display of resistance. Fireworks splintered and splattered, dying out among the trees. Cops had been roaming around since the beginning of the banquet, at times hiding behind their unmarked vehicles, but for the most part, staring at us from a distance, as if trying to locate the one transgression, infraction, crime, that would later serve as a justification for the barrels of tear gas they were preparing to unload on us.

As we made our way south bound, a woman exiting the Notre-Dame Hospital tripped and fell. Almost immediately, a dozen or so comrades stopped to offer her a hand. They didn’t know how to help her. And with riot cops charging at us from behind, they knew that they couldn’t offer her anything beyond their awkward, split-second presence. Flaming tear gas cans filled Plessis street and the hospital parking lot. Some of us ran south-east, cutting through that very same parking lot as if avoiding the Wrath. But it was too late. Our stones had landed. Their precious patrol cars had already been dented, their aggressive, obnoxious machismo irreversibly mollified. Others continued down Plessis, smashed a Desjardins bank, and, dwindling in number, stumbled upon the PQ’s Election Night gathering at Usine C where they delivered a brief fuck-you to the bourgeois elements assembled there before needing to escape increasingly confident police charges, dispersing through parks, backyards and alleyways.

The dents we left behind and the flags that we were forced to abandon only minutes into the protest have earmarked your world for destruction. Our dents, our black fabric strewn across your peaceful city roads harbour a world diametrically opposed to yours—a world impatiently awaiting the moment of its revolutionary release, a world no riot cop, no corporate chemical canister will ever be able to contain. A world reviled by even the thought of being asked to elect rulers.

A world in which unaccountable elites are replaced with temporary, revocable assignments open to all. A world in which we would loathe to abandon our decision-making powers to wealthy ‘socialist’ upper-class poster boys who see fit to plaster their unblemished faces on our street corners, choosing instead to safeguard them jealously against those who, under the guise of development and progress—always development and progress—are oh-so-ready to usurp what is rightfully ours, eager and willing to act on behalf of their nameless masses. Wealthy upper-class poster boys who on this very night (October 1st) and for the next four years will greedily suckle champagne from the teats of stingy, blood-thirsty Capital while the rest of us are peacefully tear-gassed.

Starting today, and for the next four years, elected CAQ officials will continue to exacerbate racial tensions, implementing an immigration policy that openly seeks the subordination of migrants and racialized people. Absent any mechanisms by which to hold these officials accountable, we will have to take up tried and tested grassroots tactics as well as imagine and re imagine new ones—ones better suited to a world so (not so?) thoroughly surveilled. The bureaucratic and violent mechanisms through which the state enacts it’s white supremacist policies will have to be undermined, thwarted, or else thoroughly destroyed.