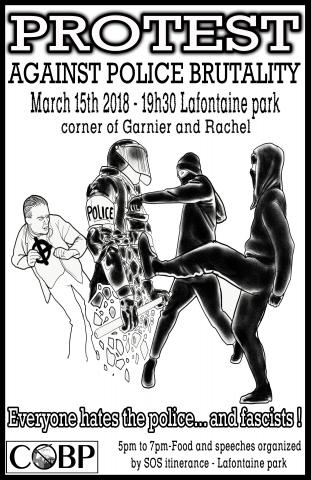 For more than over 20 years now, the C.O.B.P. has been inviting all citizens to participate in demonstrations aiming to express anger towards the fact that the Quebec Police corps feeds off of repression, profiling and brutality. Each year, we issue several claims pertaining to the police’s intervention methods, their abuse and the impunity that is of second nature to their profession. This year is no exception : the Collectif Opposé à la Brutalité Policière invites you to take to the streets on March 15, 2018, in order to express by all means necessary our refusal to bow down to the colonial and capitalist authority that is the police. It is of utmost importance to highlight the fact that this demonstration will take place on unsurrendered indigenous territory which the Quebec political class continues to think is an area that it governs.

The behaviours demonstrated by the police towards which we take offence are particularly extensive. However, this year, we think it is paramount to expose the complicity that exists within members of the Quebec police corps in relation to far-right groups, anti-immigration groups and islamophobic groups. It is because of this complicity that racist group gatherings are allowed to take place without having to face counter-demonstration. Indeed, police repression is now exercised towards counter-demonstration, to the benefit of far right and neo-Nazi groups. The result is that violent and pro-arms anti-immigration groups are freely allowed to disseminate their propaganda.

We also need to highlight the fact that the Quebec media is partially responsible for the rise in far-right groups when they work to discredit the anti-fascist ideology and its efforts. The media goes as far as to publish weak comparisons between the pressure tactics used by the far-left and the extremely violent attacks perpetrated by the far-right. It is as though the tragic attack against the mosque in St-Foy, which took the life of several innocent bystanders, never happened. Certain media outlets continue to feed the far-right by falsely explaining that an attack such as this one was fuelled by islamophobic hate.

This year, the C.O.B.P. wishes to express feelings of revolt towards the media, towards the rise of far-right groups and towards the entire Quebec police corps. We are calling upon all Quebec citizens to push against the rise of the far-right by all means necessary. For years now, we have been saying that the police are in bed with fascist wealth and this year, the police force has demonstrated this more than ever.

Here is the reason why we are joining the anti-fascist struggle and inviting you to Parc La Fontaine on March 15th for a « 5 à 7 » cocktail event where food will be served and where you can take the floor to express your opinions (organized by SOS initinérance), followed at 7:30 pm by the actual annual demonstration against police brutality, which will also take off from Parc La Fontaine.

EVERYONE HATES THE POLICE… AND THE FASCISTS!