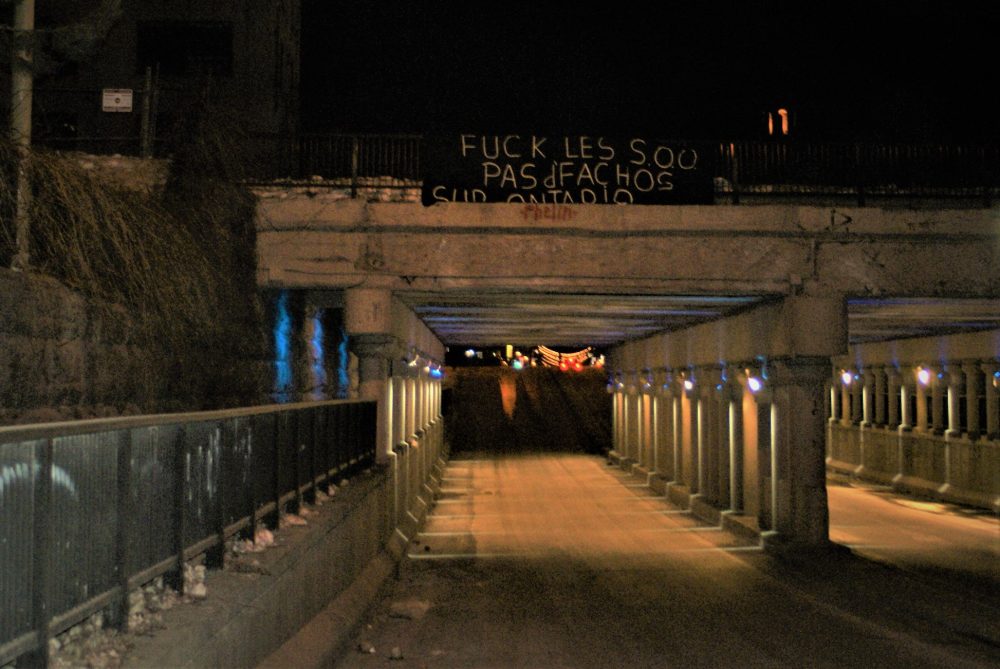 Since the last boneheads (neonazi skinheads) were run out of the neighbourhood around 2008, the neighbourhood of Hochelaga had once again become a little paradise for bums like us, for punks, for counter-culture overall. It is a multicultural neighbourhood where we feel good, where everyone speaks to each other easily and where there is a lot of solidarity…

Since the return and the multiplication of racist groups in Quebec since 2016, our neighbourhood hasn’t been immune but continues to resist and hold itself well!

We were happy to learn that the duo of fascist youtubers (they don’t even hide themselves) DMS aka Maxime Morin and Guillaume Beauchamp were kicked out of the neighbourhood by antifascists. We were no longer capable of enduring them, all the way to Chic Resto Pop where they sometimes went to eat… the fuckers didn’t lack a sense of humor when they ate there, those who hate the poor!

We were also told that the last time Soldiers of Odin visited to come fuck with the punks in the neighbourhood this winter, the SOO ran away like rabbits!

We may be antifascists but we are not psychopaths. When we came across two ex-members of the viking-nazi group the Wolves of Odin at the l’Espace Public bar, well we let them drink their beers in peace because it seems like these two dudes are no longer involved in a racist group. That’s what we want, so we’re watching you, but we’ll do nothing as long as you don’t do anything stupid…

Next weekend, on Sunday July 1st, two racist groups will come demonstrate in our city: La Meute and Storm Alliance. These groups are not yet fully implanted in Montreal but we must stay vigilant. Some of their members live in our neighbourhood! 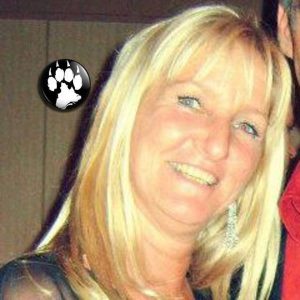 This is the case with Chantal Graton, a La Meute activist who lives on Leclaire street, close to the corner of Ontario. We will not give out her address for the moment because she has a daughter who is still in CEGEP and children are not responsible for the racism of their parents. Chantal is a Facebook addict, she shares fake news all day long and she has persuaded herself that Muslims are invading, that Muslim “blood” leads to criminality, to rape, and to pedophilia. Hey what’s your problem Chantal, what do you say to your Muslim neighbours when you run into them in the east of Hochelaga where you live? Who poses a danger for the security of others, in your opinion? 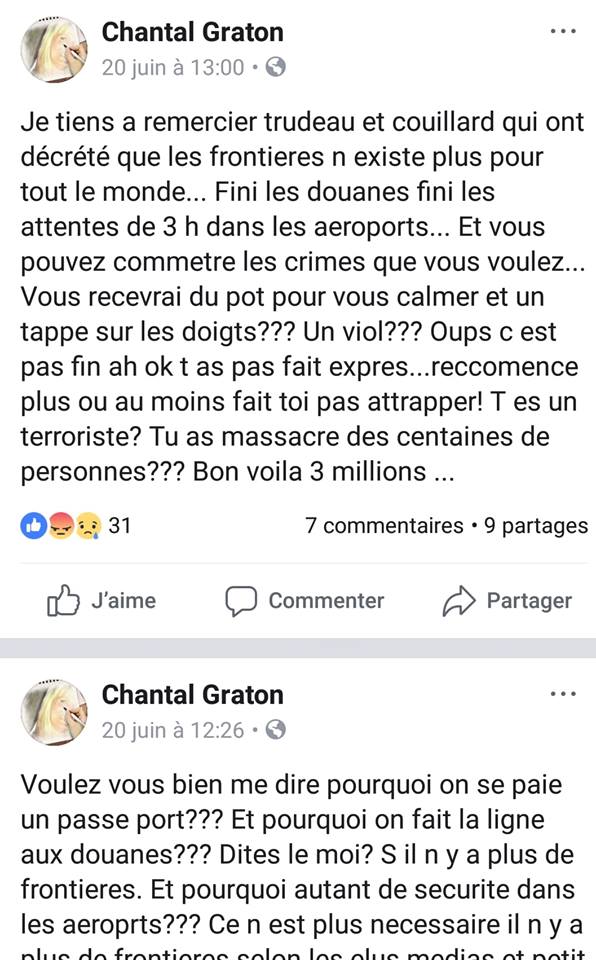 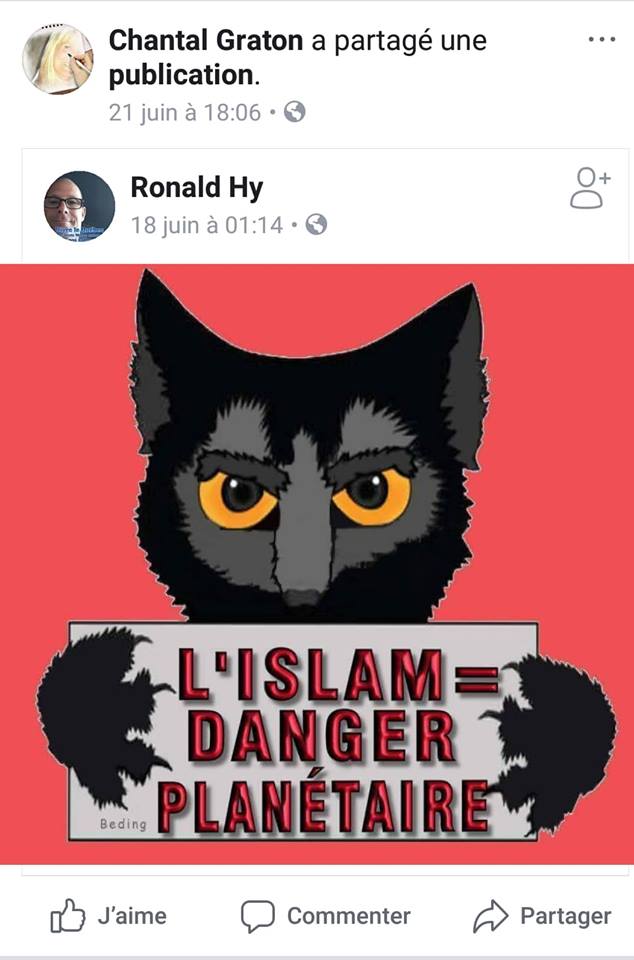 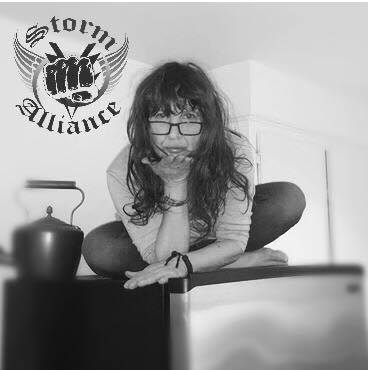 There is also Patricia “La Rebelle” Ramez, activist in Storm Alliance, who lives at 2660 Théodore street (just a couple steps from métro Viau). Proud nationalist activist (this is not a crime) for years, she is a big fan of the neo-nazi group the Soldiers of Odin and she hates “Antifas.” Recently, she offered her help to SOO when they promised 1000$ to anyone who would provide them with information to find those who attacked them. When she talks about “Fan-fans” it’s antifas, and “cellules” are what Storm Alliance calls antifascists. What the hell, what’s your fucking problem when you prefer to help organized crime rather than those who fight against fascism? 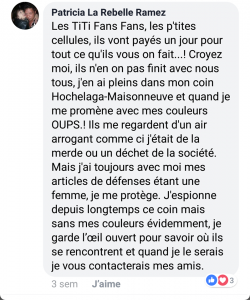 These two people are supposed to participate in the demonstration on July 1st with La Meute and Storm Alliance in Montreal. We tried to communicate with them, we left anti-racist information at their doors but it didn’t interest them, they prefer to shut themselves in with racism, islamophobia, hatred of others… when the real problem in Quebec today, the shit-disturbers, are you and your pathetic bands of racists!

We have shared your addresses so that you realize that actions have consequences.

We will unveil more addresses in the neighbourhood very soon.

Signed: some residents of the neighbourhood of Hochelaga