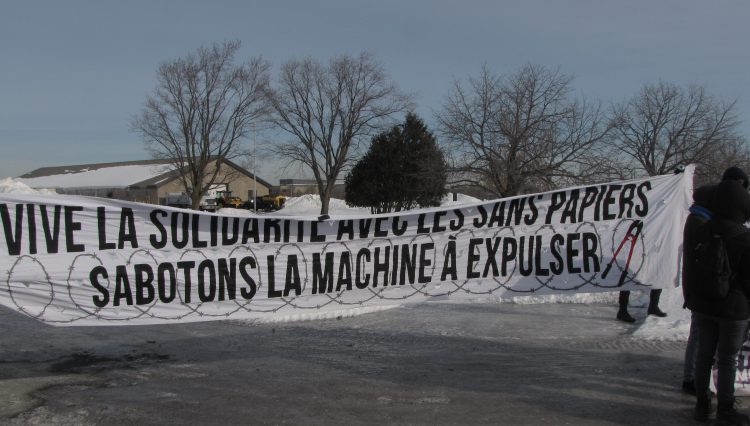 Much of the ground may be covered in a thick sheet of ice right now, and piles of snow have been growing around the construction site for the new migrant prison in Laval for weeks, but that doesn’t mean the Canadian government isn’t hard at work preparing the next stages of construction for this monstrosity, nor that we should turn our attention away until after the spring thaw.

Early in February, it became public that the bidding period for the General Contractor contract had opened for the project, and that there would be a site visit held on February 20th at 10am for all interested bidders. So, early in the morning on February 20th, a group of people gathered to take a bus out to the construction site in Laval. 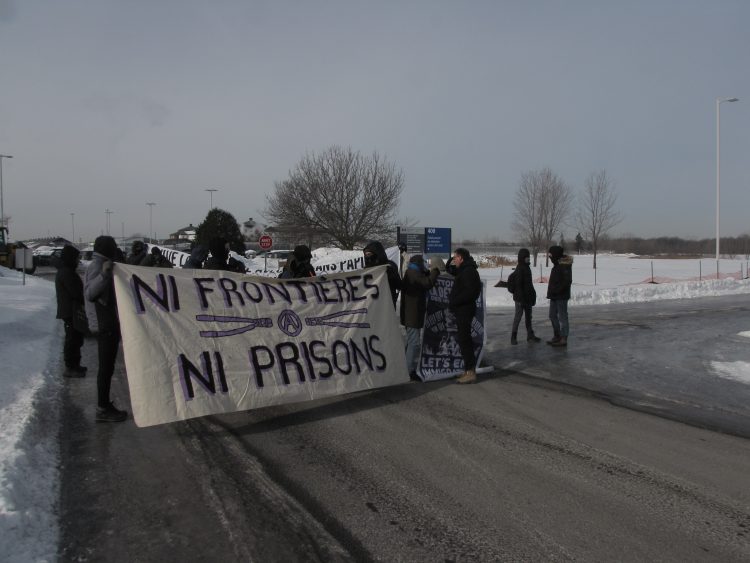 The group quickly made their way to the road leading to the security check-in for the bidders, and set up a picket, blocking the bidders’ vehicles from getting to the site. People there to pick up loved ones from the neighbouring prisons were welcomed through, and responded in kind with cheers and honks of support for the demo. Those present loudly communicated the deplorable nature of the prison project, and registered to all those considering working on it that there would be people standing in the way of the project at every stage.

People shouted, banged pots and pans, and blew on horns for over an hour, and had banners and signs against prisons and borders, as well as silhouette posters with the names of people deported in recent years. Company representatives present were personally called out, to let them know opponents of the project are aware of who they are. Some of the company representatives, sent by their bosses to attend the visit, expressed support for the demo following conversations with those in attendance. Over the course of an hour, most of the bidders had turned their cars around and left, accepting that they would not be allowed through. By 11am, an hour after the visit had been scheduled to begin, the group packed up their banners and left the area, leaving behind only a couple of cars – mostly Laval police. 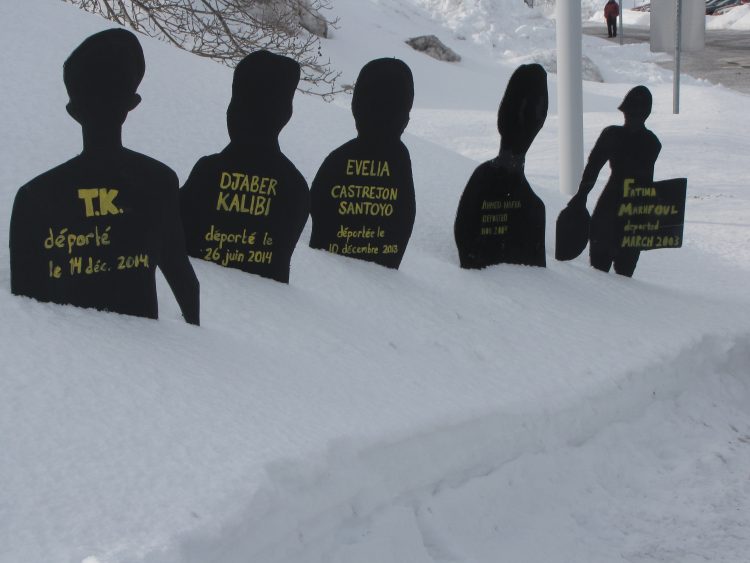 With a month of bidding left, it’s time to assess what we know and what we can do next to disrupt the project. Read on for important updates on the state of the prison project, and newly public information about other companies involved.

Since the summer of 2017, Montreal based Lemay and Quebec City based Groupe A have been working on the architectural plans for the prison. In December 2018, Englobe Corporation and Excavation Loiselle completed their environmental remediation work on the sprawling CSC grounds that may become home to an additional prison on Montee St-Francois, already host to the current migrant prison, the minimum and medium federal men’s prisons, and the provincial Leclerc institution. For quite some time, the timeline for construction to begin in earnest on the project has been unclear.

On January 31, 2019, however, Public Works and Government Services Canada posted their call for tenders for who will be in charge of the largest chunk of work on the prison – the General Contractor. The documents provided to interested bidders provide important information about the next phases of work, and offer ideas about where to intervene.

January 31st marked day one of the six-week bidding period for the General Contractor position. Bidding will be open until March 20th, at which time the company with the lowest bid will get the contract.

During the bidding period, companies interested in bidding on the project are invited to post their information on the publicly available “List of interested suppliers”. On this list, accessible on the government buy and sell website, one can find the company name, contact person, email, and phone number for each company who publicly discloses their interest in the project, though some companies do not publicly state their interest using this list. Many more tried to attend the site visit on February 20th.

As of February 20th, the following information is available for six interested bidders. :

Also present for the site visit were representatives of the following companies:

Whoever gets this contract, they will be involved in the project until the projected end of construction (the end of March, 2021). They will be responsible for subcontracting out smaller parts of the construction work – these contracts will likely not be made public.

Other companies involved in the project

Included in the documents released with the call for tenders is a list of other companies with contracts related to the prison, as well as the person responsible for the contract at each company. Some, like Lemay and Groupe A, are names we’ve seen before, as their contracts have been public for a long time already.

Lemay and Groupe A

Other companies listed are new names – possibly members of a collection of firms with whom the government has what’s called a “standing offer” to work.

Engineer Louis Beauchemin, from the Montreal office of KJA Consultants Inc., features on the documents representing his elevator and escalator design company in their work on conveyor systems for the prison.

The engineering consulting firm BPA, otherwise known as Bouthillette Parizeau, will be involved in food services and commissioning for the prison. For food services, engineer Sylvie Savoie is representing the company, and for commissioning engineer Dalia Ramy appears to be in charge.

Stantec, a huge design, consulting and engineering firm with an office in Longueuil, appears to be heavily involved in many aspects of the project.

For their roles related to electrical and fire alarm work, and fire protection, engineers Alexandre Manseau-Nguyen and Bruno Lehoux are in charge, respectively.
For their telecommunication work, engineer Jonathan Hallee is listed.

Stantec is also involved in many aspects of the engineering work, with the following representatives related to different subsections. Louis-Stephane Racicot’s role is as Engineering Project Manager. Engineer Alexandre Jean is in charge of mechanical, Michel Gendron in charge of electrical, Patrick Bourgeois is listed for structure, and for civil Martin Charron.

While it may not be clear what specific work will be happening when, the bid documents indicate that when the construction begins, work will be occurring until 9pm maximum from Monday to Saturday, with noise-generating work happening only 7am to 6pm these days, and no work at all occurring on Sundays or statutory holidays.

There will be offices on site to securely store documents, as well as two site cameras which will be constantly livestreaming work and the site to a private website accessible to a government representative at all times.
Fences obscuring the view into the site will be erected. The documents mention that all workers will have to pass security clearance and will be prohibited from speaking to any Leclerc Detention facility prisoners (who are held just beside the site).

What to expect in the near future

It is reasonable to expect re-excavation and foundational work to begin very quickly following the awarding of the contract to the General Contractor at the end of March. This means that those opposed to the construction of yet another piece of infrastructure solely designed to bolster the government’s capacity to detain and deport migrants must be hard at work as well, as construction may start in earnest in the next month.

Companies considering involving themselves in this entirely unacceptable project, serving only to rip apart families and communities, would do well to stay far away from this project. They may risk their reputation, their clients, and their money by choosing to lend their expertise to this unambiguously racist and violent project in a moment where it is extremely important for everyone to pick a side: against white supremacy and xenophobia. Companies providing materials for the construction, or interested in being subcontracted to work in a more limited role should also think long and hard before making an unethical and indefensible choice.

For a world without prisons or borders.
For freedom of movement and freedom to live for all.

For more background information on the migrant prison project, and to download materials and research documents related to the struggle against it, visit stopponslaprison.info.

To read the documents summarized in this piece, you can download them directly from the government website using these links. We recommend using TorBrowser to avoid giving your IP address.