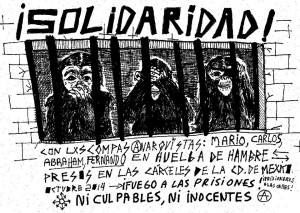 Since October 1st, 2014, four anarchist prisoners in different penitentiaries of Mexico City are on indefinite hunger strike: Carlos López Marín (“El Chivo”, held in the Eastern Prison), Mario González (in the Tepepan Medical Tower) and Fernando Bárcenas and Abraham Cortés Ávila (in the Northern Prison). You may read a common statement of the comrades and a short description of their cases here, and previous updates here.

Below is a report on their health condition on 15th day of hunger strike:

Carlos López has lost almost 7 kilos. The comrade is still separated from the general prison population, held in the newcomers’ area where he was transferred since the start of hunger strike. During the first days he was sharing a cell with another prisoner, but from October 5th he is held alone. He presents discomfort and heartburn from acid reflux, weakness and mild dizziness. They transfer him from the cell up to 4 times a day to take him to the medical service of the prison, mainly early in the morning, only to take his data and measure his blood pressure, given that the weighing scale is not working and they don’t have the necessary equipment to check the blood glucose levels. On Monday, October 13th, a nurse of the solidarity medical crew attempted to examine him, but she was denied entry for not having authorization. The sentencing of Carlos López, Amélie Pelletier and Fallon Poisson, charged with damages and attacks to public peace in the first case tried locally, is expected to be delivered in the next ten days.

Mario González faces some problems, mainly in his pancreas, as well as changes observed in the kidneys and liver during the days of hunger strike. His condition was considered as stable by a physician of the solidarity medical crew who examined him on Tuesday. He continues to present the same symptoms he had the previous days (abdominal pain, anxiety, physical debility, irritability and difficulty concentrating), except that the abdominal pain has increased. The director of the Tepepan Medical Tower has obstructed access to Mario’s medical record; the solidarian doctor gained access to the file on October 15th, and required that new laboratory tests be done. The comrade has lost about 10 kilos. He is currently awaiting resolution of an amparo petition he filed against his prison sentence.

Fernando Bárcenas has lost 3 kilos and 200 grams, while Abraham Cortés (whose conviction of 13 years and 4 months was recently upheld by an appeals court) has lost 3 kilos and 900 grams. Both comrades remain in the newcomers’ area where they have been held since their respective detentions. They are taken out of the cells for medical check several times in the early hours of the morning, so they cannot get a good night’s rest. They have restriction on phone calls.