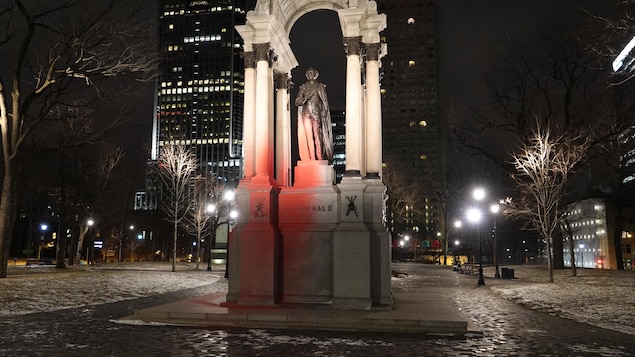 MONTREAL, March 17, 2019, 5am — At dawn today, on the International Day Against Racism, the racist and colonial John A. Macdonald Monument (1895) was again vandalized with paint.

This time, the #MacdonaldMustFall group in Montreal claims responsibility. Our action is undertaken in solidarity and support with worldwide actions and mobilizations against racism and fascism, including #UniteAgainstRacism demonstrations across Canada, coordinated by the Migrant Rights Network.

The #MacdonaldMustFall group reminds the media: John A. Macdonald was a white supremacist. He directly contributed to the genocide of Indigenous peoples with the creation of the brutal residential schools system, as well as other measures meant to destroy native cultures and traditions. He was racist and hostile towards non-white minority groups in Canada, openly promoting the preservation of a so-called “Aryan” Canada. He passed laws to exclude people of Chinese origin. He was responsible for the hanging of Métis martyr Louis Riel. Macdonald’s statue belongs in a museum, not as a monument taking up public space in Montreal.

Macdonald statues should be removed from public space and instead placed in archives or museums, where they belong as historical artifacts. Public space should celebrate collective struggles for justice and liberation, not white supremacy and genocide.