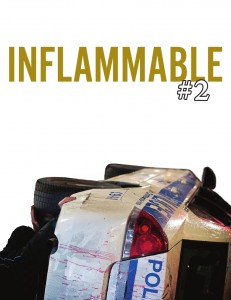 “The moment where we take back our lives, where we free ourselves from morality, fear, and the identities imposed on us. It cannot be stopped by a negotiation table, nor a ballot box. It isn’t the beginning of a movement nor will it die with a movement: It is to be alive, free, and wild!”

This issue is for all those who have weathered repression this last year.
For all the strong hearts willing to put their freedom on the line.

Inflammable #2
Demos and Actions beginning in September 2011
Against borders, police, prisons, and fascists / Solidarity with the G20 prisoners!

The strike begins: February 2012
On solidarity with “social movements” – open letter to anarchists / The occupation of Cégep du Vieux Montréal

March
Student action and demonstration against police / Wild demo, citizen-cops, solidarity with the Innu, and the pigs’ revenge / March 15 fucks up the cops

May
Anti-capitalist May Day / The battle of Victoriaville / Smoke bombs in the metro / La loi spéciale, on s’en câlisse! / An anarchist perspective on Bill 78 / May 22 / Imaginary “casseurs”. Ninjas vs. Pirates / Solidarity means attack