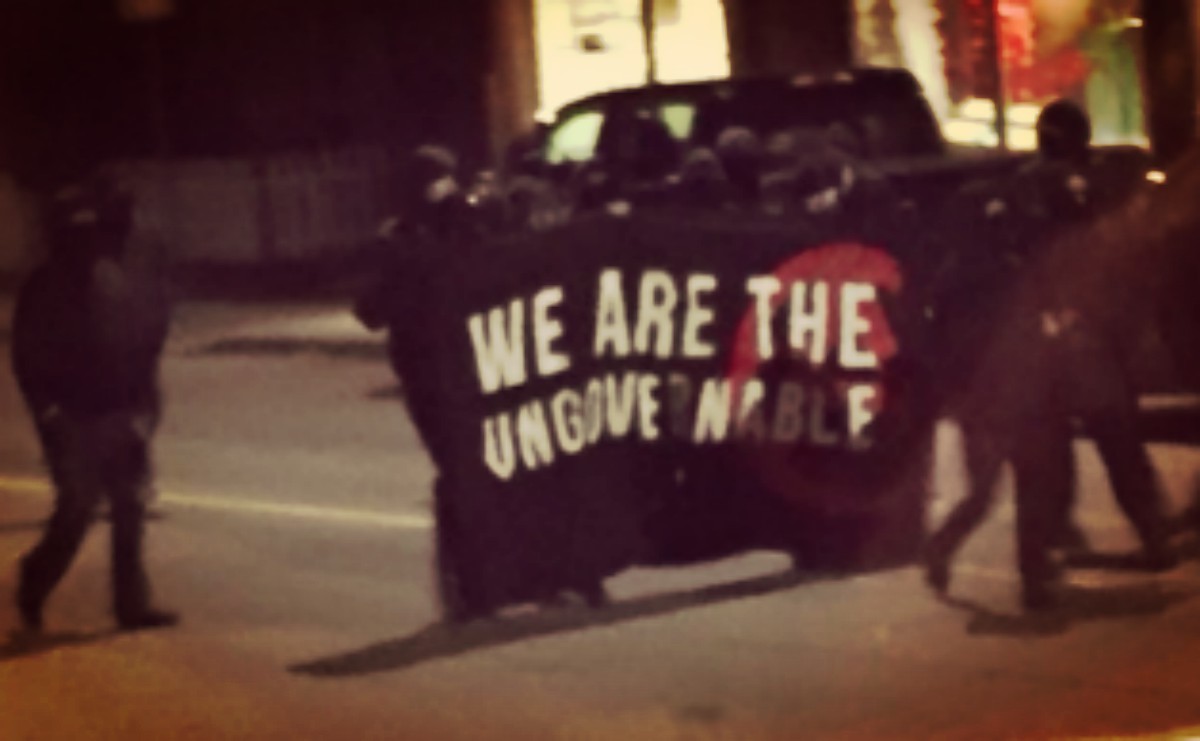 Text received as an anonymous submission

Every day — whether it’s the landlords charging ever more rent for ever shittier apartments, the boss pushing you to work harder, the business association lobbying for more cops, or just the Audi that cuts you off in rush hour — the rich make our lives worse. Every day we have to deal with their attacks on us, but every once in a while we can find a way to strike back.

On Saturday night, I met up with a group of people in the Durand neighbourhood, strolled along Aberdeen and up some of the side streets attacking the luxury cars and mansions we found there, making noise with a portable sound system and loads of fireworks. The march then turned down Locke and attacked as many yuppie businesses as we could before deciding to disperse. The police say we ran from them, but I didn’t see a single fucking cop after they were chased off up on Aberdeen.

To all the undoubtedly sincere and principled anti-capitalists on the internet who wonder why the Starbucks didn’t get smashed but all the poor, sweet small businesses did, it’s only because it was just a bit too far north. My one regret from the evening.

“Imagine being so mad about gentrification; that you round up some loser friends, cover your faces, and run riot in one of the city’s most affluent neighbourhoods. Throwing bricks at homes and businesses. You’re disgusting.”

That’s more or less it Kirk, me and my loser friends.

All my worst bosses have been small business owners — the problem isn’t the size of the business, it’s that the relationship is exploitative. When someone decides to be a capitalist, making money through their investments rather than through their labour, their position relative to changes in the city becomes fundamentally different. Gentrification, as an example: when rents go up, it means they make more money (rather than lose their home); when prices go up and rich people move in, it means a chance to sell luxury goods (while we work for minimum wage); when more police and surveillance come in, it secures your investment (while we get harassed and pushed out). They are getting rich because our lives are getting worse.

Sure, small business owners may work long hours, but even if I’m putting in 12 hour days next to my boss, and we both scrub the toilet, the fact that they own and I work means our relationship to the work is totally different. When business is good (or when they manage to crowdfund), they’re taking out a new lease on a car or signing a mortgage on an investment property while my check is eaten up by rent, bills, and the grocery store. I’ve got no option but to show up tomorrow while their ability to enrich themselves increases.

Fuck the rich. Fuck capitalists (even the ones who sell high-end baked goods). And to all of you who want to complain about violence, remember that the only reason these parasites get to keep their hands clean is because most often their attacks just look like business as usual.

Should we continue writing letters hoping Jason “I-want-an-Apple-store” Farr will do something? Or believing that somehow Andrea Horwath will stop kissing the Locke St BIA’s ass? Or we could trick ourselves that the solution to economic oppression is more innovative startups, or charity? Should I just keep smiling at the rich jerk in hopes that he’ll give me a bigger tip?

Locke St was downtown’s first gentrified street, its “success story” as Mayor Fred might say, the surrounding neighbourhoods the first to see the rent hikes that have since come to dominate so many of our lives. Turning the tables and finally counterattacking Saturday night helped me to shake off some of the fear and frustration that build up when you’re trapped in a hopeless situation. May the rich remember that they are still within the reach of all the people they fuck over.