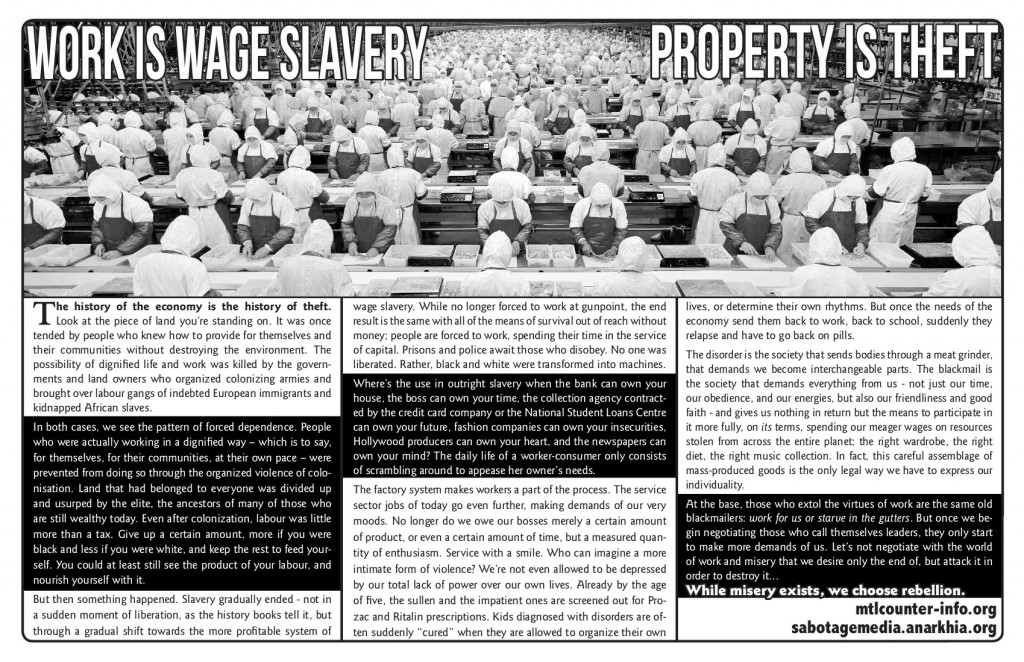 Look at the piece of land you’re standing on. It was once tended by people who knew how to provide for themselves and their communities without destroying the environment. The possibility of dignified life and work was killed by the governments and land owners who organized colonizing armies and brought over labour gangs of indebted European immigrants and kidnapped African slaves.

In both cases, we see the pattern of forced dependence. People who were actually working in a dignified way – which is to say, for themselves, for their communities, at their own pace – were prevented from doing so through the organized violence of colonisation. Land that had belonged to everyone was divided up and usurped by the elite, the ancestors of many of those who are still wealthy today. Even after colonization, labour was little more than a tax. Give up a certain amount, more if you were black and less if you were white, and keep the rest to feed yourself. You could at least still see the product of your labour, and nourish yourself with it.

But then something happened. Slavery gradually ended – not in a sudden moment of liberation, as the history books tell it, but through a gradual shift towards the more profitable system of wage slavery. While no longer forced to work at gunpoint, the end result is the same with all of the means of survival out of reach without money; people are forced to work, spending their time in the service of capital. Prisons and police await those who disobey. No one was liberated. Rather, black and white were transformed into machines.

Where’s the use in outright slavery when the bank can own your house, the boss can own your time, the collection agency contracted by the credit card company or the National Student Loans Centre can own your future, fashion companies can own your insecurities, Hollywood producers can own your heart, and the newspapers can own your mind? The daily life of a worker-consumer only consists of scrambling around to appease her owner’s needs.

The factory system makes workers a part of the process. The service sector jobs of today go even further, making demands of our very moods. No longer do we owe our bosses merely a certain amount of product, or even a certain amount of time, but a measured quantity of enthusiasm. Service with a smile. Who can imagine a more intimate form of violence? We’re not even allowed to be depressed by our total lack of power over our own lives. Already by the age of five, the sullen and the impatient ones are screened out for Prozac and Ritalin prescriptions. Kids diagnosed with disorders are often suddenly “cured” when they are allowed to organize their own lives, or determine their own rhythms. But once the needs of the economy send them back to work, back to school, suddenly they relapse and have to go back on pills.

The disorder is the society that sends bodies through a meat grinder, that demands we become interchangeable parts. The blackmail is the society that demands everything from us – not just our time, our obedience, and our energies, but also our friendliness and good faith – and gives us nothing in return but the means to participate in it more fully, on its terms, spending our meager wages on resources stolen from across the entire planet; the right wardrobe, the right diet, the right music collection. In fact, this careful assemblage of mass-produced goods is the only legal way we have to express our individuality.

At the base, those who extol the virtues of work are the same old blackmailers: work for us or starve in the gutters. But once we begin negotiating those who call themselves leaders, they only start to make more demands of us. Let’s not negotiate with the world of work and misery that we desire only the end of, but attack it in order to destroy it…

While misery exists, we choose rebellion.