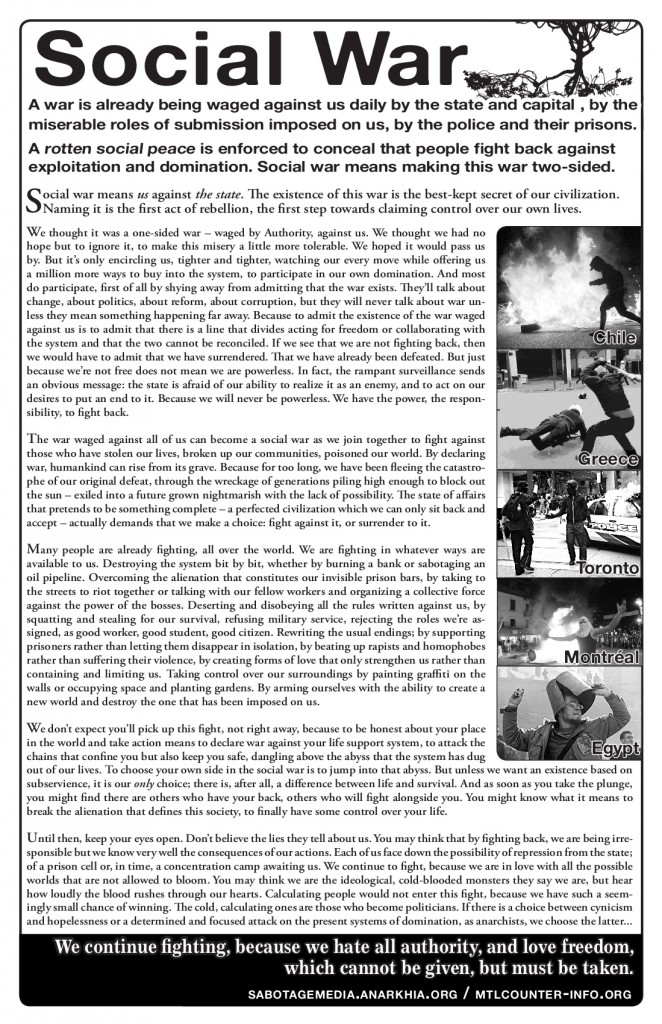 A war is already being waged against us daily by the state and capital , by the miserable roles of submission imposed on us, by the police and their prisons. A rotten social peace is enforced to conceal that people fight back against exploitation and domination. Social war means making this war two-sided.

Social war means us against the state. The existence of this war is the best-kept secret of our civilization. Naming it is the first act of rebellion, the first step towards claiming control over our own lives.

We thought it was a one-sided war – waged by Authority, against us. We thought we had no hope but to ignore it, to make this misery a little more tolerable. We hoped it would pass us by. But it’s only encircling us, tighter and tighter, watching our every move while offering us a million more ways to buy into the system, to participate in our own domination. And most do participate, first of all by shying away from admitting that the war exists. They’ll talk about change, about politics, about reform, about corruption, but they will never talk about war unless they mean something happening far away. Because to admit the existence of the war waged against us is to admit that there is a line that divides acting for freedom or collaborating with the system and that the two cannot be reconciled. If we see that we are not fighting back, then we would have to admit that we have surrendered. That we have already been defeated. But just because we’re not free does not mean we are powerless. In fact, the rampant surveillance sends an obvious message: the state is afraid of our ability to realize it as an enemy, and to act on our desires to put an end to it. Because we will never be powerless. We have the power, the responsibility, to fight back.

The war waged against all of us can become a social war as we join together to fight against those who have stolen our lives, broken up our communities, poisoned our world. By declaring war, humankind can rise from its grave. Because for too long, we have been fleeing the catastrophe of our original defeat, through the wreckage of generations piling high enough to block out the sun – exiled into a future grown nightmarish with the lack of possibility. The state of affairs that pretends to be something complete – a perfected civilization which we can only sit back and accept – actually demands that we make a choice: fight against it, or surrender to it.

Many people are already fighting, all over the world. We are fighting in whatever ways are available to us. Destroying the system bit by bit, whether by burning a bank or sabotaging an oil pipeline. Overcoming the alienation that constitutes our invisible prison bars, by taking to the streets to riot together or talking with our fellow workers and organizing a collective force against the power of the bosses. Deserting and disobeying all the rules written against us, by squatting and stealing for our survival, refusing military service, rejecting the roles we’re assigned, as good worker, good student, good citizen. Rewriting the usual endings; by supporting prisoners rather than letting them disappear in isolation, by beating up rapists and homophobes rather than suffering their violence, by creating forms of love that only strengthen us rather than containing and limiting us. Taking control over our surroundings by painting graffiti on the walls or occupying space and planting gardens. By arming ourselves with the ability to create a new world and destroy the one that has been imposed on us.

We don’t expect you’ll pick up this fight, not right away, because to be honest about your place in the world and take action means to declare war against your life support system, to attack the chains that confine you but also keep you safe, dangling above the abyss that the system has dug out of our lives. To choose your own side in the social war is to jump into that abyss. But unless we want an existence based on subservience, it is our only choice; there is, after all, a difference between life and survival. And as soon as you take the plunge, you might find there are others who have your back, others who will fight alongside you. You might know what it means to break the alienation that defines this society, to finally have some control over your life.

Until then, keep your eyes open. Don’t believe the lies they tell about us. You may think that by fighting back, we are being irresponsible but we know very well the consequences of our actions. Each of us face down the possibility of repression from the state; of a prison cell or, in time, a concentration camp awaiting us. We continue to fight, because we are in love with all the possible worlds that are not allowed to bloom. You may think we are the ideological, cold-blooded monsters they say we are, but hear how loudly the blood rushes through our hearts. Calculating people would not enter this fight, because we have such a seemingly small chance of winning. The cold, calculating ones are those who become politicians. If there is a choice between cynicism and hopelessness or a determined and focused attack on the present systems of domination, as anarchists, we choose the latter…

We continue fighting, because we hate all authority, and love freedom, which cannot be given, but must be taken.