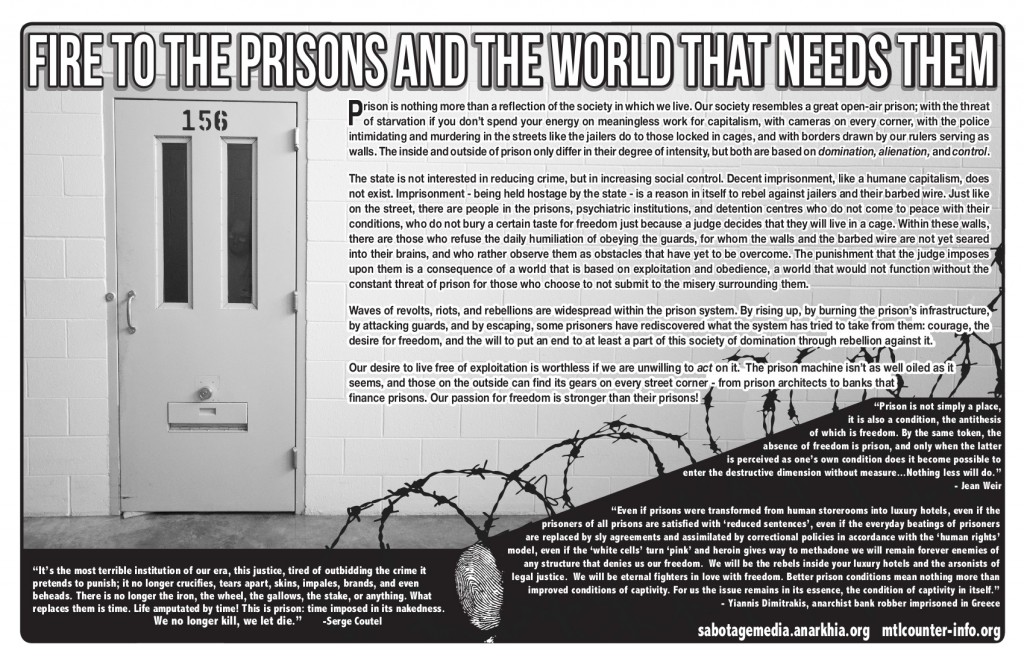 FIRE TO THE PRISONS AND THE WORLD THAT NEEDS THEM

Prison is nothing more than a reflection of the society in which we live. Our society resembles a great open-air prison; with the threat of starvation if you don’t spend your energy on meaningless work for capitalism, with cameras on every corner, with the police intimidating and murdering in the streets like the jailers do to those locked in cages, and with borders drawn by our rulers serving as walls. The inside and outside of prison only differ in their degree of intensity, but both are based on domination, alienation, and control.

The state is not interested in reducing crime, but in increasing social control. Decent imprisonment, like a humane capitalism, does not exist. Imprisonment – being held hostage by the state – is a reason in itself to rebel against jailers and their barbed wire. Just like on the street, there are people in the prisons, psychiatric institutions, and detention centres who do not come to peace with their conditions, who do not bury a certain taste for freedom just because a judge decides that they will live in a cage. Within these walls, there are those who refuse the daily humiliation of obeying the guards, for whom the walls and the barbed wire are not yet seared into their brains, and who rather observe them as obstacles that have yet to be overcome. The punishment that the judge imposes upon them is a consequence of a world that is based on exploitation and obedience, a world that would not function without the constant threat of prison for those who choose to not submit to the misery surrounding them.

Waves of revolts, riots, and rebellions are widespread within the prison system. By rising up, by burning the prison’s infrastructure, by attacking guards, and by escaping, some prisoners have rediscovered what the system has tried to take from them: courage, the desire for freedom, and the will to put an end to at least a part of this society of domination through rebellion against it.

Our desire to live free of exploitation is worthless if we are unwilling to act on it.  The prison machine isn’t as well oiled as it seems, and those on the outside can find its gears on every street corner – from prison architects to banks that finance prisons. Our passion for freedom is stronger than their prisons!

“It’s the most terrible institution of our era, this justice, tired of outbidding the crime it pretends to punish; it no longer crucifies, tears apart, skins, impales, brands, and even beheads. There is no longer the iron, the wheel, the gallows, the stake, or anything. What replaces them is time. Life amputated by time! This is prison: time imposed in its nakedness. We no longer kill, we let die.” – Serge Coutel

“Even if prisons were transformed from human storerooms into luxury hotels, even if the prisoners of all prisons are satisfied with ‘reduced sentences’, even if the everyday beatings of prisoners are replaced by sly agreements and assimilated by correctional policies in accordance with the ‘human rights’ model, even if the ‘white cells’ turn ‘pink’ and heroin gives way to methadone we will remain forever enemies of any structure that denies us our freedom. We will be the rebels inside your luxury hotels and the arsonists of legal justice. We will be eternal fighters in love with freedom. Better prison conditions mean nothing more than improved conditions of captivity. For us the issue remains in its essence, the condition of captivity in itself.” – Yiannis Dimitrakis, anarchist bank robber imprisoned in Greece

“Prison is not simply a place, it is also a condition, the antithesis of which is freedom. By the same token, the absence of freedom is prison, and only when the latter is perceived as one’s own condition does it become possible to enter the destructive dimension without measure…Nothing less will do.” – Jean Weir