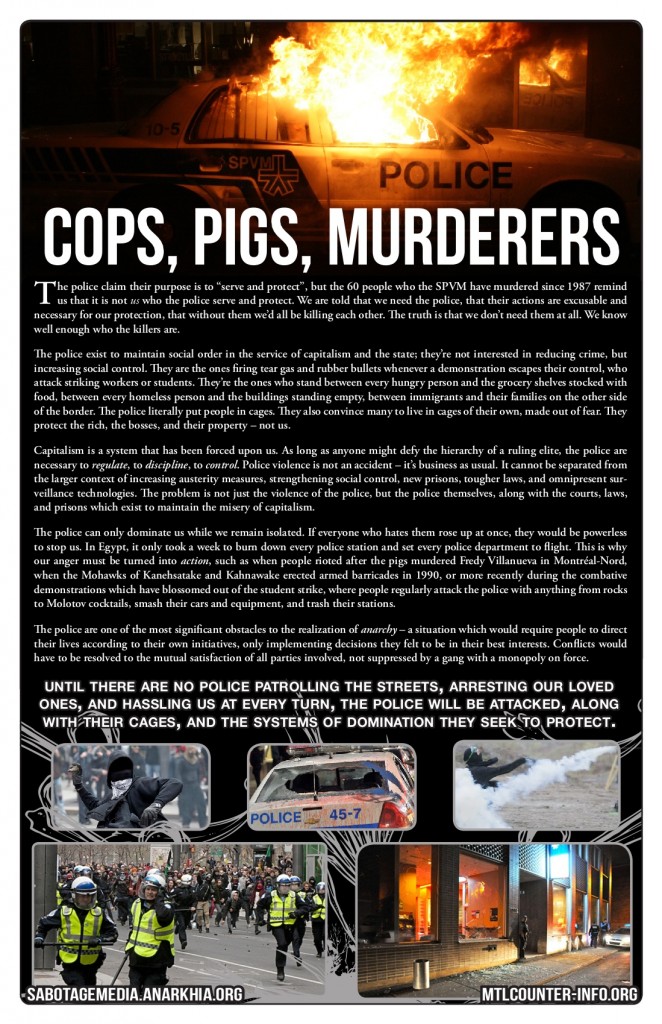 The police claim their purpose is to “serve and protect”, but the 60 people who the SPVM have murdered since 1987 remind us that it is not us who the police serve and protect. We are told that we need the police, that their actions are excusable and necessary for our protection, that without them we’d all be killing each other. The truth is that we don’t need them at all. We know well enough who the killers are.

The police exist to maintain social order in the service of capitalism and the state; they’re not interested in reducing crime, but increasing social control. They are the ones firing tear gas and rubber bullets whenever a demonstration escapes their control, who attack striking workers or students. They’re the ones who stand between every hungry person and the grocery shelves stocked with food, between every homeless person and the buildings standing empty, between immigrants and their families on the other side of the border. The police literally put people in cages. They also convince many to live in cages of their own, made out of fear. They protect the rich, the bosses, and their property – not us.

Capitalism is a system that has been forced upon us. As long as anyone might defy the hierarchy of a ruling elite, the police are necessary to regulate, to discipline, to control. Police violence is not an accident – it’s business as usual. It cannot be separated from the larger context of increasing austerity measures, strengthening social control, new prisons, tougher laws, and omnipresent surveillance technologies. The problem is not just the violence of the police, but the police themselves, along with the courts, laws, and prisons which exist to maintain the misery of capitalism.

The police can only dominate us while we remain isolated. If everyone who hates them rose up at once, they would be powerless to stop us. In Egypt, it only took a week to burn down every police station and set every police department to flight. This is why our anger must be turned into action, such as when people rioted after the pigs murdered Fredy Villanueva in Montréal-Nord, when the Mohawks of Kanehsatake and Kahnawake erected armed barricades in 1990, or more recently during the combative demonstrations which have blossomed out of the student strike, where people regularly attack the police with anything from rocks to Molotov cocktails, smash their cars and equipment, and trash their stations.

The police are one of the most significant obstacles to the realization of anarchy – a situation which would require people to direct their lives according to their own initiatives, only implementing decisions they felt to be in their best interests. Conflicts would have to be resolved to the mutual satisfaction of all parties involved, not suppressed by a gang with a monopoly on force.

UNTIL THERE ARE NO POLICE PATROLLING THE STREETS, ARRESTING OUR LOVED ONES, AND HASSLING US AT EVERY TURN, THE POLICE WILL BE ATTACKED, ALONG WITH THEIR CAGES, AND THE SYSTEMS OF DOMINATION THEY SEEK TO PROTECT.