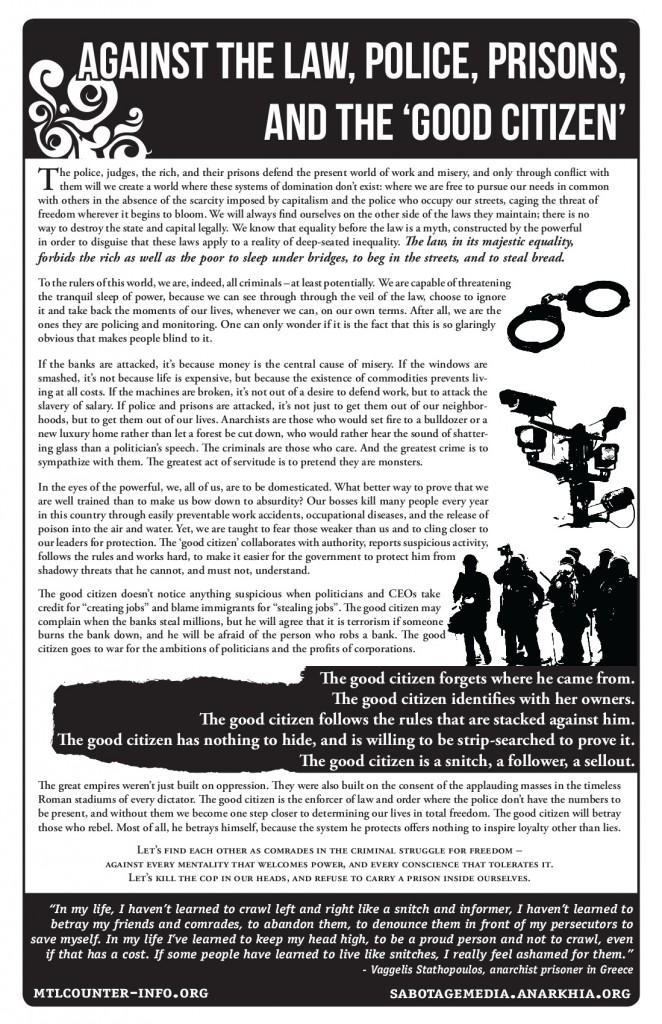 AGAINST THE LAW, POLICE, PRISONS, AND THE ‘GOOD CITIZEN’

The police, judges, the rich, and their prisons defend the present world of work and misery, and only through conflict with them will we create a world where these systems of domination don’t exist: where we are free to pursue our needs in common with others in the absence of the scarcity imposed by capitalism and the police who occupy our streets, caging the threat of freedom wherever it begins to bloom. We will always find ourselves on the other side of the laws they maintain; there is no way to destroy the state and capital legally. We know that equality before the law is a myth, constructed by the powerful in order to disguise that these laws apply to a reality of deep-seated inequality. The law, in its majestic equality, forbids the rich as well as the poor to sleep under bridges, to beg in the streets, and to steal bread.

To the rulers of this world, we are, indeed, all criminals – at least potentially. We are capable of threatening the tranquil sleep of power, because we can see through through the veil of the law, choose to ignore it and take back the moments of our lives, whenever we can, on our own terms. After all, we are the ones they are policing and monitoring. One can only wonder if it is the fact that this is so glaringly obvious that makes people blind to it.

If the banks are attacked, it’s because money is the central cause of misery. If the windows are smashed, it’s not because life is expensive, but because the existence of commodities prevents living at all costs. If the machines are broken, it’s not out of a desire to defend work, but to attack the slavery of salary. If police and prisons are attacked, it’s not just to get them out of our neighborhoods, but to get them out of our lives. Anarchists are those who would set fire to a bulldozer or a new luxury home rather than let a forest be cut down, who would rather hear the sound of shattering glass than a politician’s speech. The criminals are those who care. And the greatest crime is to sympathize with them. The greatest act of servitude is to pretend they are monsters.

In the eyes of the powerful, we, all of us, are to be domesticated. What better way to prove that we are well trained than to make us bow down to absurdity? Our bosses kill many people every year in this country through easily preventable work accidents, occupational diseases, and the release of poison into the air and water. Yet, we are taught to fear those weaker than us and to cling closer to our leaders for protection. The ‘good citizen’ collaborates with authority, reports suspicious activity, follows the rules and works hard, to make it easier for the government to protect him from shadowy threats that he cannot, and must not, understand.

The good citizen forgets where he came from.

The good citizen identifies with her owners.

The good citizen follows the rules that are stacked against him.

The good citizen has nothing to hide, and is willing to be strip-searched to prove it.

The good citizen is a snitch, a follower, a sellout.

The great empires weren’t just built on oppression. They were also built on the consent of the applauding masses in the timeless Roman stadiums of every dictator. The good citizen is the enforcer of law and order where the police don’t have the numbers to be present, and without them we become one step closer to determining our lives in total freedom. The good citizen will betray those who rebel. Most of all, he betrays himself, because the system he protects offers nothing to inspire loyalty other than lies

AGAINST EVERY MENTALITY THAT WELCOMES POWER, AND EVERY CONSCIENCE THAT TOLERATES IT.

LET’S KILL THE COP IN OUR HEADS, AND REFUSE TO CARRY A PRISON INSIDE OURSELVES.

“In my life, I haven’t learned to crawl left and right like a snitch and informer, I haven’t learned to betray my friends and comrades, to abandon them, to denounce them in front of my persecutors to save myself. In my life I’ve learned to keep my head high, to be a proud person and not to crawl, even if that has a cost. If some people have learned to live like snitches, I really feel ashamed for them.”Vaggelis Stathopoulos, anarchist prisoner in Greece