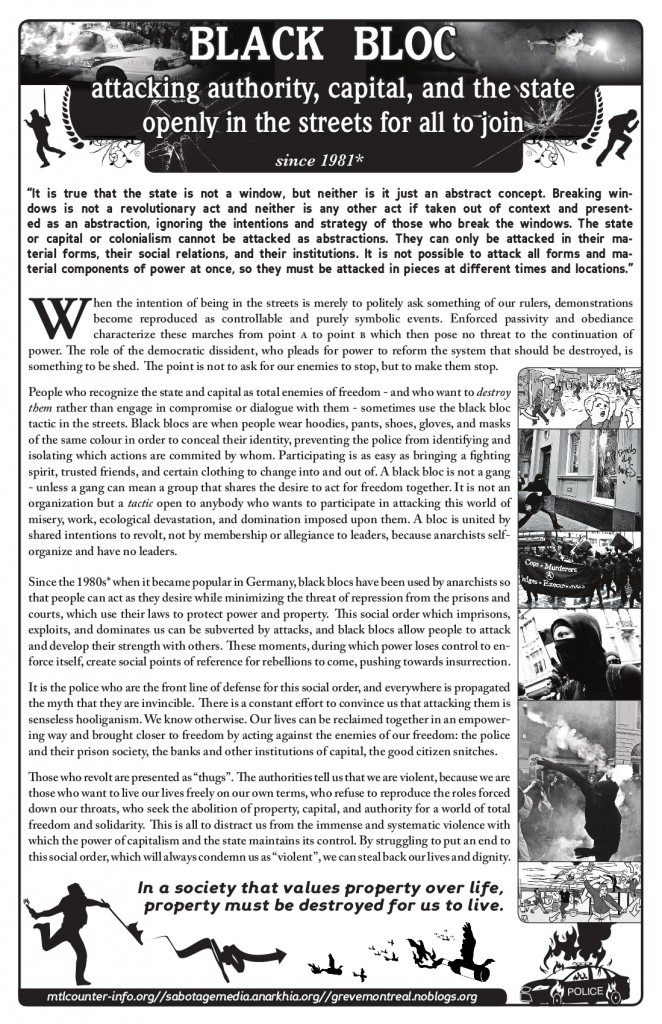 Black bloc: attacking authority, capital, and the state openly in the streets for all to join

“It is true that the state is not a window, but neither is it just an abstract concept. Breaking windows is not a revolutionary act and neither is any other act if taken out of context and presented as an abstraction, ignoring the intentions and strategy of those who break the windows. The state or capital or colonialism cannot be attacked as abstractions. They can only be attacked in their material forms, their social relations, and their institutions. It is not possible to attack all forms and material components of power at once, so they must be attacked in pieces at different times and locations.”

When the intention of being in the streets is merely to politely ask something of our rulers, demonstrations become reproduced as controllable and purely symbolic events. Enforced passivity and obediance characterize these marches from point a to point b which then pose no threat to the continuation of power. The role of the democratic dissident, who pleads for power to reform the system that should be destroyed, is something to be shed. The point is not to ask for our enemies to stop, but to make them stop.

People who recognize the state and capital as total enemies of freedom – and who want to destroy them rather than engage in compromise or dialogue with them – sometimes use the black bloc tactic in the streets. Black blocs are when people wear hoodies, pants, shoes, gloves, and masks of the same colour in order to conceal their identity, preventing the police from identifying and isolating which actions are commited by whom. Participating is as easy as bringing a fighting spirit, trusted friends, and certain clothing to change into and out of. A black bloc is not a gang – unless a gang can mean a group that shares the desire to act for freedom together. It is not an organization but a tactic open to anybody who wants to participate in attacking this world of misery, work, ecological devastation, and domination imposed upon them. A bloc is united by shared intentions to revolt, not by membership or allegiance to leaders, because anarchists self-organize and have no leaders.

Since the 1980s* when it became popular in Germany, black blocs have been used by anarchists so that people can act as they desire while minimizing the threat of repression from the prisons and courts, which use their laws to protect power and property. This social order which imprisons, exploits, and dominates us can be subverted by attacks, and black blocs allow people to attack and develop their strength with others. These moments, during which power loses control to enforce itself, create social points of reference for rebellions to come, pushing towards insurrection.

It is the police who are the front line of defense for this social order, and everywhere is propagated the myth that they are invincible. There is a constant effort to convince us that attacking them is senseless hooliganism. We know otherwise. Our lives can be reclaimed together in an empowering way and brought closer to freedom by acting against the enemies of our freedom: the police and their prison society, the banks and other institutions of capital, the good citizen snitches.

Those who revolt are presented as “thugs”. The authorities tell us that we are violent, because we are those who want to live our lives freely on our own terms, who refuse to reproduce the roles forced down our throats, who seek the abolition of property, capital, and authority for a world of total freedom and solidarity. This is all to distract us from the immense and systematic violence with which the power of capitalism and the state maintains its control. By struggling to put an end to this social order, which will always condemn us as “violent”, we can steal back our lives and dignity.

In a society that values property over life, property must be destroyed for us to live.