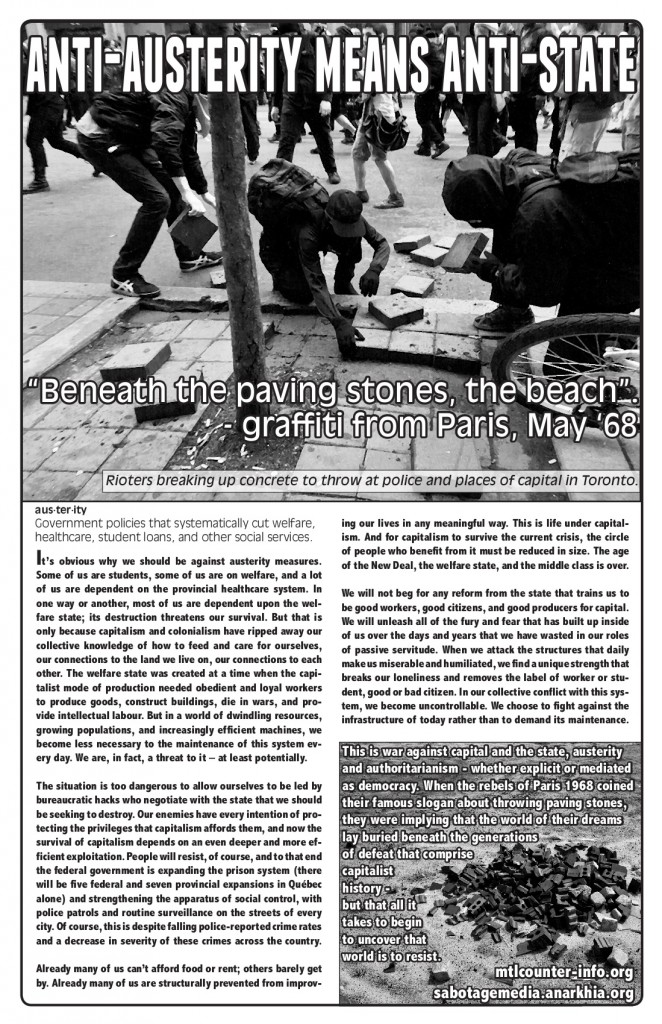 “Beneath the paving stones, the beach”. – graffiti from Paris, May ‘68

It’s obvious why we should be against austerity measures. Some of us are students, some of us are on welfare, and a lot of us are dependent on the provincial healthcare system. In one way or another, most of us are dependent upon the welfare state; its destruction threatens our survival. But that is only because capitalism and colonialism have ripped away our collective knowledge of how to feed and care for ourselves, our connections to the land we live on, our connections to each other. The welfare state was created at a time when the capitalist mode of production needed obedient and loyal workers to produce goods, construct buildings, die in wars, and provide intellectual labour. But in a world of dwindling resources, growing populations, and increasingly efficient machines, we become less necessary to the maintenance of this system every day. We are, in fact, a threat to it – at least potentially.

The situation is too dangerous to allow ourselves to be led by bureaucratic hacks who negotiate with the state that we should be seeking to destroy. Our enemies have every intention of protecting the privileges that capitalism affords them, and now the survival of capitalism depends on an even deeper and more efficient exploitation. People will resist, of course, and to that end the federal government is expanding the prison system (there will be five federal and seven provincial expansions in Québec alone) and strengthening the apparatus of social control, with police patrols and routine surveillance on the streets of every city. Of course, this is despite falling police-reported crime rates and a decrease in severity of these crimes across the country.

Already many of us can’t afford food or rent; others barely get by. Already many of us are structurally prevented from improving our lives in any meaningful way. This is life under capitalism. And for capitalism to survive the current crisis, the circle of people who benefit from it must be reduced in size. The age of the New Deal, the welfare state, and the middle class is over.

We will not beg for any reform from the state that trains us to be good workers, good citizens, and good producers for capital. We will unleash all of the fury and fear that has built up inside of us over the days and years that we have wasted in our roles of passive servitude. When we attack the structures that daily make us miserable and humiliated, we find a unique strength that breaks our loneliness and removes the label of worker or student, good or bad citizen. In our collective conflict with this system, we become uncontrollable. We choose to fight against the infrastructure of today rather than to demand its maintenance.

This is war against capital and the state, austerity and authoritarianism – whether explicit or mediated as democracy. When the rebels of Paris 1968 coined their famous slogan about throwing paving stones, they were implying that the world of their dreams lay buried beneath the generations of defeat that comprise capitalist history – but that all it takes to begin to uncover that world is to resist.