FOR AN END TO THE REPRESSION: LET’S MULTIPLY THE ACTIONS!
21ST INTERNATIONAL DAY AGAINST POLICE BRUTALITY!

For more than a decade, the COBP has denounced, through the International Day against Police Brutality, several themes of police: social cleansing, militarization, impunity, social / racial / political profiling, the slide towards more total social control, etc. We are seeing more and more that no matter what aspect of police work is denounced, there is absolutely nothing that changes. The recommendations of the Ménard commission, following the spring of 2012, sleep in an office drawer, the coroner’s inquest following the death of Alain Magloire, that is probably also sleeping in an office drawer, the 36 women’s complaint files from Val d’Or against the cops of the SQ that were rejected. In short, the more we advance in time, the more it is the same: the cops give themselves permission to do everything and get away with impunity.

The COBP underwent several changes during 2016 and decided this year to leave this core of denunciation and to move towards a unitary and constructive call for the annual demonstration against police brutality 2017. We therefore chose as theme: FOR AN END TO THE REPRESSION: LET’S MULTIPLY THE ACTIONS! Several events that occurred in 2016 motivated the choice of the theme: for the first time the demonstration of March 15, 2016 took place without seeing the urban brigade and the anti-riot police, the May 1 demonstration was tolerated more than two hours before the people of the demonstration were disgusted and attacked a police station, multiple demonstrations during 2016 that managed to take the street (let’s remember here that for two years we were starting mousetrap demonstrations), direct actions against pipelines were realized, the Montreal North riot on the day of commemoration of the death of Freddy Villanueva and Bony Jean-Pierre during which a police station was ransacked and a bank was set on fire, multiple attacks in Hochelaga and southwest of Montreal, sabotage of cameras, different occupations of land for diverse claims, and the victories in court to invalidate municipal by-laws. In short, as much as in demonstrations as in everyday life, people unite, struggle and quietly begin to find alternatives to act in all the struggles that the police that rejoice to repress: the anti-police struggle, anti-capitalist, anti-gentrification, against the prison environment, pipelines, the struggle to get the homeless off the street, the feminist, union, antifascist, indigenous, queer, and trans struggles, etc. A good fight-back is imminent and must be done not only by protests but equally by direct actions in everyday life.

2016 was marked by a “reshuffling” of police repression. Despite the pseudo mini relaxation of the repression in our protests with, for example, the end of mass arrests, ticket traps are getting worse and worse for the motorists, cyclists, subway users and the homeless. In addition, journalists are being watched by the SPVM! Naturally, the infighting of the SPVM is getting worse by the moment. We know very well that this “relaxation” is not due to the fact that we have a new chief of police but more because there have been multiple victories against tickets and invalid municipal by-laws which the cops love to use to repress us. Increasingly, more people are making the effort to contest their tickets, while others are developing, in their own way, new tactics of public disturbance.

We are young people and old people that are disgusted by this system, which feeds on prisons and its armed wing, the police. We must stop talking about the balance of power and put it into practice now! We must once and for all unite and face this repression. It is for all these reasons that the COBP invites you to the 21st annual event that will take place on March 15th at 7pm at Valois Place (corner of Ontario and Valois). 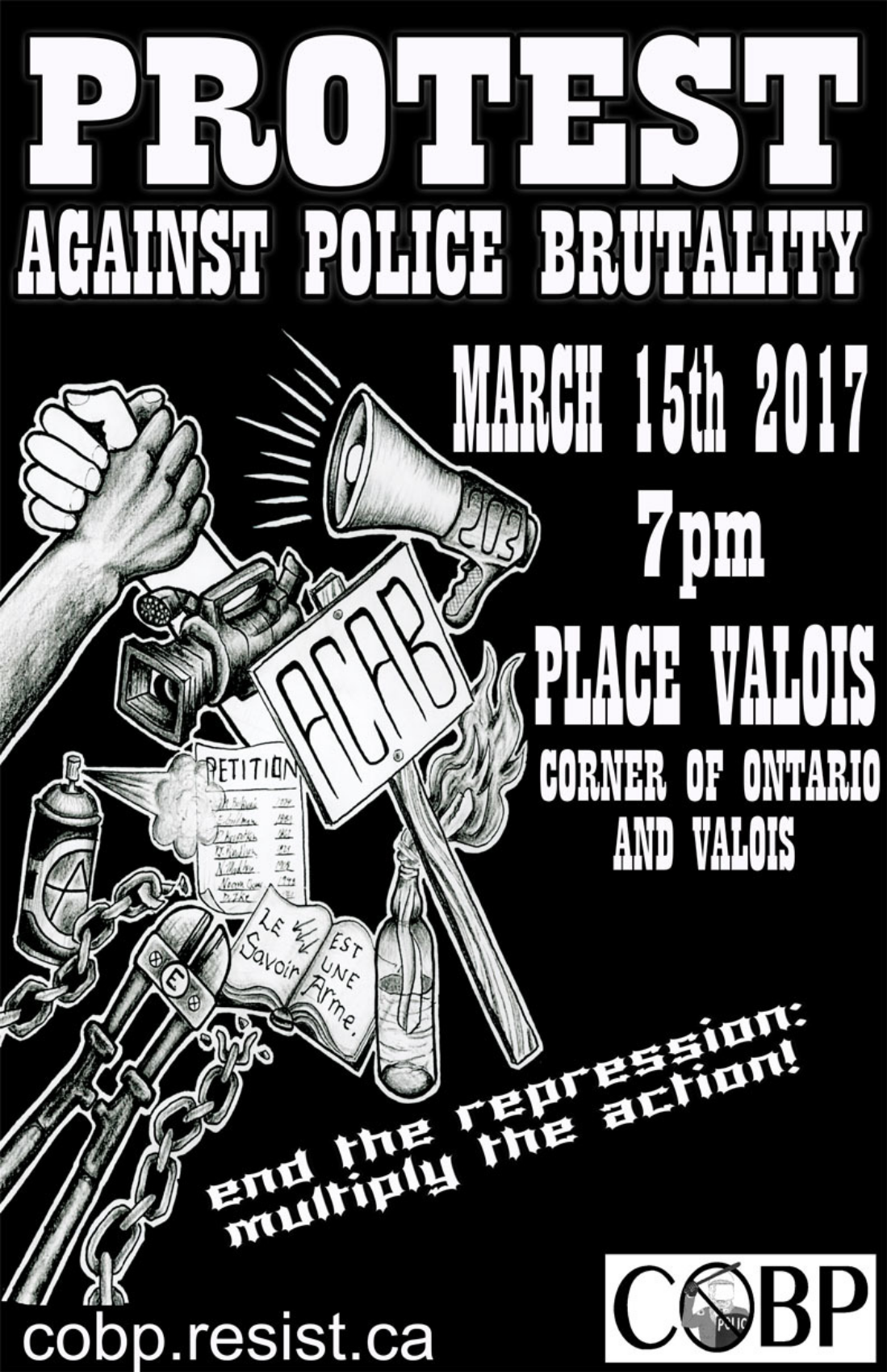