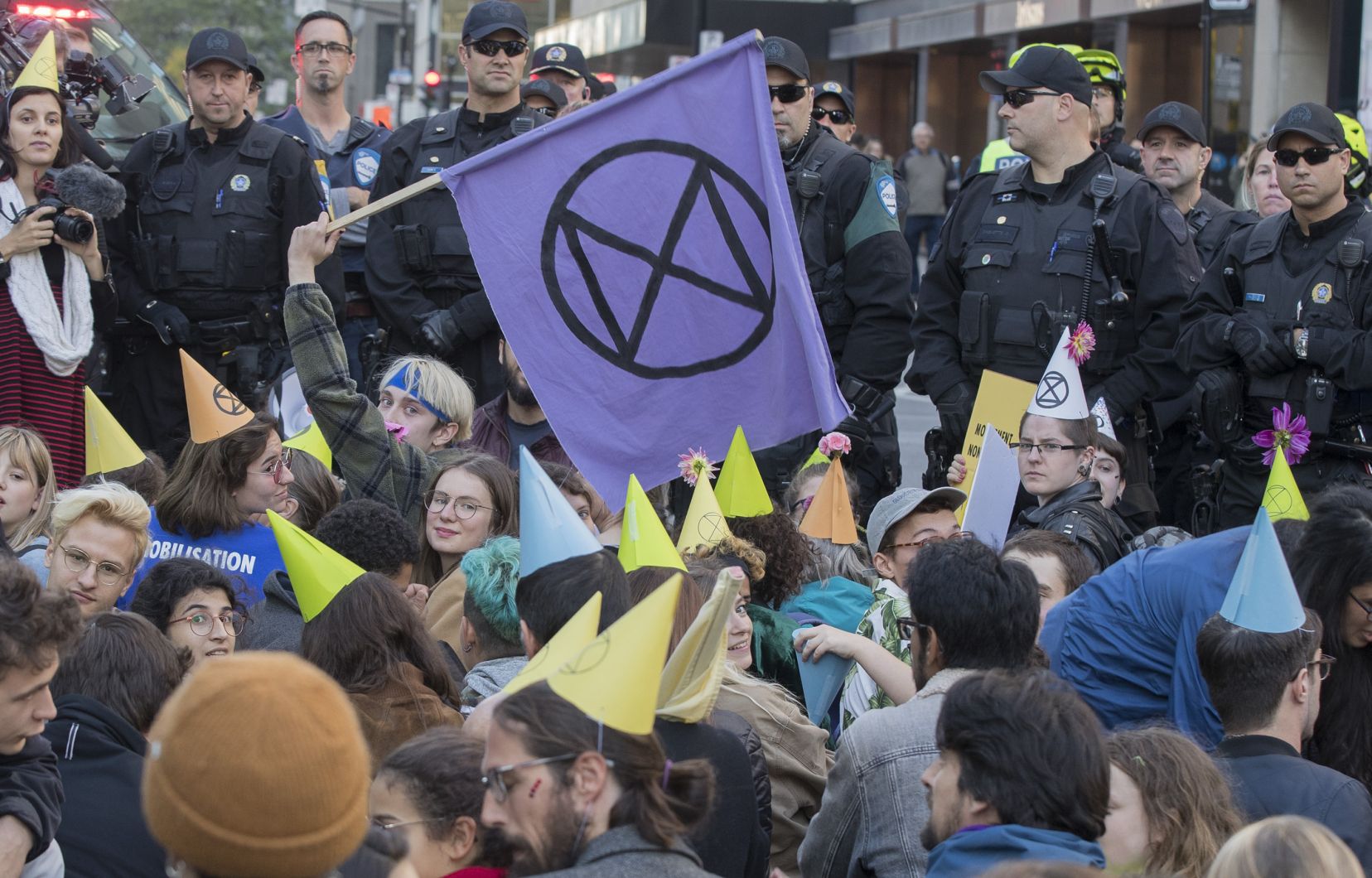 Extinction Rebellion (XR) is an international environmental movement that calls itself non-violent and as extreme as the situation. It appeared on the Montreal scene around a year ago. On October 8, 2019, a handful of their activists realized a coup d’éclat, forcing the closure of the Jacques-Cartier Bridge for more than an hour in the middle of morning rush hour. Their actions show a willingness to put themselves physically in play that has become an unavoidable necessity in ecological struggle. In this sense, their courage and determination can only be reassuring. However, criticisms have also converged from somewhat all over in regards to their ideology and practices, raising issues that are important to address.

In Paris, where XR activists, among other things, erased anti-police tags during the ocucpation of a shopping mall, an open letter notes a dismissiveness toward police violence, a dogmatic non-violence that is insidiously violent, and the exclusion of the popular classes from the action framework. They are critiqued also for lacking a strategic reading of the situation and of power relationships.

A critique of the British branch of XR observes their profound misunderstanding of the functioning and impacts of judicial repression of activists.

Almost everyone makes fun of their desire to be arrested by the police, though it is not a joke, but the result of a bizarre and dangerous interpretation of social movement history. Not to mention it favors the construction of a white, middle-class movement, regardless of efforts to give the organization an intersectional facade.

Even faced with these partisans of a particularly intransigent pacifism, it’s stunning to realize how difficult it can be to distinguish between a real XR initiative and a hoax:

PLEASE.
DEAR READER.
DO NOT DO THIS.

“At this point, should you wish to take further action, red handed people are invited to continue the procession to a nearby police station to turn themselves in. “https://t.co/O6LdO5Jy3T pic.twitter.com/rO7mPAPXJf

Others have engaged with the justifications that XR provides for non-violence. Let’s take a closer look at this. The group cites an academic study by Erica Chenoweth titled Why Civil Resistance Works to affirm that non-violent movements have succeeded twice as often as movements that used violence, between 1900 and 2006, in the context of conflicts between state and non-state forces. In such a complex world, we’d like if such neat statistics could guide us in choosing means of action. There are just a couple minor problems.

Number one: the study defines a “violent movement” as one in which more than 1000 armed combatants die on the battlefield. Thus excluding urban riots, as well as armed groups from the Red Army Faction to the Zapatistas. And indeed, struggles that lead to over 1000 battle deaths tend to be characterized by the substantial militarization of an intractable conflict, making it difficult for the non-state side to attain the goals that motivated it to mobilize at the start. The force of an insurrection is social, not military.

Secondly, for the purposes of the study, “non-violent movements” include those that are primarily, though not entirely non-violent. Note that no one is proposing a climate movement that would be primarily violent: instead it’s a question of making space for a diversity of tactics, where various modes of action are valued and ideally reinforce one another. That is to say a movement that a statistician could indeed classify as primarily non-violent, but where people in black bloc are on the front lines confronting the police, while nocturnal crews sabotage infrastructure without getting caught, allowing them to attack again and again. Nowhere in the study does non-violence translate to an obligation to turn oneself into police after breaking the law.

In any case, using Why Civil Resistance Works to ground the claim that we need to sit down in the street making peace signs at the cops is an insult to activists’ intelligence. XR’s leaders should not try to make us believe they are guided by social science if they are in fact merely enacting a morality aligned with the police state or a desire to serve as legitimate intermediaries vis-à-vis power. XR tells governments to “tell the truth”, but when it’s a question of resistance strategies, they are not interested in an honest reflection on the choices before us.

Yet, we only need to look at any of the many places where rebels have succeeded in making power back down in recent months, whether in Hong Kong, Ecuador, Chili, or the gilets jaunes in France, or to understand the history of Indigenous land defense struggles in “Canada”, to come to a simple realization: a capacity for self-defense is essential if we are going to force capital and the state to really cede ground.

We don’t wish to overly repeat critiques of XR that have already been expressed well elsewhere. And XR presents its local instances as autonomous, so we would like to give their structures in Quebec the benefit of the doubt and not judge them too much based on the group’s actions in other countries, even if these often seem like the logical outcomes of the group’s founding ideology, to which chapters subscribe.

We’re also aware that any mass political organization contains lines of tension, so this intervention certainly does not target the entire group as individuals. On the contrary, we have no doubt that many of these activists will be amazing comrades and accomplices, from whom we will learn a lot, over coming years of the development of a diversified and determined struggle against the world that is destroying the planet.

In watching XR’s beginnings in Montreal, however, we have a couple concerns regarding the local organization.

In an interview on TVA Nouvelles after the shutdown of the Jacques-Cartier Bridge, a spokesperson of XR Montreal defends the activists who climbed on the bridge against the accusation of extremism by specifying that “they’re people like you and I, who were 100% non-violent, they didn’t resist the police, they discussed reasonably.” We have questions about what is meant by “like you and I” and which people or classes of people would fall outside this designation. We must also think about the effects of this type of discourse on those who are not 100% non-violent, who resist the police, who don’t see an advantage to discussing reasonably. Logically, these people would be the “extremists”, and they would deserve the harsher treatment in the media and in the courts that this term entails.

This discourse feeds the creation of a division between good and bad protesters, which tends to increase repression experienced by those who are already taking the biggest risks, who seek a total rupture with the devastating order of capital and the state. In addition, it sabotages the creation of links between groups and individuals that would strengthen the struggle.

We’ve also seen awareness-raising efforts and a handful of sit-in style actions, the last one occurring the afternoon of October 8th after the bridge blockade in the morning. The gathering of 250 people was unable to attain the action’s target after the SPVM’s riot police lines didn’t budge faced with shouts of “we’re non-violent, please let us through!”, followed by the chant “Police, go softly, we’re doing this for your children”. The deadening scene spoke for itself as to the limits of a “civil” disobedience that is in fact fully captured within a servility extinguishing any real perspective of rebellion.

We would be delighted if events to come contradicted us, but we believe we’re seeing the same dynamics that have elicited legitimate criticisms of XR elsewhere in the world emerging in their discourse and means of action in Montreal. It’s not about rejecting any pathway that diverges from our own, but about naming strategic and tactical failures for what they are, refusing an absence of solidarity with rebels that don’t adopt total pacifism, and creating the conditions for a real collective intelligence in struggle. In the hour of climate emergency, we don’t have time for illusions.