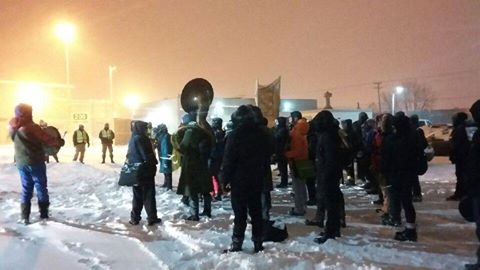 For the fifth consecutive year, a noise demo was held in front of the detention centers in Laval to wish prisoners a happy new year and show them our solidarity.

The group of about 60 people accompanied by musical instruments and fireworks gathered in front of Leclerc penitentiary, the Immigration Center, the transitional residences B16 and the Federal Training Center (FTC). The rally was also an opportunity to remember Arash Aslani, a former detainee at the Immigration Detention Center who died this year. He began a hunger strike in 2005, which led to his release after almost a month. He since continued to be involved in struggles for migrants (To know more, click here). The migrants’ detention conditions in Canada are particularly alarming, often being held for indefinite periods without charges or trials. It should also be mentioned that at least two migrants died during their detention in these centers this year.

About Leclerc’s transfer – One year later

The women’s transfer from Tanguay’s Prison to Leclerc last February brought many problems and violence against prisoners, already in a position of vulnerability imposed by a sexist, racist and capacitist prison system. The transfer carried out in a completely disorganized way created tensions related to the mixity in the prison among others in the case of strip search. The absurd time limit for the provision of basic services, the inaccess to personal effects and failure to respect the health conditions of women prisoners are serious violations that the State allows itself to perpetrate with impunity.

It should also be mentioned that the correctional officers in the prison are mostly men and that the only effort made in this direction is a simple 4 hours training on the women’s reality in prison. The League of Rights and Freedoms and the Fédération des Femmes du Québec (FFQ) asked for an observation mission to the prison in May, which was rejected by the government and the FFQ subsidies were cut due to Austerity measures. In result, half of the team was laid off, letting them unable to continue the pressures.

Currently, the Minister of Public Safety says that the opening of three new prisons in Amos, Sept-Îles and Sorel-Tracy will help transfering the 84 male prisoners of Leclerc by June 2017. He also suggested in October that he was considering the construction of a new prison adapted for women in western Quebec. This general approach of the government doesn’t seek to tackle the core of the problem and is part of a general idea of strengthening the prison system. Creating more prison isn’t a solution, it’s necessary to reduce the number of people in prison. The least would be to revise sentences for minor offenses and to explore other solutions, especially in indigenous communities who are the most affected. The actual situation creates the fragmentation of their communities, remoteness and subjects them to colonial institutions which are not recognized in their traditions (alternative justice, spiritual justice, etc.).

WE DON’T WANT BETTER PRISONS, WE WANT THE END OF PRISONS!