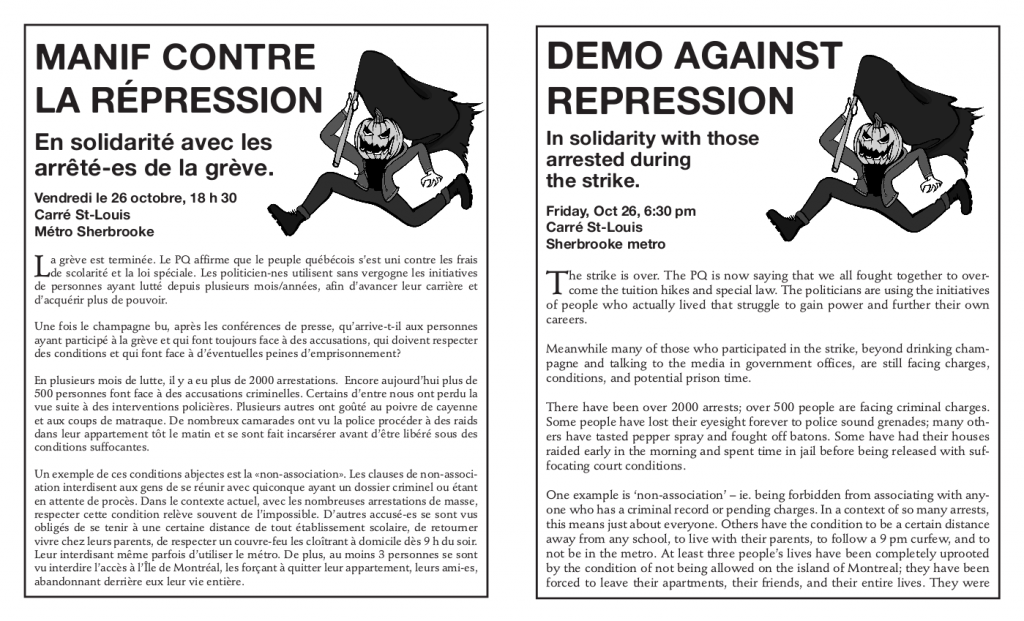 In solidarity with those arrested during the strike.

The strike is over. The PQ is now saying that we all fought together to overcome the tuition hikes and special law. The politicians are using the initiatives of people who actually lived that struggle to gain power and further their own careers.

Meanwhile many of those who participated in the strike, beyond drinking champagne and talking to the media in government offices, are still facing charges, conditions, and potential prison time.

There have been over 2000 arrests; over 500 people are facing criminal charges. Some people have lost their eyesight forever to police sound grenades; many others have tasted pepper spray and fought off batons. Some have had their houses raided early in the morning and spent time in jail before being released with suffocating court conditions.

One example is ‘non-association’ – ie. being forbidden from associating with anyone who has a criminal record or pending charges. In a context of so many arrests, this means just about everyone. Others have the condition to be a certain distance away from any school, to live with their parents, to follow a 9 pm curfew, and to not be in the metro. At least three people’s lives have been completely uprooted by the condition of not being allowed on the island of Montreal; they have been forced to leave their apartments, their friends, and their entire lives. They were and still are our comrades. Today it was them, tomorrow it could be us.

Repression – whether through conditions, Law 78/12, or the legal system more broadly – seeks to break up social struggles that threaten capital by trying to silence, scare, or isolate those who successfully challenge it, such as what happened during the student strike. The state, either through coercion (à la Liberals) or coaxing (à la PQ) has forced many back to school, trying to make them forget about the moments of freedom so dearly won during the spring. While talking about victory, it tries to erase those who fought the hardest from collective memory.

But they are not forgotten. We’re sick and tired of pompous judges deciding where we sleep, where we live, what streets we can take. We’re sick of the raids, the police harassment, and the legal system. Staying passive and doing nothing only legitimizes this repression.

What we need now is a fierce and active solidarity.

Refusing to condemn or dissociate from those facing charges, denouncing the criminalization of demonstrations, opposing targeted arrests and snitch culture, defending the legitimacy of anonymous participation in demonstrations by wearing masks, providing legal, financial, political and personal support to the arrested and forcing the state to drop their charges, taking care of those injured, supporting each other, as well as continuing, expanding, and intensifying the struggle of our arrested comrades – these are the foundations of a culture of struggle that we need to build and develop.

A struggle is nothing if it forgets its prisoners.

Let’s come together in the streets, express solidarity with all those who have faced repression in the strike or elsewhere, and show our comrades that we are with them.