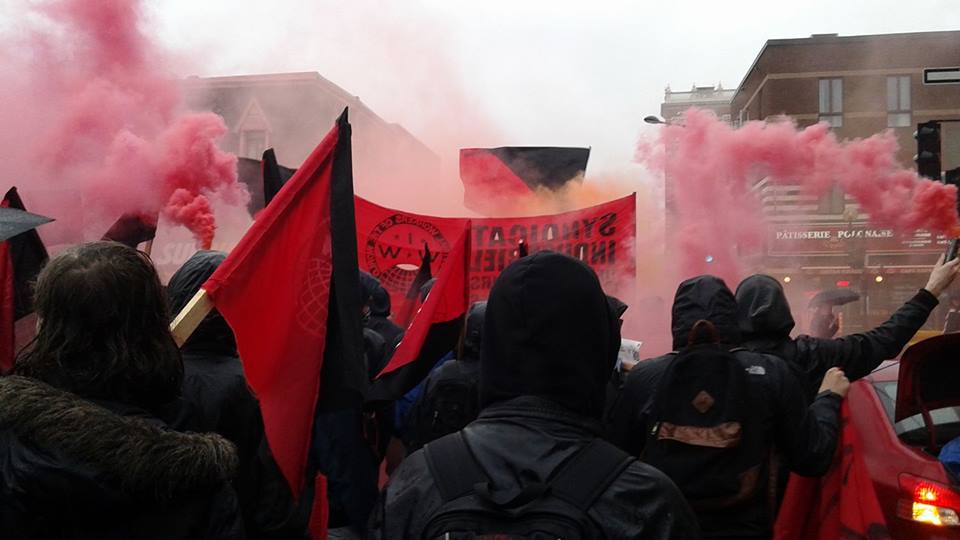 Gathering with food and speeches at 2:30 pm at Parc Metro. Departure of the neighborhood demonstration at 4:00 pm.

As workers, unemployed, students and tenants, our best defense against those who exploit and abuse us is solidarity. That is why the Industrial Workers of the World (SITT-IWW Montreal) invites you to gather and fight together in Parc-Extension on May 1st.

Our struggles are multiplying on several fronts at the same time. Just like the attacks on us. Strikes and lockouts are muted by the power of the courts, the public sector privatizes and burns its employees, our wages stagnate while our rents increase, racist speeches become commonplace to the delight of the ruling class. Holding the G7 paralyzes a complete region for wealth and power to move the planet. And all that, while the bosses and politicians share the profits.

But no matter what, we fight! Community groups take to the streets to denounce social inequalities. Tenants from working-class neighborhoods are mobilizing against gentrification. Women denounce and take public space with #MeToo. Anti-racist solidarity networks are multiplying to counter the rise of the extreme right. Nurses say, “Enough is enough!” and refuse to wear themselves out in silence. The most precarious workers are organizing and solidarity is on the rise.

We are not as isolated as bosses and politicians would like us to believe. We are not just pawns that will vote and watch as the bosses decide our fate. We fight to make ourselves heard. And that’s why we must go beyond corporatism, stand together and make the bridge between our struggles, that’s our strength!

It is with this spirit of solidarity that the SITT-IWW Montréal invites you to demonstrate on Tuesday, May 1st, in the Parc-Extension neighborhood, on the occasion of the International Workers’ Day, to chant all together: WE ARE NOT ALONE!

We invite all unions, groups and organizations to endorse our call and write to us.