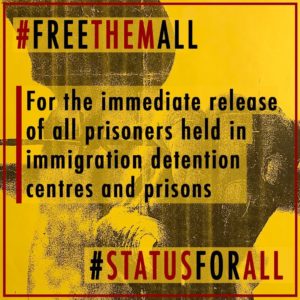 Migrants detained in the CBSA’s Laval Immigration Holding Centre suspended their hunger strike yesterday as two more of the hunger strikers, including their spokesperson Abdoul*, were released yesterday, and another today. Around 20 detainees remain in the main part of the centre, along with more held in the Rivière-des-Prairies jail in Montreal.

— SEE WHAT YOU CAN DO BELOW

The migrant detainees’ courageous 8-day hunger strike provoked an outpouring of support from coast to coast, demanding the immediate release of all detainees with adequate & safe housing ensured. The CBSA is instead slowly releasing migrant detainees one by one, through individual detention review hearings.

The strikers’ demands are even more urgent now than when the strike began. Migrant detainees and prisoners are at an increasingly high risk of contracting COVID-19. At least one employee at the Toronto Immigration Holding Centre has already tested positive for the virus. Detainees, whether in Laval or in other cities, in prisons or in detention centres, must be released immediately with adequate, safe housing ensured!

This crisis has made the necessity of removing the manufactured barriers and exclusions created by hierarchies of immigration status clearer than ever. For the good of all: Status for all!

Read daily updates from the men in the Laval Immigration Holding Centre here.

WHAT YOU CAN DO:

SOCIAL MEDIA
Use the hashtag set #FreeThemAll #StatusForAll along with #HungerStrikeLaval to show your support for the struggle on social media! We encourage you to tag Bill Blair, Marco Mendicino, Justin Trudeau, and other government officials who refuse to free the detainees.

SOLIDARITY DRAWINGS
We are calling for artists of all ages to share drawings in solidarity with the struggle to free the detainees. We encourage you to post your art to social media with the hashtag set #FreeThemAll #StatusForAll as well as #HungerStrikeLaval.

CALL IN
Continue to pressure the government for the immediate release of all detainees!
Send support statements to detenuslaval@gmail.com

Direct calls and emails to:

I am appalled that the government continues to flout its own public health recommendations when it comes to detention facilities, even as guards and prisoners test positive across the country. It is incredible that men detained in the Laval Immigration Holding Centre had to go on a hunger strike to pressure Public Safety Minister Bill Blair to take action.

Migrant detainees and prisoners remain at an extremely high risk of contracting COVID-19. At least one employee at the Toronto Immigration Holding Centre has already contracted the virus. Minister Blair has not responded to the widespread call for immediate, collective release. The Canadian Border Services Agency (CBSA) is instead slowly releasing migrant detainees through hearings. This is a wholly inadequate response to this urgent crisis.

All detainees, whether in Laval or in other cities, in prisons or in detention centres, must be released immediately with adequate, safe housing ensured.